↓
Home Menu ↓
Home→Vegan→Why are you a vegan?

Last night, my roommate asked me why I was a vegan. She went on to ask about what I would and wouldnâ€™t eat as well as other questions about wearing leather or fur. Mind you, I get asked these sorts of questions all the time, but I always do my best not to get annoyed by the fact that Iâ€™ve been asked time and time again. I have found that most people are honestly and truly curious about why I chose this lifestyle and my reasons for maintaining it. They want to understand, itâ€™s as simple as that.

I went on to explain the vegan lifestyle itself to her, and then my personal reasons for adopting into it. I explained that I originally went vegetarian at first for health reasons, hoping it would aid me in losing the last 10 pounds I so badly wanted to shed off of me after my major weight loss in 2008/2009. Then, how once I educated myself about food, and the way the animals are treated, it became a full circle decision for me. I now am a vegan for both health and compassionate reasons. Explaining to her, that after seeing and knowing what I know about how the animals are treated, I canâ€™t imagine myself ever wanting to consume them ever again. 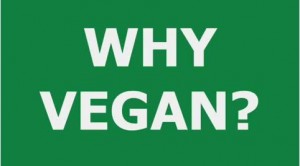 She seemed to understand, telling me that she too has seen some of the videos out there during her college studies. She went on to tell me that for a good few weeks that she couldnâ€™t eat meat herself. Hearing that, I had to ask her why she went back to eating meat if it bothered her so much. She basically stated that itâ€™s just the way she was raised, to eat meat. So, despite how upsetting the reality of how the animals are treated, she went back to consuming them.

While that is sad to hear, it didnâ€™t surprise me. Most people seem to think that way. They know, or at least understand that the cows, chickens and other animals are not treated with any dignity or respect (not even close), yet they still order that steak or chicken sandwich. Itâ€™s a form of disassociation or something. Iâ€™m not able to do that, I donâ€™t see meat in the same way that I used to before I went vegan. Itâ€™s each personâ€™s choice of course on what they want to eat or not eat, but it is sad to know that once they have the knowledge of the truth that itâ€™s still somehow okay in their mind. I suppose itâ€™s a psychological thing in a way. Iâ€™m sure there are people out there who study that kind of thing.

Anyway, I donâ€™t claim to understand it, nor do I go out and judge others on their choices in life whether it be with food or how they live their life. Sure, I do wish people wouldnâ€™t eat meat, or at least eat less of it and be more mindful of the kinds of meat they consume (ie: grass-fed), but thatâ€™s pretty much as far as I can go with it. Iâ€™ll always be an advocate for a vegan lifestyle and be more than willing to educate anyone willing to listen, but never will I force my beliefs upon someone else. It wonâ€™t do anything to make them want to change their current way of thinking unless they are open to it.