On April 1st, Skirt Sports put out a fun email about creating a skirt that would solve an issue we female runners have on long runs. They “introduced” the Trap Door skirt, which allowed us lady runners to answer nature’s burning call without bearing our assets. While it was a joke for the April Fools occasion, thousands of women emailed Skirt Sports in hopes such a skirt might actually created.

Skirt Sports is so dedicated to being there for every woman in their running wear that they knew this skirt had to happen. The good news is, the skirt HAS been created! However, despite being a well-known company, Skirt Sports is still a small entity. Product innovation can be a risky venture to get into. That said, enter the kickstarter campaign! It’s your chance to get in on this awesome skirt creation! 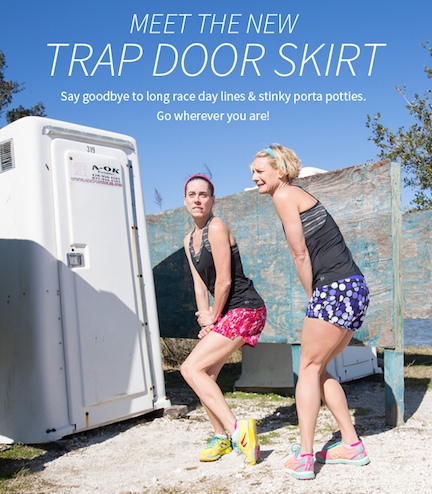 If you aren’t familiar with kickstarter, it is a way for creators to find the resources and support they need to make their ideas a reality. The creator brings the project out to the community allowing support through different pledge levels. Each level gives the person who pledges a different reward for backing the project.

The Gotta Go Running Skirt features a trap door which is a flap on the shorties secured via a low profile hook and loop. This flap fully covers you as you are on the move, but gives easy access when you “gotta go.” That relief hatch is anatomically aligned with your lady bits making an easy, messy-free evacuation as you squat. The skirt itself mimics the Gym Girl Ultra, Skirt Sports most popular skirt. It is made from lightweight, fast drying AeroLight Jersey fabric in the color black. The shorties underneath are no-creep, chafe-free 5.5″ also in the color black. The waistband is wide mid-rise with a continuous drawstring. It will stay put without rolling down or slipping off as you run. And, there are three pockets on this skirt! Two on each side of the shorties as well as one on the back. 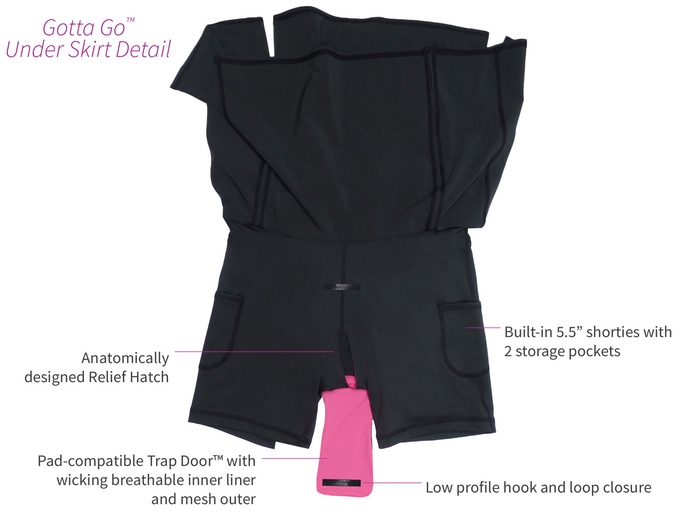 Starting pledge level is $5, which makes you an awesome sister in sport who is behind this innovative creation, as well as it will give you a special shout-out in the thank you video. If you pledge $25, this will give you a Gotta Go t-shirt, which is a kickstarter exclusive. I’m sure it will be quite a conversation starter! Pledge $65 or more and get in on your very own Gotta Go skirt. You’ll be the envy of all your running gal pals when you are done with your business all the while they are waiting for the porta potty. Pledge $95 or more and get both a Gotta Go skirt and a t-shirt. Wear them both and for ultra street cred among the running community. And, if you pledge $169 or more, you will receive two Gotta Go skirts and a shirt, making you prepared for your next relay or multi-day running adventure.

Note: I am a Skirt Sports Ambassador, so do represent the company and it’s message to empower real women in everything that they do to get and keep moving. I have not been compensated for this post, I just wanted to get the word out because I love it!