This week, The New York Times published an article about a weight-loss study done with former The Biggest Loser contestants. A six-year study was conducted with season eight contestants whose finale was back in December 2009. The project was headed by a federal research center scientist, Kevin Hall who came up with the idea of measuring what happened to people over the years following large weight loss that involved intensive dieting and exercise. In a nutshell, the results were both “frightening and amazing,” according to Dr. Hall. It showed how hard the body will fight back against weight loss.

It’s all about resting metabolism, which determines just how many calories a persons when at rest, not doing anything. For the former Biggest Losers, at the start of their season, despite being extremely overweight, they had normal metabolisms for their size. What that means is that they were burning what was expected calorie-wise for people of their weight. By the end of the show however, their metabolisms had slowed down dramatically and their bodies weren’t burning enough calories to maintain their new sizes. According to researchers, pretty much anyone who loses weight deliberately, no matter what they start at weight-wise, will end up with a slower metabolism when the diet ends. So, the slower metabolism aspect isn’t the surprise, it is the fact that the contestants metabolisms never seem to recover as the years went on post-show.

For the majority of the season eight contestants which the scientists studied, the pounds just kept coming on for them. What the research found was that their bodies almost seemed to rebel against them no matter what their efforts were to maintain their weight loss. Someone like Biggest Loser winner Danny Cahill now has to eat 800 calories LESS a day than someone would of his size, and that’s after gaining over 100lbs back since 2009. Crazy, isn’t it? The article goes on to talk about others in the study who have gained weight back, all burning FEWER calories a day than they should be for their size, no matter what they might be. The only contestant in the study that has seemed to do well post-finale weight loss is Erinn Egbert, who now weighs less than she did at the finale. She now burns 552 calories less per day than her current weight should, and she struggles greatly to maintain her current weight of between 152 to 157lbs.

The study is proving that is TRULY is harder to maintain a weight loss than to lose it. Especially, as the years go by. I have related so much to the former Biggest Loser contestants because I’ve been where they are (well less for the show experience obviously), so I understand so much of the struggles. The season 8 group became one I related to a lot since I reached my goal weight in September 2009, not long before Danny, Amanda, Tracy and company had their December finale. I’ve found myself struggling to keep in a weight-range I want to be in, especially in the last couple of years. Recently, it’s been harder. Maybe the whole metabolism slowing down can help me understand why I can workout so hard and eat about the same calories and yet find that I’m at a standstill. 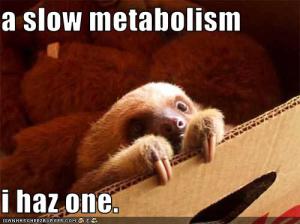 Don’t get me wrong, I’m no where near perfect, that extra 100-200 calories here and there does happen. But, if I am burning less calories a day now than I used to, it might mean that I need to really be more serious than ever on what I put in my mouth. Erin also stated in the New York Times article how a treat can turn into a binge over a three-day period. I can’t tell you how much I related to that when I read it. I have experienced exactly those feelings and binges myself. It tends to happen on a Saturday, after a long run or race when it does for me. It will start with one treat after, and end up being an all-day thing. Food was, and always will be a battle. Food logging and ensuring that I am balancing calories in and out has to be on point, period. Especially if my RMR is slower than it once was.

I’m not going to use this possible information as a reason for why I struggle with maintaining and losing weight now. Nor do I use my under-active thyroid as one. But, I think knowing these things helps me see that I’m not crazy and it’s just how it is going forward. Some of the contestants related this line of thinking after the study results. It’s about knowing what you have to work through to get to where you want to be. If you want to be healthy and fit, you CAN do it. Austin Andrews from season 11 of Biggest Loser had this to say on his blog, “When we take this journey one step at a time I believe we make clear, focused progress towards our goals, and I believe there is hope for us to become healthy.” I love what he had to say, do check out the post as well.

For everyone like me who are on this fit journey, we need to continue to believe in ourselves and what we have done and are capable of doing. I remind myself of how much I’ve been able to achieve because of the grace of God and getting healthier and fit. Even if the continued journey will be a hard one, it’s worth it. I would much rather be the person I am today than the person I was before it all began in late 2008.

What are your thoughts on the new six-year study of former Biggest Losers?
Are you on your own healthy fit journey? I’d love to hear about it in the comments! Let’s support one another!