Happy Monday, friends! How was your weekend? Mine was mostly good, less for one incident I’ll explain shortly. Otherwise, I have to say, it was pretty darn good for me. 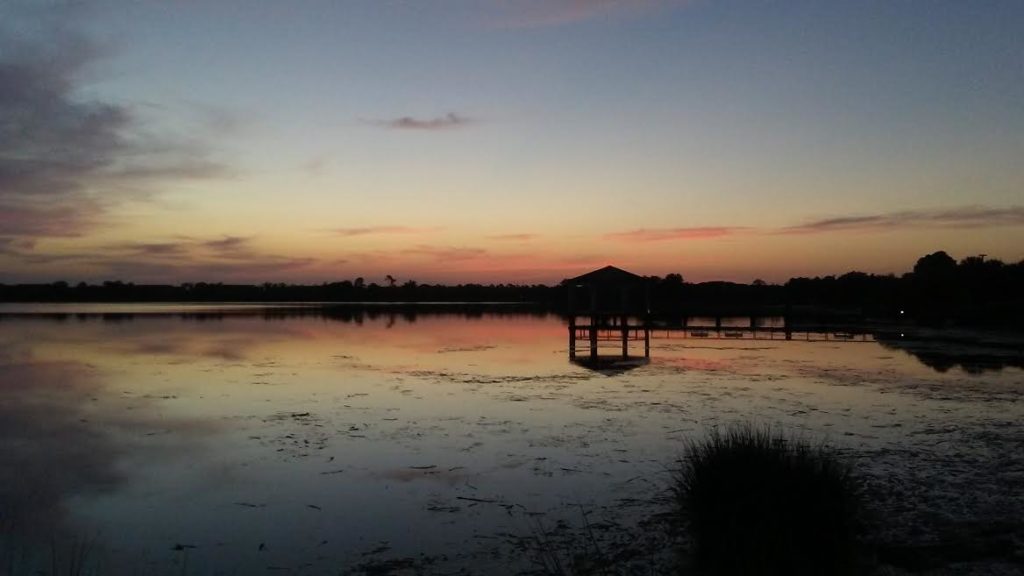 Sunrise during my morning run.

The biggie of the weekend was Saturday’s long run. While I’m not running a marathon this year, we have some runners in my group that are. As a group leader, we make sure to cover their miles with them. We had one runner that needed 23 miles and another that had 20 miles on the schedule. So, Molly (one of my co-group leaders) and I were basically splitting the mileage. She took the first part of the run and I jumped in for the last 12 miles.

Boy was it hot and just gross out. I was thankful that my back which had been bothering me the day or so prior had calmed down for the run. Despite the weather conditions, I tried to keep my mood light and joke around with my marathoner ladies. They are training for their first marathons (Chicago & NYC), and I remember how difficult the long miles can be for your first 26.2. 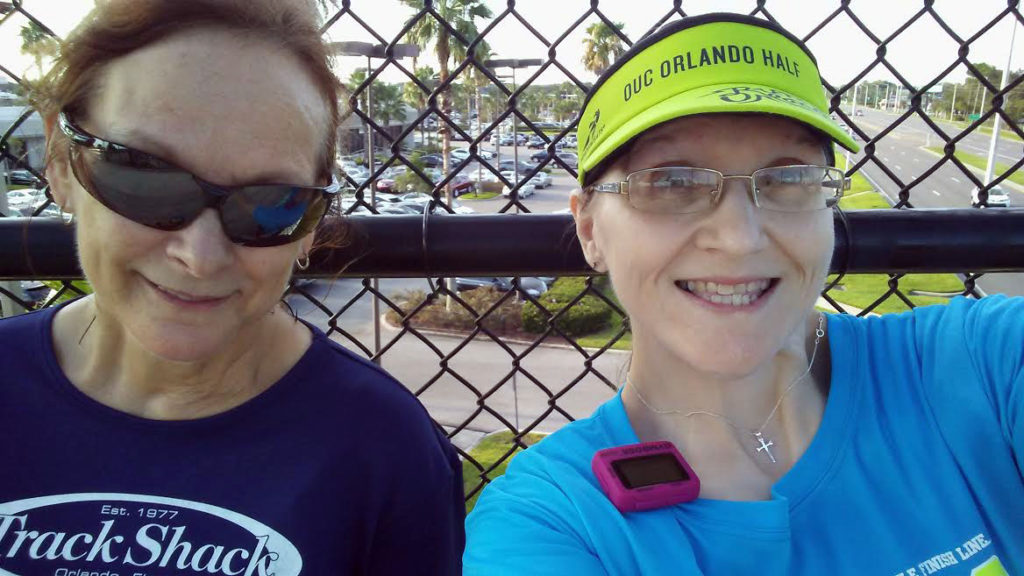 Barb and I during the Saturday run on top of the Cady Way bridge.

The last half of my 12 miles, the NYC runner went off to head back toward the school where we start from, and I continued on with Barb for her Chicago miles. She was beginning to feel some discomfort when we got down to just over four miles to go. So, we walked for awhile. It doesn’t matter how you get the miles done, that endurance still builds when you walk the mileage. Definitely helps when you get “lead legs” and are feeling like stopping. Barb is a strong runner, she’s tough and I knew that she was going to get her 23 miles done. I’ve run with her for just over three years now, and I know how determined she is.

By the time we reached the end, aka the school we were both much happier. While I wasn’t feeling sore, I was most definitely sweaty as heck and way hot. The ice towels our program director brings out are sooo awesome after a hot run. Then, the cold water, Gatorade and ice pops are glorious. Our support crew left water out later than planned and I know it was very appreciated. I can’t imagine running in these crazy hot conditions without our great support team and program director. It makes all the difference. That and the awesome friends I run with each week.

After the run, I stopped to get my post-run reward, a smoothie. Thinking about that smoothie helps during the run too, you’ve got to have a post-run treat! Then, I showered and relaxed for awhile watching the Olympics coverage. Then, I headed out to do a few errands on my way to see my parents.

Unfortunately, it was the last stop, at the local Target that proved to be the downer of the weekend. I was inside for probably thirty minutes (which is pretty good in-and-out time for Target LOL), and when I came back out, I discovered someone had hit my car. No note, nothing. Nice. It seems that someone had tried to pull into the space to the left of my car and hit my driver’s side back bumper. Of course, there was no car in that space when I came out, so I had not a clue who it might be.

When I arrived at my parents house, my dad took a look at it. He wasn’t sure it was minor at first, but since it started pouring rain, he couldn’t get a real good look at the damage. Thankfully, when he was able to really check it out later, he told me he thought it might not be so bad. The next day, he was able to push out the bumper that was pushed in most of the way, then sanded and started paint work. It still needs a bit more work, but I’m thankful that my dad is so handy and is able to fix it for me. Now, if people would be responsible and admit when they hit your car, that would be nice…sadly, there’s a lot of rude folks out there who don’t want to take responsibility when they cause damage to someone’s property. 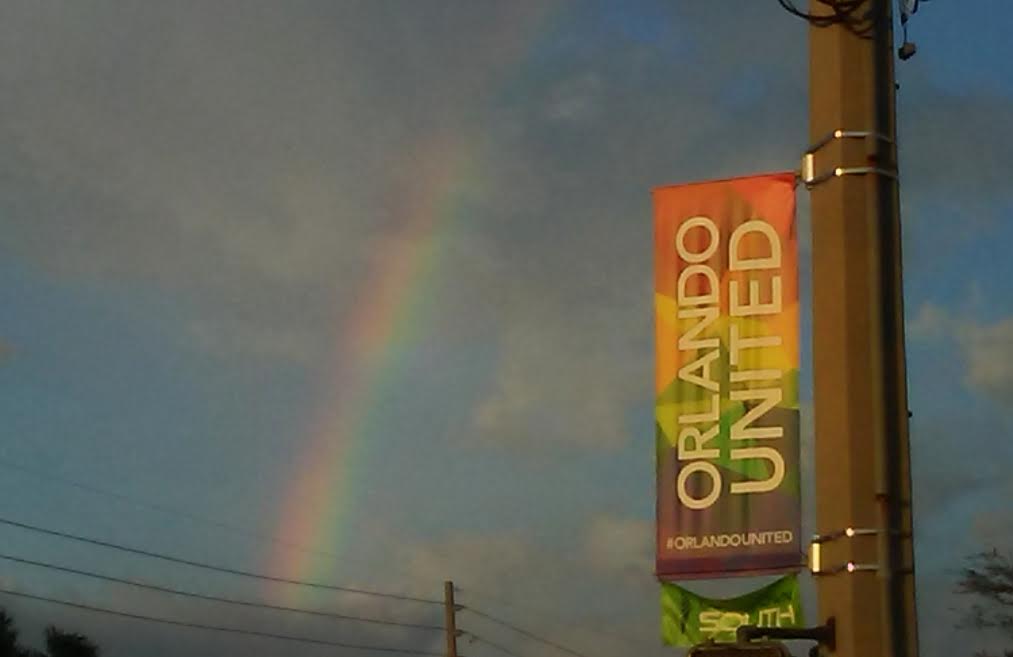 I rented the ‘Angry Birds‘ movie while I was over my parents, and we watched it Saturday night. While it had some funny parts, we found the movie to not be what we expected it to be. It was sort of odd, definitely not something I’d watch again. Compared to ‘The Secret Life of Pets‘ that I recently went to see in the theater, it was very disappointing. Usually I love the cartoon family friendly movies, just not this one.

Sunday started with church service via the live stream from my church. I love that Northland offers the streams, as my parents have been watching them a lot lately since the church itself isn’t close to them. Then, we watched the Men’s Marathon at the Rio Olympics. It was a good morning between worship and watching my favorite sport.

On my way home, after spending some quality cuddle-time with the birds and guinea pigs, I saw a rainbow. Goes to show that there’s always something beautiful for us to see. God gives us such beauty each day. We just need to open our eyes and see through all the other stuff going on in this world. Seeing that rainbow made me smile.

1. Start 21 Day Fix plan. Well, this didn’t exactly go as planned. I started it and lasted about two days on it. Not sure it’s for me. I got nauseous and just got off of it. I’m back on what I know works for me if I follow it like I should…so, we’ll see if I decide to give it another go at some point.

2. Hydration. I did well on this goal. I was drinking and peeing all the time it seemed. LOL!

3. Listening to God. Doing okay, as always a work-in-progress. I am thankful that God so amazing and so forgiving of us with all of the things that go on all around us and that we get involved in.

4. Comment on more blogs. Did well on this one last week, and I plan on continuing this goal.

5. Plank everyday. Well, I planked for most of the week, just not everyday like I had wanted to.

1. Logging my food everyday.
2. Listening to God, being thankful to Him.
3. Commenting on fellow blogs regularly.
4. Hydration. Work on getting in 60oz each day.
5. Read ‘Mornings with the Holy Spirit’ each day.

How was your weekend? Did you get in a long run over the weekend?
What are your goals for the week?