The last three days have been a bit of a whirlwind. It all began on Friday morning when I went for an 8 1/2 mile run with some of my Dream Chaser group. I ran on Friday since I had a concert on Friday night and I knew that I wouldn’t want to get up after getting back home around midnight. 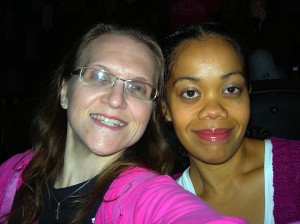 Jenny and I before the concert began.

Friday night was the Deep Hits Tour featuring tobyMac, Mandisa, Brandon Heath, Colton Dixon, Chris August and Jamie Grace as well as the Diverse City band. The concert was in Tampa and I went with my friend Jenny. After making it through the not-so-fun traffic from Orlando to the USF Sundome, we arrived just minutes before the event started. It was an amazing evening of praising God through singing and dancing. I had a blast and was glad that I was able to go. I even got to meet the beautiful Mandisa after the show. 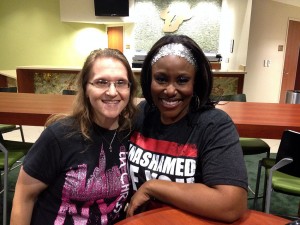 Saturday, I got to sleep in after getting home after midnight. It was kind of weird to not wake up before dawn. I woke up a little before 10am and I have to say, it felt good to get some extra rest. After a late wake-up, I got myself moving and headed out to check out the FX Show at the Doubletree Hotel near Sea World (post coming soon about that). It was nice to see a couple of familiar faces there that I hadn’t seen in quite awhile. Before long, it was time to head to church. It was a great service at Northland with Pastor Jeff talking about patience. A good topic for all of us!

Today, I’ve been doing a lot of nothing for the most part. I slept in again and just haven’t gained much energy. I did head downtown to the library on Central Avenue and then to grocery shop at Whole Foods. I had hoped to get to the gym, but I have had some sort of strain or pull above my right knee. I’m hoping that it’s just a minor muscle issue and that I’ll be good to go for running and workouts in the next days or two. But, I’m going to play it smart since my marathon is two weeks from today.

How was your weekend? Did you do anything exciting? How about your training or races?