Why is it that guilty feelings wash over me when I opt to take an extra rest day? My usual workout schedule tends to consists of working out 5-6 days a week most of the time. Two rest days a week is good for me most of the time. I run three times a week (Tuesday, Thursday and Saturday), then do cross-training on two other days which tends to be Sunday and Monday. That leaves Wednesday and Friday, which I use as open rest days. Friday is a rest day basically 99% of the time as it works out for me to rest the day before a long run Saturday. Mondays and Wednesdays have been interchangeable, it just depends upon how I’m feeling and such.

This week, I ended up resting Monday and Wednesday thus far and will resting on Friday. After last Thursdays speedier 4-miler, my back began to have some issues. With my history of a herniated disk, I knew I needed to slow things down a bit for the rest of Thursday and of course Friday. When Saturday morning’s run came, it was a rough one. My back was still not pleased with me. I got through the 7 miles, but it took more out of me mentally than it usually would for that distance and slower pace. 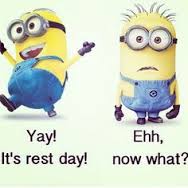 I did hit the gym on Sunday, doing a bike workout of 6 miles, still mindful of my sore back. Since I was feeling tired and sore on Monday after work, I opted to stay in and rest. Tuesday morning came and I did get up to run with my group, but after having a rough night trying to sleep, I skipped which is not the norm for me. After work though, I did head out to the gym to get in some bike miles. I wanted to get in some kind of workout. Also, I stopped by the local Target and picked up another heating pad since mine had decided to retire on me a few weeks ago.

Yesterday, I thought about whether to workout or not. It cycled through my mind all day as I worked. Obsession? Ah, maybe. Ha. I suppose I DO think about working out and running a good deal. The workday felt like a long one and by 5pm, I had my body telling me to skip the gym while my brain was whispering, “go.” There was a battle of sorts going on in my mind on whether or not to put on my gym clothes and head out the door.

Why do I and others get that cringe, that knot inside of guilt if we don’t get a workout in? For me, I think a lot to do with it is all the years I was inactive and overweight. I am always looking back at old pictures of myself when I was wearing XXL shirts and plus size pants. Deep down, I am fearful of that girl coming back out. It’s as if missing a workout is such a horrid thing that it’s going to cause me to down spiral to gain those 75+ pounds back. Realistically speaking, I know that is crazy. That it’s going to take a heck of a lot more than an extra rest day here and there to do that. But, the fear is there and it’s real. 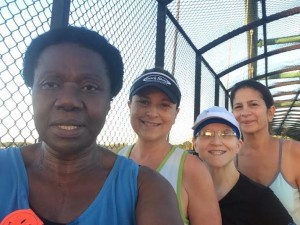 With some of my group during Saturday’s run.

In the end, I did let my body win and rest yesterday evening. Doesn’t mean I didn’t feel bad about not going to workout, but I listened to the signs my body was giving me and rested. This morning, I again laced up my running shoes and met my girls for a run. Four miles later, I felt better about myself and knew that resting the night before was truly a good thing.

I’m sure…I KNOW I will battle with this again in the very near future. It’s just something I suppose I need to work on. I’ll just have to take it week by week, and try to learn to get rid of that guilt syndrome that creeps up on me.

How about you, do you feel guilty for taking an extra rest day?
Do you struggle with listening to your body when it comes to taking it easier?