Yesterday, I had a long day. Though, most definitely not as long and tiring as those athletes that competed in the Great Floridian Triathlon in Clermont. I woke up at 4am and didn’t head to bed until after 10pm.

I woke up early as usual for my group run with my Galloway group. I was scheduled for a short run of either 5 or 6 miles. We started the run at 5am and I felt pretty dang good. I chatted with my fellow Dream Chasers and it was great. Once back at the school where we start our Saturday runs, I headed home to shower and get ready to meet my friend, Liz. We were going to go over together to Clermont. I was going to spectate/photograph my friends doing the 15k and friend doing the Triathlon there. Liz was going to register at the race site for the 15k distance. I drove over to a nearby Starbucks where we met and I got coffee for the ride. 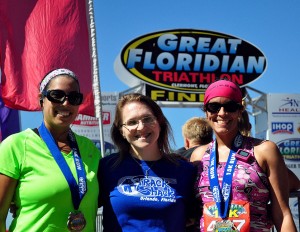 With Liz and Kitzzy after they finished the 15k.

Upon arrival in Clermont, we had more than enough time for Liz to register for the 15k. We found some of Liz’s running group (she runs with the Central Florida Women Runners) as well as my friend Kitzzy, whose fiance (they just got engaged last night!) was doing the Ironman Triathlon distance race. I then also spotted another Galloway runner from the Renegades pace group as well as some Sole Mates, Kitzzy’s pace group. It was great talking and getting to know everyone before the 15k.

Once the 15k started at 10:30am (yeah, very late start to a race), I headed over with one of the gal’s husband’s to the bike turnaround area planning on catching Jason on his first lap through. I spotted him, but he was so fast and I barely got a picture of him. Then, we went a little further over to where the 15k runners would be heading back to the finish area. I was able to get some nice photos as they passed by. 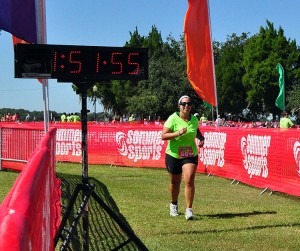 Finish line was a nice set-up, and I was able to hang out and wait for the runners to come through and get some shots there as well. Definitely a nice little 15k race. If I wasn’t doing a half marathon in a week, I would have done the race for sure (only downside was the heat). I am happy that I got to spectate and see a race from a different point of view. 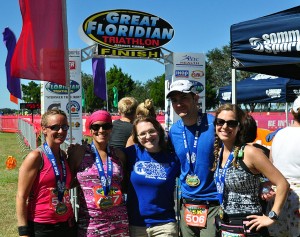 Me with the Orlando Galloway runners who did the 15k. These guys did awesome in the heat!

Once I got back to Orlando that afternoon, I decided to head over to Kissimmee for a brief visit with my parents. I got some lunch/dinner (ended up being a combo since it was so late), and brought it to the parents place. After visiting for a couple of hours or so, I went to Whole Foods and finally home again.

I want to congratulate Jason Buckner on completing his Ironman tri! He did it in 14 hours. Talk about hardcore! I admire him for his dedication and strength both mentally and physically. He is such an inspiration. And, congrats to Jason and Kitzzy on being engaged! So happy for you both, you are so great together. 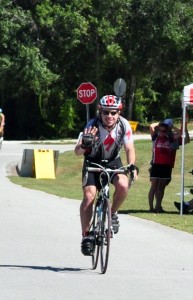 Jason on the bike during lap two. Still smiling after 72+ miles cycling and a swim!