Ah yes, it has been an insane day to say the least. I woke up before my alarm clock due to my mind having way too much thinking going on inside of it. Once I got myself moving, I headed over to my friend and fellow runner, Liz’s place. We were heading to get our race packets for tomorrow’s half marathon as well as she was going to help me check out a couple of potential places to live. 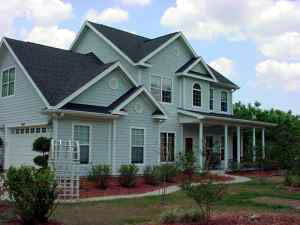 As soon as I saw the house in College Park, I knew it was my future residence. I fell in love almost immediately. It’s so cute and close to everything! I have been wanting to live near downtown Orlando, and the College Park area is also awesome. Told the owner that I really liked it but of course wanted to think about it. Realistically, there wasn’t much to think about as it just felt right for me.

Then, we drove out to Tavares to get our race stuff. On the way out of Tavares, I was waiting to turn right at a light when a car behind me smacked right into my rear bumper. “Great,” I thought, as I climbed out of the car shaking like a leaf. Thankfully, everyone was okay, no one was hurt. My car however, has a good amount of damage now. The guy apologized literally a dozen times and thank goodness has insurance. So, once a cop came and did a report, we were back on the road. Hopefully, the claim process will go quickly and smoothly. My poor car (Lilly, yes I named my car) is now in need of some major TLC! 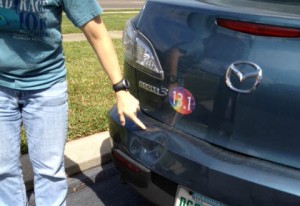 Pointing out the car damage 🙁

By this time, I had also decided to snag the place in College Park. I was afraid someone else would get it otherwise since she had at least one other person coming by. So, I after getting some money for a deposit, and making an Amscot stop (first time going there, and they are quick with money orders!), it was back to College Park. She wrote up a basic agreement and it was signed and all. I move in April 1st (well, probably March 31st really). I couldn’t be more excited about it and of course to get out of my parents house again finally.

So, there you have it, my insane Saturday. Now, I’ve got to get my race stuff ready and going and am praying for the rain to go away (weather report looks not so good for the morning). I don’t mind if it sprinkles a bit, but I have yet to run in the rain and I’ll be wearing the Traveling Sparkle Skirt, so would rather run in clear weather.