On November 1st, I will be running through the five boroughs of New York City. It will be a dream come true for me. Even though I’ve lived in sunny Florida for most of my life, I was born in New York. Life began for me on April 25 inside of a hospital in Port Jefferson on Long Island. My parents both grew up on Long Island and originally they had planned on raising a family there as well. Instead, once my fathers parents headed southward to live near the sunshine of New Symrna Beach, Florida, we eventually followed.

Despite losing my New York accent very young (yes, there are audio taped evidence of said accent), I always remained closely tied to the Big Apple. Not only do I have a good deal of family living there on both sides, but I always felt like it was a part of me. I have always loved my vacations to New York, going to see Broadway shows, exploring Ellis Island and the places where my parents grew up. There’s a fascination and intrigue to New York that is like no other place. 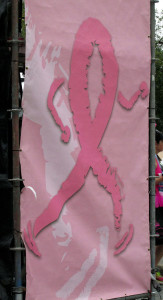 Getting into the NYC Marathon through the lottery was an amazing day for me. I still pinch myself every once in awhile wondering if I’m dreaming. Friends close to me know that I talked about running the marathon for the last year and how I would run it for a reason no matter what. So, when I was blessed with the lottery acceptance, I knew who I would be running for. There was only one charity, one cause that has become near and dear to me. That is, the 26.2 with Donna.

My hope is to raise at least $1,000 for the DONNA between now and race day. The 26.2 with Donna has done and continues to do so many amazing things in both research through the Mayo Clinic as well as helping survivors through The Donna Foundation. Every dollar raised by this organization goes to the cause. It’s the only breast cancer charity out there that does this.

The stories I’ve heard from recipients of The Donna Foundation as well as the research that Mayo has been able to do toward a cure to finish breast cancer are nothing short of awesome. I will be posting some of the stories and more about what the Mayo Clinic is able to do during the next few months. It’s important that you know the impact your donations have on the lives of so many people.

I want to thank everyone who has support me and the 26.2 with Donna over the last couple of years as I’ve been blessed to be an Ambassador for the event. It’s changed my life and I only hope I can share some of the greatness with you all in some way. If you ever have any questions about the cause or the race event itself, please don’t hesitate to ask me. I love talking about the DONNA (if you hadn’t already figured that out, LOL).

Here is the new link to make a donation for the 2016 26.2 with Donna Marathon that is coinciding with my effort to fund raise for New York. The DONNA isn’t as yet an official charity for the NYC Marathon, but I look forward to being able to represent them in the Big Apple this year!