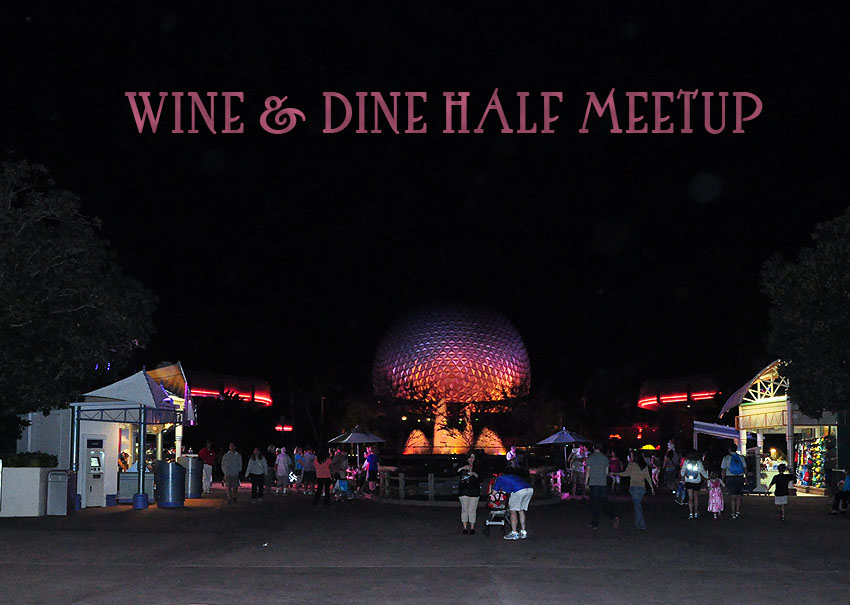 On the evening of Thursday, November 7th, I was fortunate enough to have been a part of a runDisney meetup event. runDisney holds meetups for bloggers and other runDisney race enthusiasts during every race weekend. There guests are given the opportunity to not only run with greats like Jeff Galloway, but to hear about new runDisney news. This however, was a special meetup as it was the first-ever night-time runDisney meetup.

This night meetup began at 7pm at EPCOT Center. I arrived on Disney property around 6:30pm and after parking, walked the short ways to the entrance of the park. Upon arriving at the entry to EPCOT, there were tables set up with cast members and runDisney folks aiding us in getting our special Wine & Dine runDisney edition shirts and park passes for the evening. It was during the check-in that I had my first “real life” meetings with a number of fellow bloggers. I met Heather, Erin, Kimberly, as well as other awesome folks. 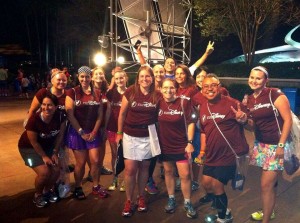 It was then time to head into the park for some fun! We were given a fast pass for Test Track, so I headed over there first thing with a group of fellow meetup participants. I had forgotten that Disney revamped the ride about a year ago, and it’s been at least that long since I’d been on it. It’s quite different now than it was originally. No longer do they have the test lab folks directing your car’s every move, this time, it’s all automated. Before you board your test car, you get to design your own car. This is the biggest change IMO and I loved it. Very cool that you can choose your car’s design, including style, color and add-ons. Then, when you board your car, you are “testing” it against other designers cars for how fast and efficient your vehicle is. I designed a pink car with ‘warp drive’ type additions along with another gal and we had a blast doing it. Then, the ride itself was an awesome one, I like it a lot more than the original Test Track ride. Of course, the end fast portion is still there which is always fun. 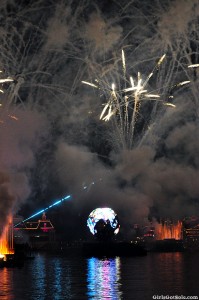 After Test Track, I ventured off on my own until we had to meet up for Illuminations. I had a nice time just walking around the Food & Wine Festival and even found something to try in Japan. I had the Youki Tofu with grilled vegetables which was topped with Miso sauce. It was pretty good, but I wish they gave me more vegetables with it. That’s the thing about EPCOT’s Food & Wine Festival, you’re basically getting a very small portion, so it takes more than that to make a meal. After enjoying my Youki Tofu, I looked around a bit more before making my way over to Mexico where the group would be meeting to view the fireworks show.

Meeting up with the rest of the bloggers and runDisney enthusiasts before Illuminations began, I had a chance to talk to great people. I loved hearing the enthusiasm for running and the runDisney events. I chatted with a few people, some bloggers, some not before the fireworks show started. Illuminations is an awesome presentation and Disney knows how to do fireworks! It’s always a fun show to watch. 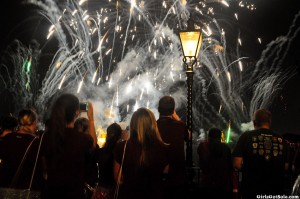 Once Illuminations was over and the park cleared out from most of the guests, we walked over to the Garden Theatre. This was where the presentations would be. As we entered, there was food and snacks for us set up. They had a Vegan Curry Chikn patty with rice, Vegan wine, various fruit, and cookies. A very impressive spread, especially with the vegan options! I was definitely impressed and enjoyed both the vegan items and some fruit. Before the presentations started, we had time to mingle some more as well as take photos with Mickey, Minnie and Goofy who came out to see us. 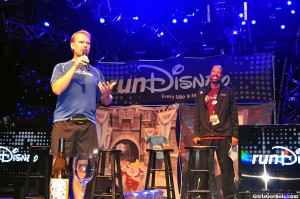 The presentation opened up with Sports Media Director, Darrell Fry greeting everyone. After speaking briefly, Darrell became extremely popular with his announcement that there would be some giveaways coming up. He then introduced Faron Kelley, Director of Marketing & Communications for Disney Sports. Faron also spoke a bit about runDisney and then the giveaways commenced! They gave away some runDisney rolling bags, New Balance runDisey shoes and three entries to any Disney race! Talk about some awesome giveaways! I didn’t win anything, but congrats to those who did!

Jeff Galloway and Tara Guidis were up next, and you can’t ask for a better duo. Jeff is the expert on all things running, and Tara on all things nutrition. They truly are not only the most knowledgeable in their areas of expertise, but they are the sweetest people you’ll ever meet. They spoke a bit about training and race weekend does and don’ts. They told us that they love to talk to runners, so be sure to ask your race and/or training questions concerning fitness or nutrition to these two at your next runDisney expo! 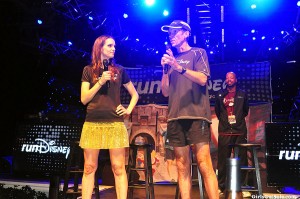 Some of the culinary experts/chefs joined us to talk a bit about the food we had that evening as well as the Food & Wine Festival. I loved hearing all about the vegan wine and vegan food options they were offering. Disney plus vegan makes me happy! I look forward to seeing what other vegan food items Disney offers soon, as I’m sure this is just a taste of what is going to be offered in the parks.

New Balance then came up to the stage and spoke about the runDisney shoe and all about the new 2014 model that will be hitting soon. The new version of the shoe will have the ability to be customized for your runDisney race(s) using inserts specific to your race! And, they will come in a runDisney box unlike the 2013 model.

Olympian and Orlando local, Jenny Simpson joined New Balance on the stage for a few questions and to talk about their line of reflective wear which she uses herself. Simpson is known for her performance in the 1500m with a time of 4:03.35 this past April. She also is the American record-holder for the 3,000 meter steeplechase at 9:12:50. 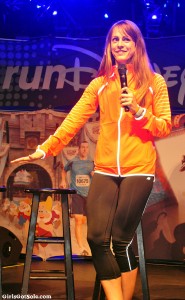 After the presentations, it was time to run! There was two groups; one would be running straight without walking and the other with Jeff Galloway doing 20:20 run/walk/run intervals. I went with Jeff of course and it was great. The interval was a new one for me, but how cool is it to not only run with Jeff Galloway, but to run around EPCOT when the park is closed? Talk about a beautiful sight! We ran around World Showcase one and a half times before heading out toward the entrance of the park. Here, we took some group photos with Mickey, Minnie and Goofy.

The evening ended with a toast with either champagne or sparkling apple cider. Talk about a wonderful evening! It was a great time, and I hope to be able to do another runDisney meetup soon. 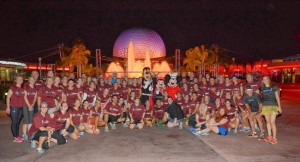