I ran two 5k races this weekend. On Saturday, I ran the Reindeer Run, which is a fun 5k, and on Sunday, the Mt. Dora 5k. I’m going to combine the two recaps into one blog post, but will break them down separately.

Reindeer Run 5k
The Reindeer Run is Track Shack’s annual Christmas fun run. Up until 2011, it took place at the RDV Sportsplex, but has since been located at Sea World Orlando. I’ll be honest, I’m not a fan of the venue, as I would never go to the Sea World parks. This race however, benefits Florida Hospital for Children: Hematology & Oncology Program. As well as the race also participates in a Toys for Tots drive at the event. 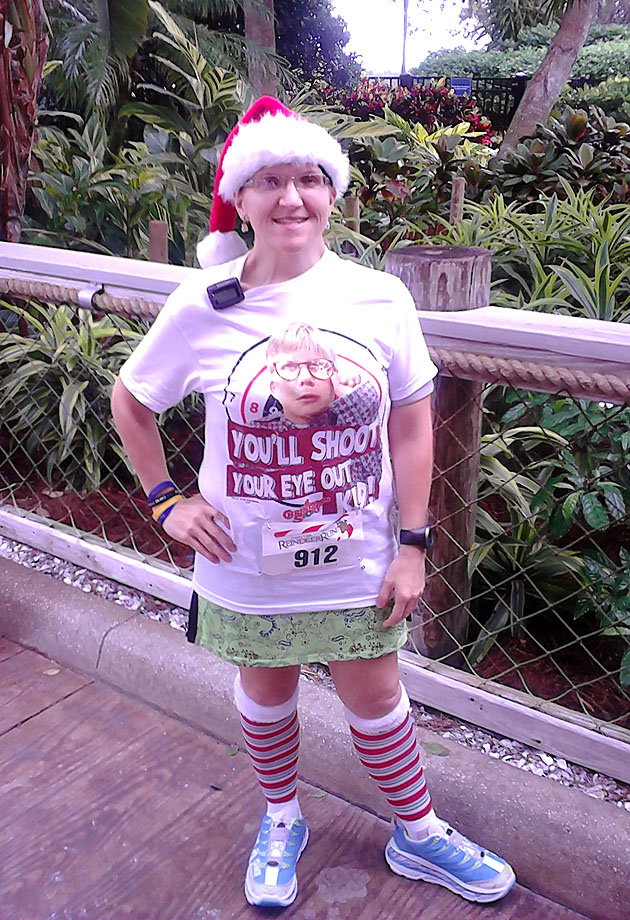 I arrived at the race almost an hour before the race was scheduled to start. I did the usual port-o-let stop and then met up with friends who were also running. I wore ‘A Christmas Story’ shirt, green Skirt Sports skirt, Christmas knee socks and my new Hoka One Ones for this one (and my santa hat of course). At 7:15am, the runners began (walkers started about 15 minutes later to scatter the field of 4500 participants a bit), so we were off. I ran with one of my fellow Dream Chaser girls, Gloria for most of the race and we opted for 30:45 intervals. I was originally going to go with 1:1s, but went with the shorter intervals. The first part of the race goes through the parking lot because there isn’t enough room inside the actual theme park for a complete 3.1 race. So, of course, that part of the race isn’t so exciting. But, I was enjoying myself checking out the costumes along the way.

Once inside the park, it got seasonally festive pretty quickly which was nice. I admit, Sea World had the park decorated very beautifully. The fake snow portion was nice too, less for the slippery ground that it made in that area. The race also had a number of spots that got crowded, so weaving was even difficult. But hey, there were 4500 of us out there!

I crossed the finish line in 39:12, not my best 5k time by far, but I didn’t set out to try to P.R. and this race isn’t chip-timed anyway. It was a good time and I enjoyed it. 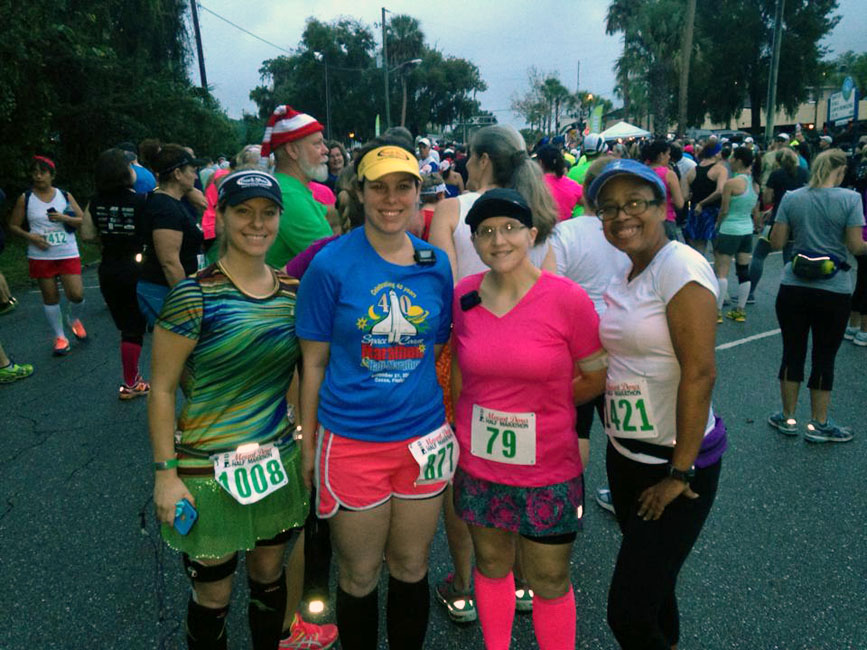 Before the start with Jenn, Kerrie and Stacy.

I don’t think I’ve done two races in one weekend before, so this was a nice little “trial” of that feeling in case I want to do a back-to-back challenge in the future (Glass Slipper, I’m looking at you for 2015!). After getting a bit lost due to my own lack of good planning, I arrived at the race site about 30 minutes before the 5k was set to begin. There was also a half marathon and most of my running group was doing that distance. I opted to just stick with the 5k after my marathon on December 1st.

After the half marathon race started, we waited about 10 minutes and then the 5k headed off. Right at the start, there was a hill which just seems wrong. Thinking that maybe that was the worst of it, I pushed onward. I love the part of my brain that had that wishful thinking, because hills would be the theme of this race (and this was just the 5k!). 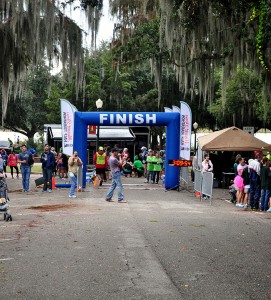 There were 2-3 more hills along the way as I chugged along. Or, maybe huffed and puffed along would be a better description. I was feeling pretty good, but it was a bit rough. I opted not to wear my Hoka One One shoes on this one since my legs were still feeling tight in my calves mostly after wearing them on Saturday. I was moving along pretty well, but I would have liked a bit better of a pace.

The nice thing about this race is that the finish line is kind of right over a railroad track (and that darn hill we went over to start, but at least it was downhill now), and you can see it straight ahead of you as you come over. It was a pretty open road so that was great being able to come into such an open finish. I crossed the finish line in 38:37, which again isn’t a P.R. for me (my 5k P.R. is 36:36 from Run for the Trees back in April), but I was pretty happy with the time. We also got a medal for this 5k which was a great perk, very rarely do you get bling for running a 5k. 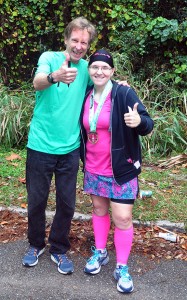 Overall, I’d say that I liked this race. It was a nice little town, and if I trained better on hills, I think I could do better on time. Oh, and I could have done without the bit of light rain we had around mile 1.5. At the end of the race, I got to meet running legend, Bill Rodgers, so that was definitely a perk!

After the race, I went and grabbed some Starbucks and came back to support my friends running the half marathon. It was nice to be able to spectate and get some pictures of them coming into the finish chute.