On the 4th of July, I ran the local 5k to start off the holiday. Track Shack‘s Watermelon 5k is sponsored by Hunter Vision and it brings out hundreds of local runners, walkers and families to the July event each year. While I have volunteered at the event a couple of years ago, I had never run it. So, I was looking forward to it. 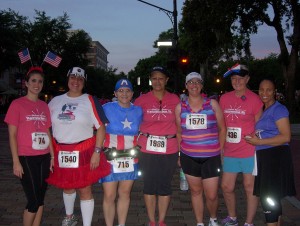 With some of my running group during our “stroll” down Park Avenue.

I arrived in downtown Winter Park a bit before 6am and parked easily. I then walked the block or so to find my running group, as a number of them were also doing the race. It didn’t take me long to find some of them and then we headed for a bit of a stroll/warm-up before the race began at 7am.

At about 6:45am, we made our way to the starting area and positioned ourselves a bit after the 10 min/mile sign. After the National Anthem was played, we were off. What was nice about the Anthem for this race was that they had a big American flag up atop a fire truck so that we could all see it better.

Once we hit the starting area (since this wasn’t a timed event, there weren’t mats), we began to run. We had decided to go with 1:1 intervals and stick with that. With the crowds though, I knew the beginning would be a bottleneck. It usually is, especially in such a crowded race. Another group shot taken before the race start.

There were about 8 of us together at the beginning, but that ended up splitting up a bit after the first mile. I ran most of the race with three of my Dream Chaser girls. The brick roads of Winter Park aren’t the most fun to run on, so I did my best to not think about that part of things. I am used to running on it though since we run on brick a good deal of time during training runs.

By the second mile, I was ready to be done, the heat was really getting to me. It made me remember why I have learned to like our crazy early 5am runs. At 5am, it’s still humid, but the sun isn’t beating on you making things more intense. When I saw the finish line, I couldn’t have been happier. I was glad we were only doing a 5k. 🙂

After the race, we enjoyed ice cold watermelon, sno-cones, hummus, and of course the usual water and bananas. Less for the heat, I had a great time with great folks. Always a plus in my book. And, I finished the race in 40 minutes, not close to my best 5k time, but I wasn’t out there trying for a PR. 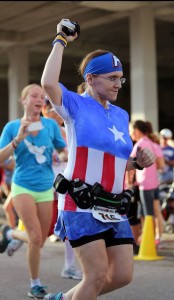 Finishing photo as capturing by The Orlando Sentinel