On March 29th, I ran my 10th half marathon. 1-0, ten. I never thought I would be running in my tenth half marathon, let alone writing a race report about it. I did my first-ever half marathon back at Space Coast in 2011. If you would have told me then that that race was one of many more, and that I would be a Half-Fanatic, I would have smiled and thought you were a bit nutty. Now, I love running so much that while some training runs and races have their tough moments, I can’t imagine not lacing up and getting out there. 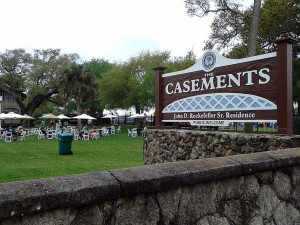 Where the race start/finish took place.

On Saturday morning, two of my running group friends came over and we carpooled over to Ormond Beach where the Tomoka Half Marathon was being held. It was raining as we drove out there and all we could think was, please just dry out for a few hours. Once we picked up our race packets and got our bibs on, it did just that. Talk about luck…or, as I call it, a blessing from God. We waited at the start for way too long. Something caused a race delay of 29 minutes. Not sure what it was, but thankfully, I had good friends to spend the time waiting and chatting with. 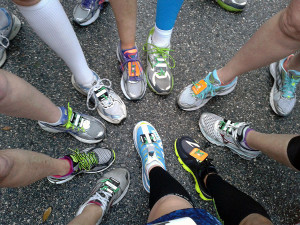 Shoe shot before the race start.

Once the race gun finally went off, I hit my Garmin and was off as soon as I hit the timing mat. I was running with one of the girls I had rode in with, but within feet of a number of others in my running group. The two of us had agreed to run a 1:1 interval, as I told her that I would love to PR at the race if I could. We were doing pretty well for most of mile one with that interval despite the narrow path we were on which was also full of other runners. By mile one though, we both agreed to change to a 30:45 interval (running 30 seconds, walking 45 seconds). This was the interval that a few of the others in front of us where doing (we even played a bit of leap frog with them during that first mile), so it made sense to change things. By the time we hit the bridge however, my running partner was slowing down. Of course, part of wanted to linger back and wait for her, because I don’t like leaving a running buddy behind. But, she knew I was hoping to get a new PR, so she yelled to me to keep going and get my PR. After a moment of hesitation, I did.

I ended up running with a few of the girls in front of me from my Galloway group, but lost them after a few minutes when they took off. I wasn’t alone for long though, as three other girls from my group were right behind me. So, I ended up joining them from that point on. I hadn’t brought my iPod or headphones with me (first time not even carrying it…usually I wear it and just don’t use it at all or much), so I was definitely glad to have company as much of the race as possible. Running alone makes me want some music to pass the time. 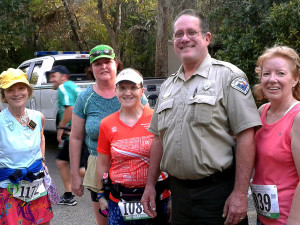 A quick photo op with a Park Ranger.

When we hit the Tomoka State Park around mile six, it was pretty neat. Well, less for some large puddles inside of the park which you had to maneuver around after the heavy rains. There were a number of State Park officers and employees out there to cheer the runners on which was nice to see.

By about mile eleven, I ended up taking off from the gals I was running with. They were slowing down a bit and while I was sore (had some tightness in between my shoulder blades), I was still hoping for that PR. As I came up to that darn bridge (yup, it was an out and back course!), I grimaced and trudged onward. It was the hardest part of the race for me, and I remember saying aloud to myself, “I can do all things through Christ…” while I was making my way up it. When I was coming down, I spotted the finish line to my right. This put a smile on my face, I thought, so so close! As I came down to the end of the bridge however, I soon realized that we had to turn left instead of right and loop around under the bridge to the finish. The smile quickly faded from my face and I was not impressed. I was just ready to be done! Thankfully, it wasn’t far, in fact, it was less than half a mile. Of course, the end can sometimes feel like an eternity. 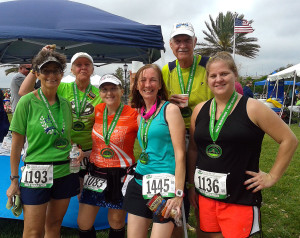 Post-race with some of my running group.

As I gave it the last bit of energy and push that I had, I crossed the finish line in 2:54:48, a new half marathon PR! My previous best was 2:55:38 at The Biggest Loser Run/Walk back in December. It felt good to get a shiny new PR and finish strong! Even though this race had some rough points for me (the bridge), I would do it again next year. 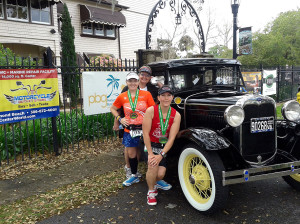 They had some cool old cars on display at the Casements.