This was one tough race! After tracking potential race day weather the days before, it was feared that it was going to be a rainy and cold one. The drive to Tavares was definitely rainy, but thankfully, when I arrived with my friend Liz, the rain had passed through. But, there was another weather issue, the wind. It was brutal and cold! Honestly, I was not expecting that, so I had on my Solomon shorts under the Traveling Sparkle Skirt I was wearing. Once I got out of the car and we made our way to the race start, I quickly realized, the shorts were just not going to cut it. Ended up running back to Liz’s car and doing a quick changing act into my capri tights. Then, back to the race area we went. 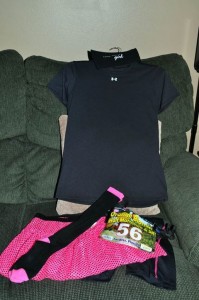 While awaiting the race start, we huddled up near other runners, including Jason and Kitzzy. Everyone was just trying to stay warm as the winds were what was making things so tough. The race finally started about 20 minutes late and we were off!

I took the first mile way too fast (12:46) since I was trying to keep up with the crowd of other runners. I had to find a place to slow down and walk, as I didn’t want to cause a pile up behind me. I also took mile faster than I should have as well (12:57). It’s nice to know I can do that pacing with the intervals, but I knew going out too fast at the beginning was not the way to go.

After mile two, I started to feel the wind. It was really knocking my energy down and just making me feel like I wanted to stop running. Honestly, I hate running in the wind. Especially when it’s a cold wind like this one was. To note what I was wearing, I had on an Under Armour short sleeve top, Pearl Izumi arm sleeves, capri tights, and a bondi band. I began to wish I would have grabbed my windbreaker when I changed at the car. It was that chilly. My windbreaker has removable sleeves, so it would have been fine even if I warmed up. But, it was too late, I was out on the race course. 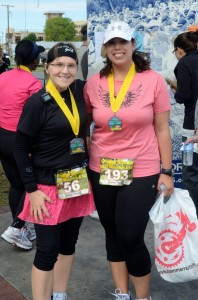 With Liz after the race

Miles three and four were actually not too bad. I was able to stay around 13:40 for each mile which is the pacing I planned on keeping for the race. By mile five, I slowed down. It was then that I began to question my sanity and why I was doing this race. The negativity had hit! I started asking myself why I was crazy enough to be out in these horrid winds and running a half marathon at that. I even considered quitting the race and foregoing the bling. Yup, I was in that kind of place. Somehow though, I kept pushing. The other side of my brain came into the conversation and started some positive talk. “You can do this, you just have to do it one mile at a time.” Also, seeing some of my friends passing me on the circle back was encouraging. I saw each one of them three times. The smiles and encouraging words yelled my way as I was struggling were a big help. They are awesome. 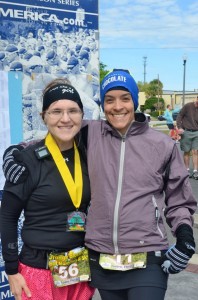 I was able to pick up some speed again at mile 8. I did it in 13:28 which felt good to see on my Garmin. At this point, I knew that I was getting oh so close to the last 5k and I told myself that we were going to have the Clif Mocha Gel right around mile 10, so somehow, that got me moving (I did have a peanut butter Gu that I took half of about 50 minutes in, then the rest of it after 10k or thereabouts). Came in at 13:44 for mile 9 which was a bit slower than mile 8, but still good.

Since I slowed down and walked an extra minute as I took my last gel around mile 10 with the water stop, I came in at 14:18. One of the slower miles, but I again picked up the pace at miles 11 and 12 (13:46 & 13:43 respectively) and was giving it my all on my running intervals at that point. As I hit the mile 13 marker, I knew I could really go out and give it all I had left (which honestly was not a lot), and did it in 13:15. Seeing the green cones coming down the line toward the finish, I took a deep breath and just ran. I wanted to finish as strong as I could and I knew that I was coming up to three hours and the time I wanted to by done by. I heard the announcer saying my name and everyone cheering me on as I sprinted across the finish line. I was spent, but more than glad to finish! A lady put my medal around my neck and someone handed me water. I felt very supportive at the finish as I had my timing chip removed. There was definitely good support on this course. These volunteers and workers dealt with the same harsh winds and were awesome for it in my book. 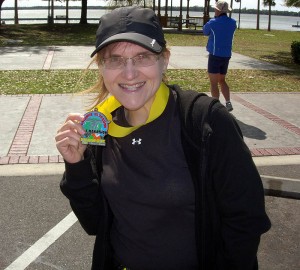 I didn’t know where the post-race food and such were, so by the time I got over, there wasn’t many things left but junk food like cookies and donuts. I was glad that I had a protein bar in the car, so Liz and I headed there. I took off my Brooks running shoes and put on my C9 slip ons which felt much better on my feet. Sure, they looked silly in the pics we ended up taking after walking back over to the race area, but after running 13.1 miles, I didn’t care. Being comfortable was more of a priority in my mind. I also took off my bondi band, pulled my hair down and put on my hat. On the drive home, we stopped briefly at a Starbucks where I got a Peppermint Mocha. All in all, it was a good race despite how challenging the winds made it. I think if the winds would have calmed down, the weather would have been about perfect. 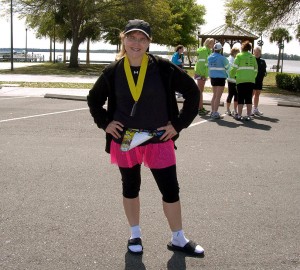 Slip ons are so comfy after a race