Disclaimer: I was provided a free race entry in exchange for blogging about the race event. No other compensation was received and all opinions are my own.

The Excalibur 10-miler is an inaugural race created by the awesome folks at Running Zone who give us the race favorite, Space Coast Marathon/Half Marathon each year. This race was so unique with it’s medieval theme that I knew I just had to run this new event.

After running the Best Damn Race 10k the day before and this being my 3rd weekend in a row with races, I was a little tired when I arrived at the race to pickup my packet. The race was taking place in Viera, which is about an hour away from Orlando, so I just opted to get my bib and all race morning. On the good side of things, I picked it up quickly and was able to relax in my car for a bit before I had to get moving to the starting area. 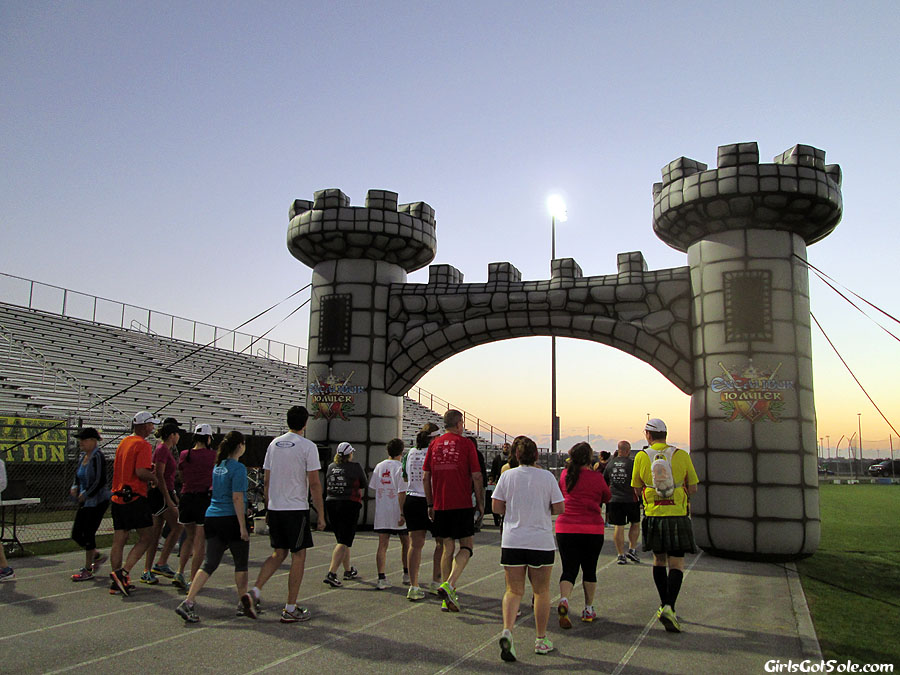 Runners heading to the race start.

The race staff lead everyone a bit away from the runner’s village section to an area near the start where the runners were to gather into two groups. When you registered, you had to choose a side, blue or maroon. This was a fun way to bring some medieval competition to the event. One the two groups were facing one another, there was a sword fight put on by Medieval Times. It was a neat way to kick off the race. 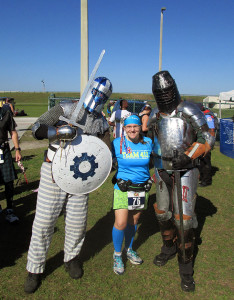 After the medieval sword fight, we were off! I had found some of my Galloway girls and the three of us started the race together. While I was hoping to keep a 1:1 interval, I knew that would likely be short-lived. I kept up a pretty nice pacing (with the first two miles in the 12min zone) until about the halfway point. At that point, I was just running with one of the girls, as the third had slowed down after a couple of miles. I told my friend that I was slowing down and she took off ahead of me. Not long after that, the third girl from my group had caught up to me and we decided to run together. We switched the interval to 30sec run to 45sec walks.

For the next 2-3 miles, we had a nice chat as we did our run/walk/run intervals. This really helped pass the time, and it was great getting to talk to someone I haven’t seen much of lately. There is a long dirt path/trail strip that you are on for what feels like forever. This was the only part of the course I didn’t like. It was dirt and telephone poles and that was it. Definitely need some kind of entertainment or something on that portion if they keep the route the same next year. 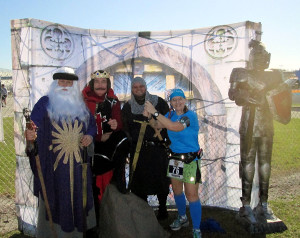 By the time we hit mile 8, we both agreed to walk the mile. Gotta love my running group, always there for each other, training runs and races alike. This made that mile around a 16 minute one for us, which I was fine with after all the racing I had done lately. Then, I heard my name being called from behind. It was Kay and her husband Fred, two other Galloway folks whom I had no idea were running the race. It’s always great seeing familiar faces at races! The four of us then began running together that last mile. Nearing the finish line, I took off. No matter how tired I may be, I can’t resist giving it my all as I cross the finish line.

Upon finishing, I was then “crowned” by a volunteer. Instead of a medal, this race gave out finisher crowns. Talk about a neat new way to celebrate your accomplishment. I love medals, but it’s nice to have something different once in awhile. I mean, how else can you call yourself royalty if you don’t have a crown? 🙂 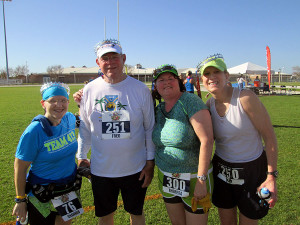 I enjoyed this race, and would love to run it again. My only other issue was that I wish there were more water stops, but this being the first year for Excalibur, I’m sure that will be easily remedied for 2015. If you are close enough to Viera or want to venture down to Florida and run a unique race, the Excalibur 10-miler is one to add to your list.