On Saturday morning, my mom and I took part in the Earth Day 12k and 5k in Clermont. I would running the 12k while she would be walking the 5k. This was our race for Mocha, as we were both doing it in her memory.

After not getting a good night’s rest (thanks to a noisy roommate), we were out the door at 6am to drive to Clermont. The race itself began at 7:30am, but it would take about 40 minutes to get there and we still needed to pick up our race packets. I normally prefer to pick up my race packet before race day, but it wasn’t really possible in this case.

We arrived at the race site at about 6:50am, parked and immediately walked over to pick up our packets. After getting our race numbers and timing chips on, I made the obligatory rest room stop. By then, it was time to get to the starting line. The actual starting line was quite a ways down which was a surprise. But, the quarter of a mile or so walk was a nice warm up for my legs. 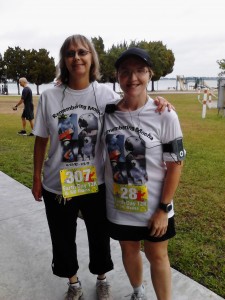 Mom and I post-race

The race was a small one, so when the 12k began, I quickly found myself at the back of the pack. I walked for a minute or so, then hit my Gymboss timer and was off and running. I kept with my 1:1 intervals as that’s what I’ve been comfortable with. Since I will be starting the Galloway training program in June, I have decided to just stick with what works for now. The weather was overcast and pretty nice which was definitely a plus considering the weather forecast had called for rain. I have yet to run in the rain, and I’d prefer to do that for the first time as a training run if possible.

I hit the 5k mark at just under 40 minutes which was great for me. Took my Mocha Cliff Energy Shot at about the 4 mile mark. I was slowing down after the first 3 miles, so I knew I needed the boost. My pace increased in the miles after that and I kept pretty steady overall. By the last mile of the race, my legs were feeling it. They felt a bit weak and like jelly. I was definitely glad to see the finish line!

I finished with a time of 1:35:40 per my Garmin. Official race time was 1:35:45. This gave me an average pace of 12:40. I’m pleased with how I did in this race considering that I’ve been so tired and having trouble keeping energized during my runs lately. I’m glad I was able to run this for Mocha and I know she was up in Heaven watching me run.