My 11th half marathon, and one that I know I won’t soon forget. Cherokee was also my first out of state race from my home state of Florida. Nice to finally get a second state in the mix! I was looking forward to this race, but I admit, I was also a tad nervous. It wasn’t the distance that did it, nope my nerves were due to the new elevation and terrain I would be running on in North Carolina.

The Cherokee Harvest Half Marathon was on October 18th in Cherokee, NC. That’s about an hour away from Asheville where I would be staying with friends. I was driving up for the race and then vacation (a racecation!), so I left on Thursday morning from Orlando with my sights set on the Blue Ridge Mountains. I arrived late that day, and then after a night’s rest, headed out to Cherokee on Friday afternoon to pick up my packet and check out the area a bit.

On Saturday, race morning, I got up a bit after 5am, and got dressed. Temps were in the high 40s, so it was a little chilly for this Florida girl. Still, I wore one of my Skirt Sports gym girl ultra skirts, my blue Skirt Sports Liberty tee, Blue pullover along with black Zensah compression sleeves. Part of me regretted not packing a pair of capris, but I also knew I would survive. It took me a little longer to get to the race site than I had anticipated (note to self: driving in the dark in a place you don’t know too well equals leaving earlier than you think), but I got there with enough time to park, use the bathroom and get lined up at the starting line. 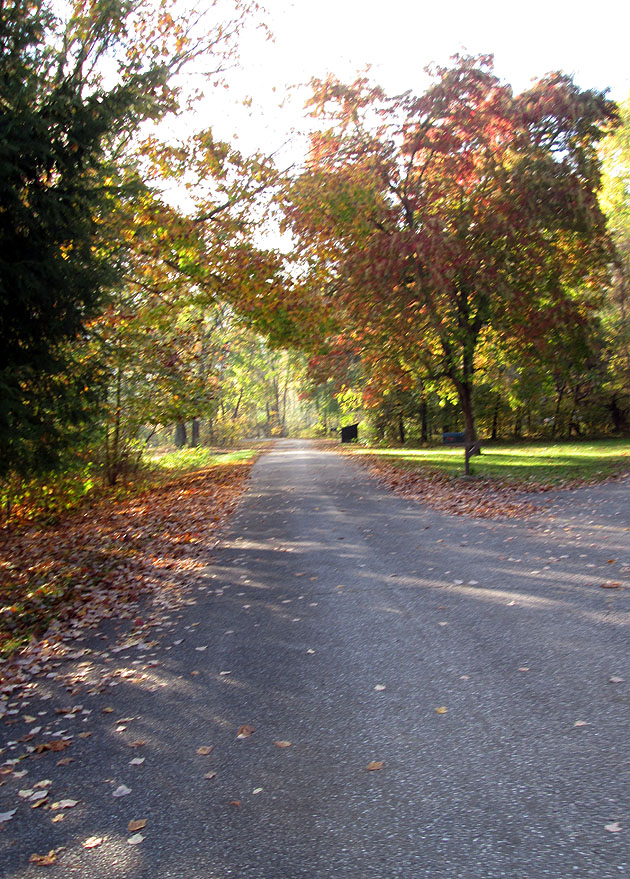 Before the race started, not only did the race officials do the National Anthem, but they also said a prayer which I really liked. Definitely not something I have heard at a Florida race before. Was nice, and I know a number of the other runners appreciated it as well. With that, we were off for our 13.1 mile trek in Cherokee.

Out of the gate, I could already tell that I was either the only Galloway runner, or one of very few. As soon as I took my first walk break, runners were passing me on either side. Of course, that’s not unusual, but I soon learned I was truly at the back of the pack of this race. I was running my own race though, so I quickly let those thoughts leave my mind. I concentrated on my intervals (I was using 30sec run to 45sec walk) and enjoying the scenery around me. I was in North Carolina, near the Smoky Mountains, after all! With the Fall season in full swing, the leaves were turning color, and despite the cold temp of about 50 degrees, it truly was a great morning for a race. 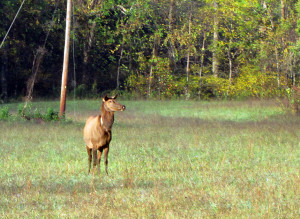 Spotted on the course. So neat.

The race had mentioned to us that we might see wild elk on the route, and they weren’t kidding. Around the hour mark, I spotted a single elk on my left. He or she was beautiful, just standing there in an open field. The park rangers were on site to keep both parties safe (runners and elk alike) as we passed by the animal. There was a bit of a loop through this area before the course routed back to the spot where I had seen the elk. By that time, he/she was gone (rangers explained he/she crossed the road and joined it’s friends out of sight) and part of me was disappointed that I didn’t get to see any others. I was happy that he/she was back with the other elk though, as I’m sure a group of hundreds of runners startled him a bit.

Around the half-way point of the race, I ended up chatting with a fellow runner from the area. She was doing a run/walk, but not an official Galloway method. She told me she was running for about two minutes then walking for a bit before doing another two minutes. We talked about how shorter intervals can be beneficial to your running and energy levels (told her about how Jeff Galloway does 15:15 intervals these days) and explained how I am starting to like the shorter intervals more these days. 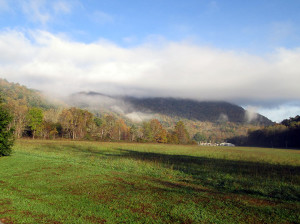 We encountered the crazy hill which was about half a mile long together, in which we both stopped really running and trudged up it walking. Once we came down from the hill, we pretty much went back to our own comfort zones. I put my music back on (took my iPod with me for this race since I was sure I’d be solo), and kept pushing onward. Even with the beautiful scenery and things to look at when we were on some of the main roads, I was beginning to feel it and had thoughts of wishing the finish line were only closer.

This was the point when I used my mantras and mental training to push through. It’s never that my legs can’t continue, it’s that my brain wants me to stop. It tells you that you are tired, that you can’t continue on. Deceptions that you have to fight your way through to continue toward the finish line. Some races and runs require more pushing in this way than others, but all have their moment or moments where you need to remind yourself that you are strong and will get this race done. 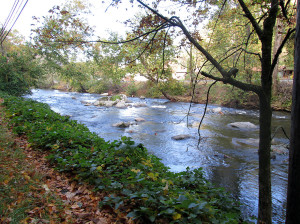 Things were going pretty well after that, I was feeling a bit stronger and looking forward to crossing that finish line. The finish line of my first race in my second state, when it happened. About a quarter of a mile after the mile 10 marker, I went down. Runners were being directed to cross the road and then resume running on the sidewalk on the other side of the street. As soon as I crossed the road and went to get onto the sidewalk, I fell. It’s an odd feeling when you fall running. You are in your groove, in your zone heading toward your goal when boom, things change. It’s a split second occurrence. One minute you’re running, feeling strong and then the next minute, you are face down on pavement. I didn’t black out, but I can only vaguely recall how it happened. I just remember feeling like I was falling and then somehow bracing myself for the impact. Thankfully, my left hand took the brunt of things. I did knock the bottom of my chin on the sidewalk as well as both knees and scraped up my right hand a bit. Less for being freaked out about what had just happened, I was okay. One of the volunteers who was directing us to cross the street had rushed over and helped me up. He gave me a once over and called EMS. After taking some breaths and regaining my composure, I was able to see that I was alright. I hadn’t bitten my tongue or seriously injured my face (chin ended up having a small scrap and then being bruised) which was the best news. That left hand took the fall the worst. I had lost a good deal of skin on my palm near my pinky finger. I was able to move around and less for the scrapes, my legs were fine. Once EMS arrived and cleaned up my hand and covered it for me, I moved onward. I was not about to not finish this race, especially with less than 5k to go before that glorious finish line.

So, I was back off again. Slow going at first, but I hit my gymboss timer and continued with visions of the finish line in my head. Or, maybe that was just my mind trying to figure out what had just happened on that sidewalk which was now behind me. I was not letting a fall get in the way of finishing half marathon #11. I admit, if it was a training run back home, I likely would have stopped at that point and called it a day. But, it wasn’t a training run. It was a race that I had no intention of getting a DNF on.

Those last three miles felt like ten miles. I was now the last runner coming in and being followed by the chase car. Quite an interesting feeling, I have to admit. I’m always a mid-to-back of the packer, but to be the last runner, was something I had never experienced before. It ended up being both nerving and exciting rolled into one. When I rounded the corner and came around the track toward the finish line, the race announcer was cheering and getting what was left of the crowd to welcome the final runner in. Which was me. 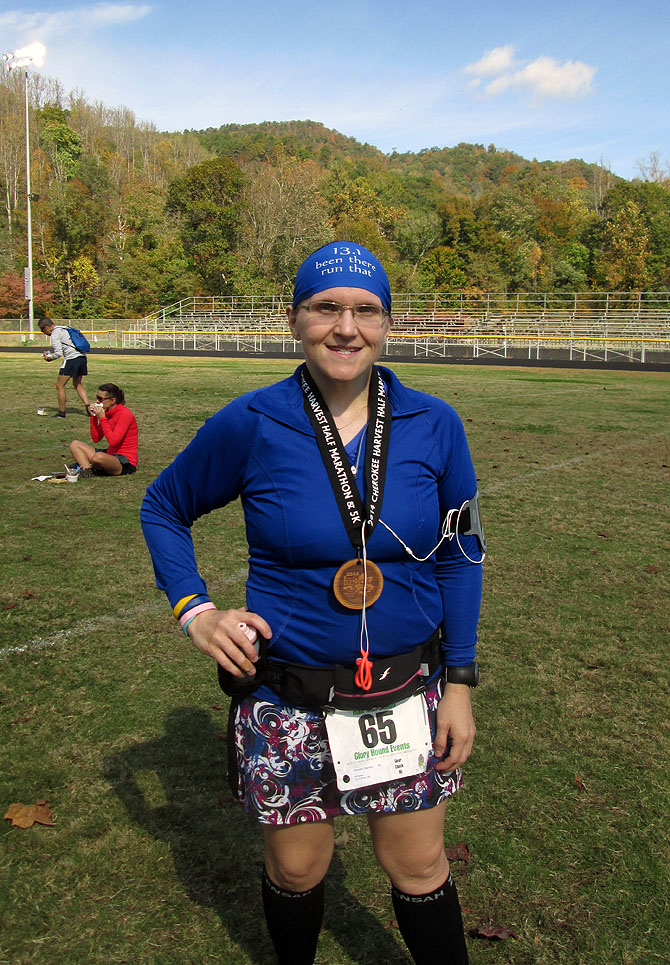 Crossing that finish line, at what ended up being my slowest half marathon time, I still felt like I had won. I had not only gotten back up and finished the race after falling, but I had conquered my first race in the mountains. Sometimes, it’s not about the time on the clock, but it’s about refusing to give up when the going gets tough. Every race has it’s own challenges, some are just more difficult than others.

Would I run the Cherokee Harvest Half Marathon again? You know, I thought about this not only after I finished, but in days following the race. My answer clearly is yes, yes I would. Not only was the course beautiful, but I have to admit, I want to get back out there and show what I am capable of on that course. Maybe not in 2015, but 2016, I’ve got my sights on you. 🙂