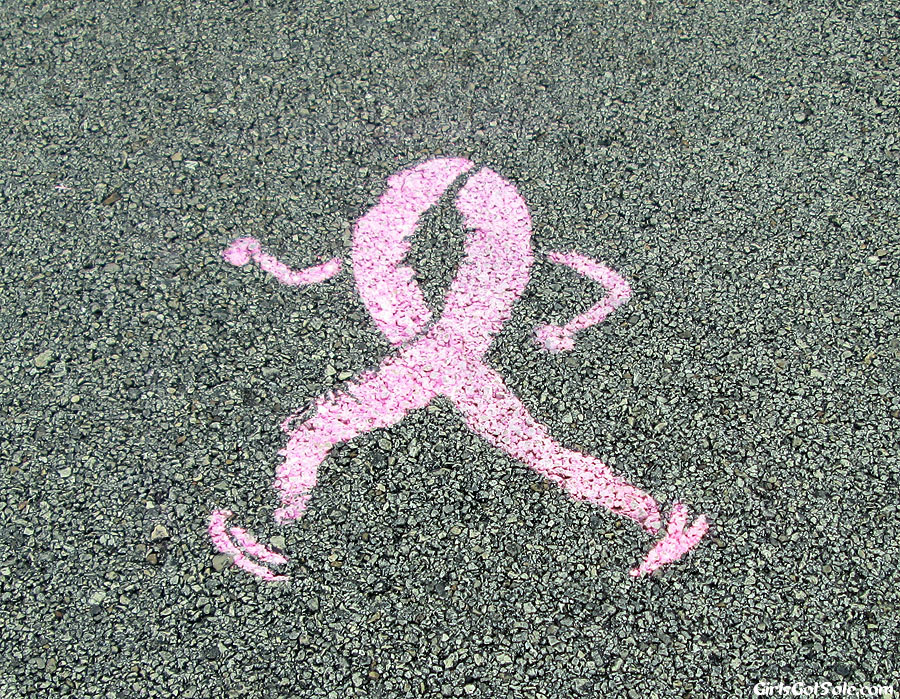 Hard to believe that this time last weekend, I was done running my 2nd DONNA race (my first marathon was the original Donna race for me in 2013) and back in Orlando. It was such an awesome weekend, and while I struggled on the half marathon course, I would definitely go back and do it again in a heartbeat. In fact, I plan on just doing that in 2015!

On Saturday night before the race, I stayed at the Hilton Garden Inn which is just over a mile from the race start. Talk about easy and fast getting to the race site on Sunday morning. I loved being so close, especially considering I stayed about 15 miles or so away last year. This time around, parking was easy, and I had a chance to check out the Runner’s Village area a bit before the race.

This year, they had wave starts to space the runners out a bit. It wasn’t done like runDisney does it, and I liked this way much better. It was just by the color of your bib which represented your pace/anticipated finish time. This way only took an extra couple of minutes or so in between each group, so very simple and easy going. I had lined up near the 2:40 pacer, in the back of my mind just hoping to keep up with them for a few miles. In reality, I knew I would likely be in between that pacer and the 3:00 pacer. My best half time isn’t far below three hours, so while I hope to run 2:40 someday, I knew it was unlikely to happen at Donna. 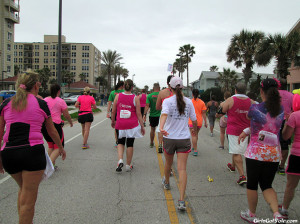 Once I crossed the start line, I got excited. The atmosphere of the 26.2 with Donna is like no other. Seriously, it’s an excitement and motivation that I have yet to feel at any other race. The community comes out in droves for this event and you can feel the love throughout each and every mile. I kept up with the 2:40 pacers for a mile or so and then I began to slow down. At that point, I only hoped to stay ahead of the 3:00 pacers. That was my goal, stay ahead of them.

That goal was great in theory, but it wasn’t long before I realized the 3:00 pacers were right behind me. I had slowed down a good deal from that earlier pace group. After some time I playing leap frog with that pace group, I gave in and joined them. I admit, I was a bit tired and needed the push and motivation. That happened not long after hitting the beach after mile 6. That beach was quite nicer this year! This time around, I really enjoyed the time we ran on the beach since it wasn’t 30 degrees and a cold windy day! 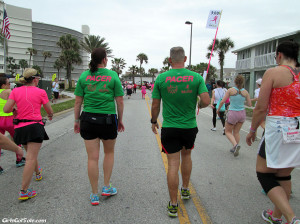 One of the Orlando Galloway group leaders from another pace group was actually one of the race pacers for the three hour group, so that was nice. I ran some of the beginning of the Space Coast Marathon with her back in December. There were about maybe a dozen or so runners with this Galloway pace group.

The community support on the course on the beach and especially after the beach was amazing. People not only come out with awesome signs and noise-makers, but food for the runners. There was cookies, pretzels, donut holes, fresh fruit and even beer. Jacksonville residents are just beyond awesome during this race event. This really does help during the race, especially when you are feeling the need for some motivation. 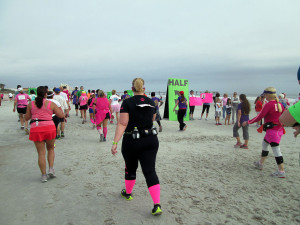 The real inspiration though is the breast cancer survivors and those out on the course running in memory of a loved one who lost their battle. I took in each and every story that I could. When I thought for a moment that I was too tired and wanted to stop, I thought of these amazing folks. They have to fight through chemo and so much, and all I had to do was run 13.1 miles. We are so fortunate to be able to run, and I never forget that.

That bridge, oh the bridge. If you are not familiar with the 26.2 with Donna, there is a pretty big bridge as you approach the final stretch. That on-ramp is especially daunting and I remembered it all too well from last year. I did not let it win though. It’s the only real rough part of the race and you know that once you come over it that that glorious finish line is just about a mile away. And, you have some of the most excited and pumped up cheering spectators on that bridge. The adrenaline started to move through me as I saw those great folks. Their enthusiasm was very appreciated. 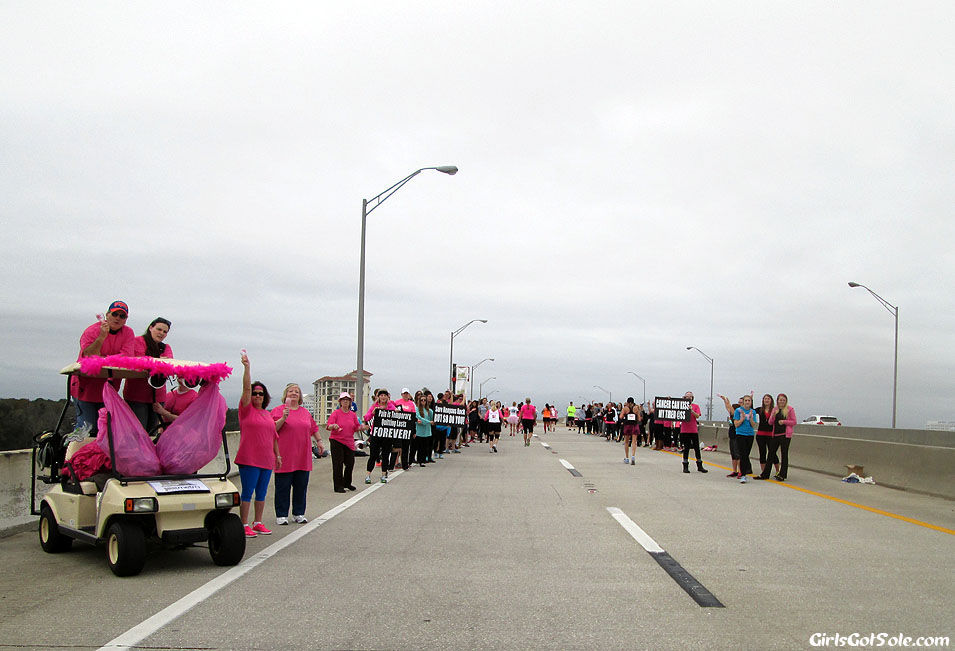 Coming off of the bridge and around a turn, there it was, the finish. That finish line always looks like a bright shining beacon of light to me at the end of a race. This time, it truly was a shining light for me, bringing me “home.” You can’t help but smile and be happy as you enter that finishing chute and cross it. I know I felt so amazing when I did despite being tired. It was almost as if the sore legs and tired feelings left me and I felt fresh again.

Thoughts of my first marathon at that very location at the Donna in 2013 flooded over me throughout this race, especially as I crossed the finish line. While my family wasn’t present this time around, I had a moment where I really wished they were. But, the overwhelming feeling of fellow runners, smiling volunteers and energetic spectators made it feel as though I was getting a hug from them all as that medal was draped over my head and put around my neck. Accomplishment. 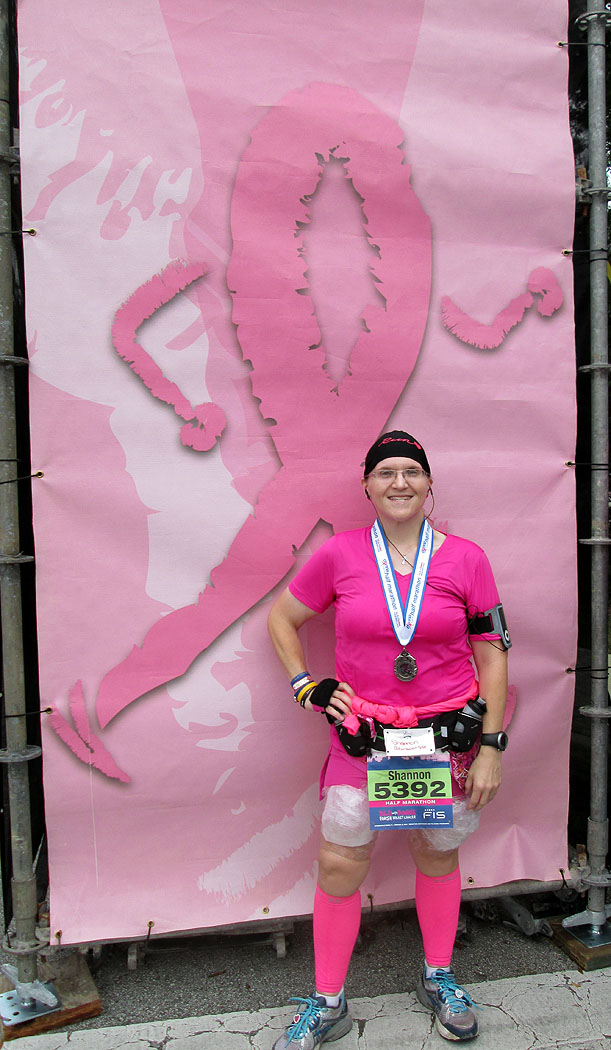 I finished my 9th half marathon at the Donna in 2:57:39 which, while not a new PR for me, it was a good time for me. I felt good and loved the entire race experience. I will most definitely be back in 2015 to runDONNA!