On Sunday, July 12th, I ran the Suck It Up Buttercup 10k for the second year. It was in a different location this year however, having relocated from Deland to DeBary. This meant the route was completely different. I knew that last year’s race was very hilly, so I wasn’t completely sure what to expect with the new location. 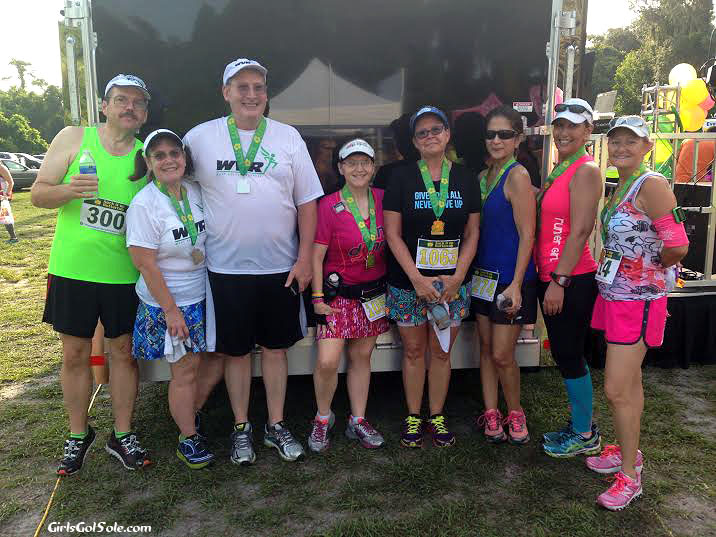 Some of the Orlando Galloway group at the race.

Since the race start was at 6:30am, that meant an early wake up call. Of course, I’m not entirely unfamiliar with those living in Florida and having to run before the sun comes up. It actually was a good thing that it started so early, because that would mean the sun would just be really coming out toward the tail end of the race. My alarm went off at 4:00am, and I got ready and headed out the door. I drove to meet a friend who was also running the race. We met up so that we could carpool to the race location.

We actually arrived to park with almost an hour to spare before the start. It was a bit more time than we needed, but it’s always better to be earlier than not in my opinion. This gave us time for hitting the port-o-let, chatting with friends and just hanging around before things got going. 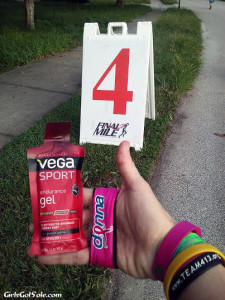 At just after 6:30am, the gun went off and the race began. Since both the 5k and 10k runners started together, the first mile was crowded. It took some work to get any kind of pace going. My friend, Terrie and I were trying to stay together, so the weaving and all did take some extra effort. Once we hit the first mile marker, the 5kers turned off to the right and the road opened up more.

There was lots of support on the course. You didn’t need to carry your own water, it was that well supported. I always carry my own anyway (makes me more comfortable), but after seeing the amount of water stops, I would have been totally fine without it. Speaking of support, the volunteers on course were great. They were very supportive and kept you excited about the race.

The first half of the race went by pretty quickly for me. At the beginning, you get the hilliest portion of the course. Then, it does get flat for awhile. I was feeling a lot hotter and dripping sweat despite the fact that it was pretty overcast out. Florida humidity is pretty brutal, period. 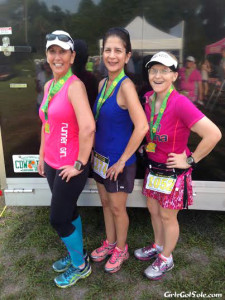 With two of the girls from my pace group after the race.

The last couple of miles include the hills you go over at the beginning since you are returning to the park in which the race began. So, it was a push to get through those. I could feel it in my legs especially. The course definitely gives Florida runners more of a challenge than most of us are used to in this flat state. I finished three minutes and change faster than I did last year at this race. Though, it’s hard to really compare them, since the course isn’t the same.

Despite the hot and sticky weather conditions, I thought it was a good race. Well supported and the finish party had all sorts of stuff including beer, fruit, Clif bars, whoopie pies, donuts and more. Little something for everyone. The DJ was getting a lot of folks to dance as well, so that was fun.

After chatting for awhile with friends and taking some photos, Terrie and I were ready to head off and call it a morning. I will run this race again next year. As long as you keep in mind the humidity and the hills, it’s a good one to do.