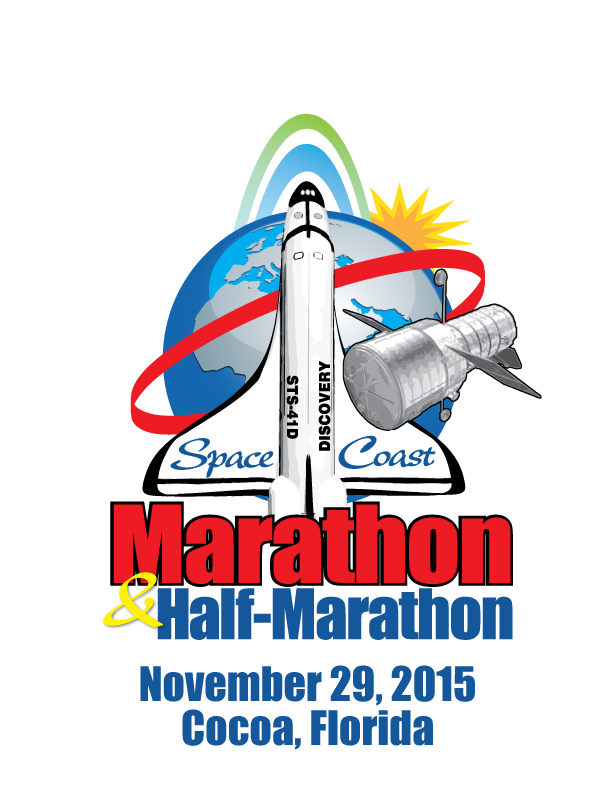 This past Sunday, November 29th, I ran the Space Coast Half Marathon. This was my fourth time running at Space Coast, my third doing the half. It was also the third year of the Big Bang Series Challenge, which meant I would be getting two medals at the finish line this year. If you run three years of the Big Bang Series, you earn the Milky Way Challenge medal. The series began in 2013, and I ran the full marathon that year (you can run any combination of either full/half marathon in order to get the bonus medal). While the first half of the Space Coast Marathon course is great (dare I even say nicer than the half course side), I have opted to stick with the half marathon as of last year at this race.

I headed to the expo with some of my Orlando Galloway running friends on Saturday to get our race packets. The race expo has been held at the Radisson Resort since last year (previously, it was on-site at Kennedy Space Center which proved to be too small, the race outgrew it in 2013), and it’s about 45 minutes from Orlando. The four of us loaded up at one of the girls’ houses and we were off around 10am. The expo itself wasn’t much, it was fairly small and not many vendors. Highlights were Bondi Band, Milestones Sports Jewelry, and My Soxy Feet. Because of this, we didn’t stay long after picking up our race packets. 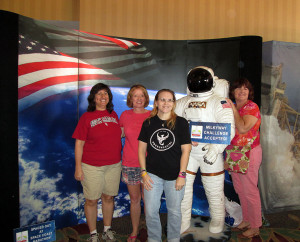 At the race expo on Saturday.

Like last year, I didn’t stay overnight in Cocoa this year before the race. A number of my running group carpooled over on Sunday morning. This meant a way early wake-up call, as in a 2:15am wake up. Thank goodness I’m kind of used to crazy morning wake-up calls due to running during marathon training. We all met up at one of the runner’s houses at 3:45am and piled into two cars to head to Cocoa. Thankfully, parking was found fairly quickly since we arrived a little before 5am. We were pretty close to the runner’s village which would make things easier after the race.

A couple of us immediately got in line for the one actual women’s restroom to take care of business. There were a lot of port-o-lets available, but when there’s a real restroom option, you take it! This of course took a bit longer, but while we waited in line, we chatted with other runners and I saw some friends pass by as they arrived at the village.

Before I knew it, the time had come to head over to the starting area. The half marathon was starting at 6am, while the full marathon at 6:30am. Space Coast begins their races in a pretty neat way. They have a shuttle launch showing on a large screen as well as actual smoke effects accompanying it. Unfortunately, while I can hear the launch and see the smoke, I have never seen the launch on the screens. Not only am I far back in the pack of runners, but I’m a shorty. 🙂 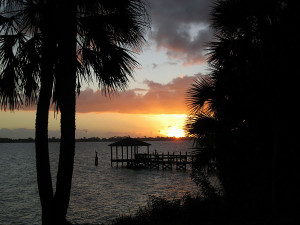 Beautiful sunrise on the half course.

I opted to start with the 3 hour pace group, as she was doing 30:30 intervals which was what I was planning on doing anyway. My hope was to stay around the 3 hour time, then speed up the last 2-3 miles in hopes of getting under that and a new PR. The first couple of miles were quite crowded which is typical for this course I’ve learned. My goal was to just stick with that pacer. She was great, keeping the proper interval and putting her hand up with each change of interval from run to walk and run again. By the time we hit the 5k mark, I was hot! The weather was not the best for a race. We had 64 degrees at the start, with 94% humidity. If the humidity wasn’t so high, it would have been better for sure.

I stuck with the pace group until somewhere around mile 4 1/2 when I met up with some runner friends. They too hung with the pace group for a bit, but by the time we hit the turn-around at the halfway point, we began to pull ahead of the group. I was glad to see the familiar faces who also helped challenge me to pick up my pace for the last miles. I hadn’t seen or run with these ladies for months (more for one of them who had moved down to Miami), so it was a pick-me-up to run with them.

As of mile 8, my pace sped up and I know it’s the fact we challenged one another during those run intervals that helped. Yes, it was incredibly warm, but I was going to push myself to that finish line. It was during those final miles that I saw many of my Orlando running friends. Space Coast is always a great race for seeing familiar faces. It truly is like a local running community gathering.

I was feeling pretty good, a bit tired, but good as I made it into the last 5k of the race. This is truly the point in the race where I tell myself, just 5k to go, then just two miles to go…it’s a motivator for me mentally. If I find myself struggling, I remind myself that I run 3 miles every Tuesday and Thursday morning (sometimes 4 miles even), and that was all that was left. In this case, my quads and butt muscles were not pleased or impressed with me. Not once did I feel like giving up or even walking more. I did 30:30 run/walk/run intervals through the entire race.

Coming into the final finishing shoot (well, it’s a finishing shoot for this race anyway), I began to enter a final sprint. That’s not the best plan though, at least not so early into it. That finish winds around quite a ways, and despite having run it three times before, my brain seems to always forget about this fact. Maybe I’ll remember in 2016? Ha, we shall see. 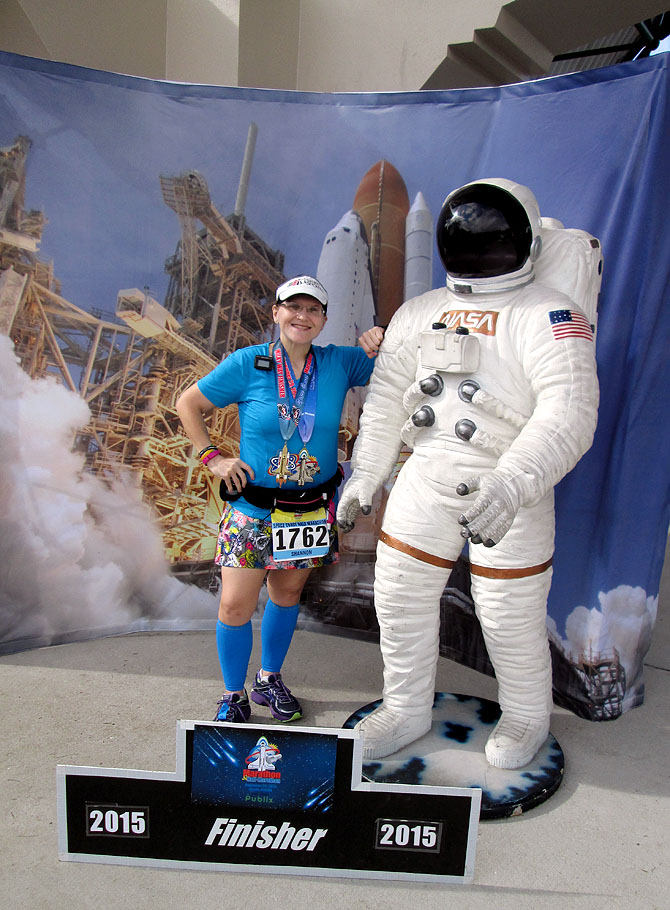 I crossed the finish line in 2:54:13. This is a 35 second PR for me, first half marathon PR in about a year and a half. It was nice to see that time, especially being able to do it after running the NYC Marathon 28 days prior. Besides getting a new half marathon PR, I got my two medals. The Discovery shuttle medal for this year’s race, and the Milky Way Challenge medal for doing three years of the Big Bang Series. I admit, I was excited about that bling! You also get a finisher beach towel after each Space Coast race.

After some needed post-race hydrating, I found a few friends and we exchanged hugs, brief chats and pictures. I unfortunately did miss a few folks I wanted to see, but things can get just a little crazy after a race making seeing everyone difficult sometimes. I did finally meet a Skirt Sports Ambassador sister, Karla which was great. In fact, I saw her and her friend on the course during the last couple of miles. 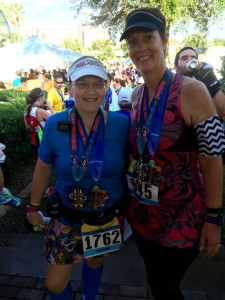 Since there were some Orlando Galloway friends running the full marathon, four of us stayed and spectated for awhile. It was fun cheering on the marathon runners and just hanging out. It was a nice way to close out the 2015 Space Coast Marathon weekend.

I’m definitely looking forward to the next couple of years of the Space Coast Half Marathon. Three years down, two to go! Once I finish the 5th year, I’ll earn the Intergalactic Finisher medal. 2016 is the Endeavor shuttle, then 2017 is shuttle Atlantis. Plan is to collect all of the Big Bang Series medals. 🙂