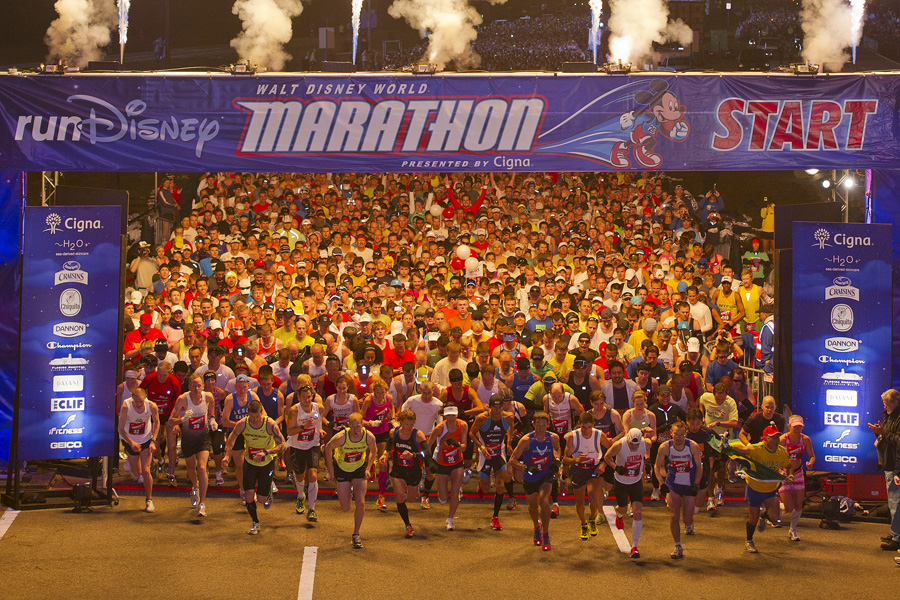 As I sit here the day after my 3rd marathon in just less than a year’s time, I’m amazed at what can be accomplished when you challenge yourself. I stepped out of my comfort zone for my first marathon in February 2013, and now I’ve repeated that same 26.2 distance two more times. I would have never thought that I would do a marathon, let alone go back for more of them. The opportunity to run the WDW Marathon this past weekend came a week before the event and I wasn’t sure I was up for doing the marathon distance again so soon after Space Coast, but I said yes, and I don’t regret it for a second.

On Saturday, my Disney weekend began. I spend the night at my parents house in Kissimmee on Friday night, so I was able to leave their place around 8:15am on Saturday and head down Osceola Parkway to Wide World of Sports. After a quick stop for coffee, I was ready to check-in for my shift working with Bondi Band at the expo. I was looking forward to the experience not only working at the expo, but sharing my love for Bondi Band as I’m now a Blogger Ambassador for them. I worked for about four hours, as it wasn’t too busy and had a good time talking to people about how great the headbands were. Then, I spent some time walking around the expo before heading to the hotel. I would be spending the night on property with some of my Galloway group friends which would make it a lot easier to get up for the marathon the next morning. After going out for dinner with my running friends, I showered and got everything ready for the race. Then, it was time for bed!

It was a very early wake-up call at 2:30am. Not exactly a time that I would get up if I had the choice, but when you run at Disney, it’s dark and early! Got dressed for the race, and then put everything in my car before heading to the shuttle bus that would take us to the race start. During Disney Marathon weekend, there are lots of runners and volunteers up at these way too early hours!

Once we arrived at the race starting area, we had to go through security. This is a new procedure put in place since the Boston Marathon. That went pretty smoothly and before I knew it, we were on our way over to the Galloway race retreat. This is a perk offered for those in the Jeff Galloway training programs, and since I didn’t get a chance to enjoy it when I ran the WDW Half Marathon last year, I was glad to be able to experience it this time around. The retreat has some tables and chairs, a couple of port-o-lets, as well as hot coffee/cocoa and some cold drinks that you can enjoy pre-race. Also, Jeff Galloway was inside greeting everyone and wishing everyone a good race. 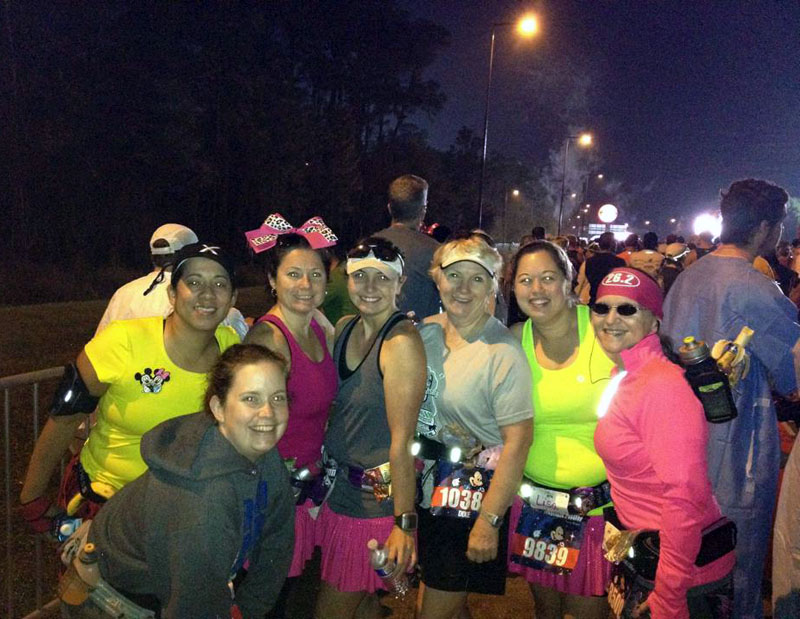 With the girls before the race.

Soon, it was time to get moving toward the corrals. I had a bag to bring to gear check, so I did that and then met the girls en-route to the corrals. It’s about a quarter of a mile of a walk, so on the way, I made a port-o-let stop and then found my way over to the girls who had gone ahead to the corral. We had almost a hour until our corral got to the start line, so we had some time to chat and watch the fireworks go off for the release of the ones in front of us. When we finally got up to the starting line, we were off! We opted to run for 30 seconds and walk for 60 seconds for the race. I had done 30 second runs to 45 second walks at Space Coast, but for this race, I was up for anything that would allow me to get to the finish and enjoy the course.

The race begins in the parking lot of EPCOT Center and heads down the road on World Drive and toward the first park, Magic Kingdom. Runners get to enter through the parking booths and then we go inside and onto Main Street USA. The course goes through Tomorrowland, Adventureland and beautiful Cinderella Castle. After leaving Magic Kingdom, you head toward the Disney Speedway. We ran all around the speedway track and while it was fun, it was also long! They did have some neat race cars and Corvettes out there to look at. I wish I could have seen them better, but the sun was really starting to get bright at that point. Once we left the Speedway, it’s a long stretch on the roads before you hit Western Way and then Animal Kingdom. 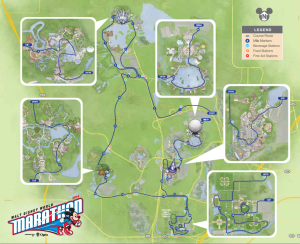 As we entered a back way into Animal Kingdom, we were greeted by some birds of prey and some other animals from the park. Since I haven’t been to Animal Kingdom very much, I enjoyed this part of the race. This was the park that all 7 of us in my group made a pit stop. It was nice to be able to use an actual restroom in the park rather than a port-o-let. Once you go through Animal Kingdom, next up is ESPN’s Wide World of Sports. This was a very long part of the race. Runners spend about four miles inside of the complex before you head back out onto Osceola Parkway.

From the Parkway, runners get onto World Drive leading toward the Studios. Disney’s Hollywood Studios was also a highlight for me. While by this time, it was about mile 23, I kind of enjoyed the short trip through. As a movie lover, the Studios are always a fun time for me. I love the back lots and all that jazz. After the Studios, you head toward the Boardwalk/Beach Club resorts. You’re running through there for about a mile until you make it to the final park, EPCOT! Yes, back to where you started. Well, sort of. Runners get to run through EPCOT and by lots of park visitors and spectators cheering you on to that finish line which is oh so close now! I know I could almost taste it by the time I was inside of EPCOT Center. While I was running in the park, it brought back memories of the Meet-up I was fortunate enough to attend back during Wine & Dine. I had a blast running that evening around EPCOT and while I was certainly more tired and sore this time, it made me smile.

Coming out of the park, you round the corner and see lot more spectators. I think that it’s amazing the support especially during those last couple of miles when you might need a bit of a last push. Then, there it was, the glorious finish line! I can’t tell you how beautiful that always looks to me. It is such good feeling to see that finish that it’s hard not to smile. Crossing the finish line of my third marathon felt amazing. I loved it. I will never tire of the feeling of ten million emotions coming over me as I finish a race. Getting my medal, I was happy and proud that I did it again. I got through this race and I thank God for every day that I can run. I thank Him for each day that I can do this thing that I love so incredibly much. 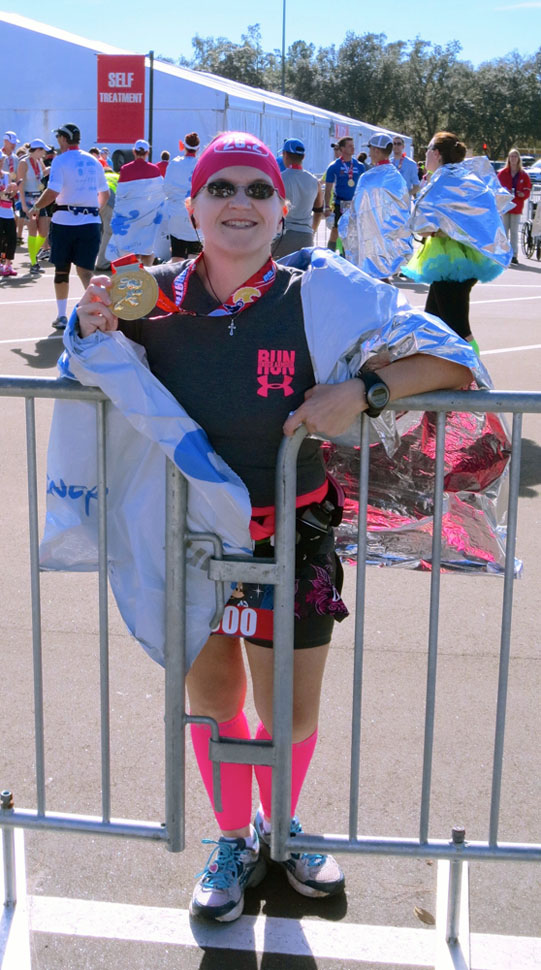 I loved running this race with a group of my Dream Chaser girls. Running with my friends is always a rewarding experience and I love them like family.