On Saturday, I ran in Track Shack’s Celebration of Running 5k. The race was starting just a mile from my place, so I was looking forward to doing a race so close to home. The other great perk was that there was a medal. Bling for a 5k, what could be better? 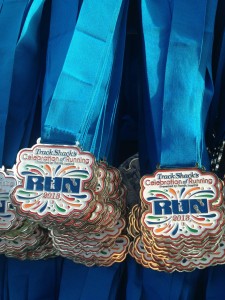 At 6:30am, two of my fellow Dream Chasers (my Galloway running group) girls met me at my house and we headed down to the race. I quickly realized during that short warm-up run to the start that it was humid as heck outside. Within minutes I was sweaty and sticky. I didn’t have much to complain about though, as the two other girls had just come from running 8 miles, so this was nothing. 🙂

Lining up at the starting area, I met up with some of the other girls in my running group. As I waited for the horn signaling the start of the race, I began to consider my plan for the next 3.1 miles. While I didn’t plan on going for a PR, I decided that I would still push myself as much as possible. Let’s see what I can do in this nasty heat, I thought to myself. A couple of the girls from my group ended up deciding to follow me since I had a Gymboss beeper.

On the course, I felt pretty good overall. Good enough to sprint off on my runs a few times. This drove the girls with me to push up their pace. They were kind of surprised that I was going so fast. I knew I was moving along, but definitely not as fast as I was for Run for the Trees which is my 5k PR race. I wanted to at least do the race in under 40 minutes if nothing else.

I was feeling the heat and huffing pretty darn hard by the time I crossed that finish line. Hearing my name being called as I did that though, I felt awesome. There’s nothing like the feeling of crossing the finish line AND hearing your name being announced. It felt so good. As I got my water and medal, I turned to find my fellow runner friends behind me, they were finishing not far behind which was nice to see. I had pushed them to move, but they did so great. 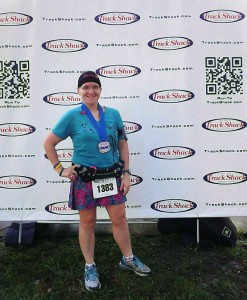 I definitely want to do more 5ks, it’s a short distance, but I still want to continue to better my time in that distance. I would love to one day do a 5k race in 30 minutes.