I had hoped to have this up earlier in the week, but it just didn’t happen. Better later than never! 🙂 That said, it was an awesome race overall. Especially since I PR’ed! I did this race in 2:57:34 Two minutes faster than I ran the Orange Blossom Half back in March. Even a small improvement is so nice. 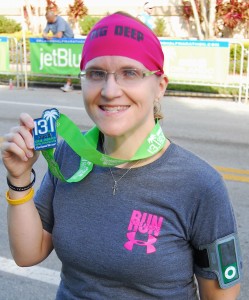 With my shiny new bling! 🙂

Race morning, I woke up and got dressed. I wore my grey/pink Skirt Sports skirt, grey Under Armour top, pink pullover as well as my pink calf sleeves. I had debated wearing capris, but ended up being very thankful I choose the skirt as it got pretty warm during the race.

Once I got to the race site, I did a restroom stop and looked for my fellow Galloway group members. I started off the race with four others from my Dream Chasers training group. We made sure to keep back a bit in the pack of runners, but before the walkers to ensure that we were able to start things off nice and easy. We set our gymbosses and watches for a 1:1 interval. 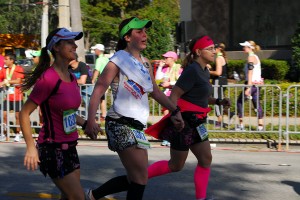 Running with Kerrie and Jennifer from Sole Mates

It was great running with friends from my Galloway group and also seeing so many familiar faces during the race. I was feeling pretty good and strong. By the halfway point, I noticed I was a little sore, but nothing more than how I usually feel during a long run.

By mile 8, I ended up slowing down a slight bit and joined up with two other Galloway runners from another group, Sole Mates. Normally, these gals run faster than I do, but they were running at my pacing with 1:1 intervals. It was nice to run with two people I never run with. Both are great gals with a lot of running experience. 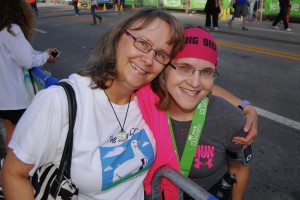 Mom and I after the race.

The last couple of miles were a little rough with the bricks and some hills (yes, Florida has smallish hills), which caused some discomfort in my legs/feet, but I pushed through. Thankfully, before I knew it, the finish line was in sight. I crossed it hand in hand with Kerrie and Jennifer from Sole Mates. The best part besides running with great folks was that I PR’ed! I finished strong and with a smile on my face. And, both of my parents were at the finish to see me complete half marathon #4. That made the day even more special. 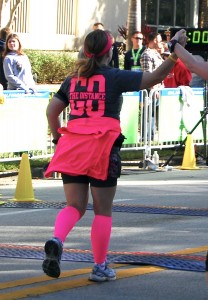