Disclaimer: I received an entry to the 2018 First Watch Sarasota Half Marathon to review as part of being a BibRave Pro. Learn more about becoming a BibRave Pro (ambassador), and check out BibRave.com to review find and write race reviews!

On March 18th, I ran in the 2018 First Watch Sarasota Half Marathon. This was actually my second time participating in this race, as I ran it back in 2013. I don’t recall much from that year, as it was one of my early half marathons. I did go out there and run it with some of my Orlando Galloway group.

This year’s race experience was different. I felt very prepared going into race week, as I had done a long 13 mile training run a couple of weeks prior. Unfortunately, my grandmother passed away the Saturday morning the weekend before the race. I ended up attending the wake on Friday night, then the funeral the day before the race. This put me in a completely different state of mind. Not to mention the long drive from Orlando to Sarasota (which took an hour longer than it should have due to horrible traffic). 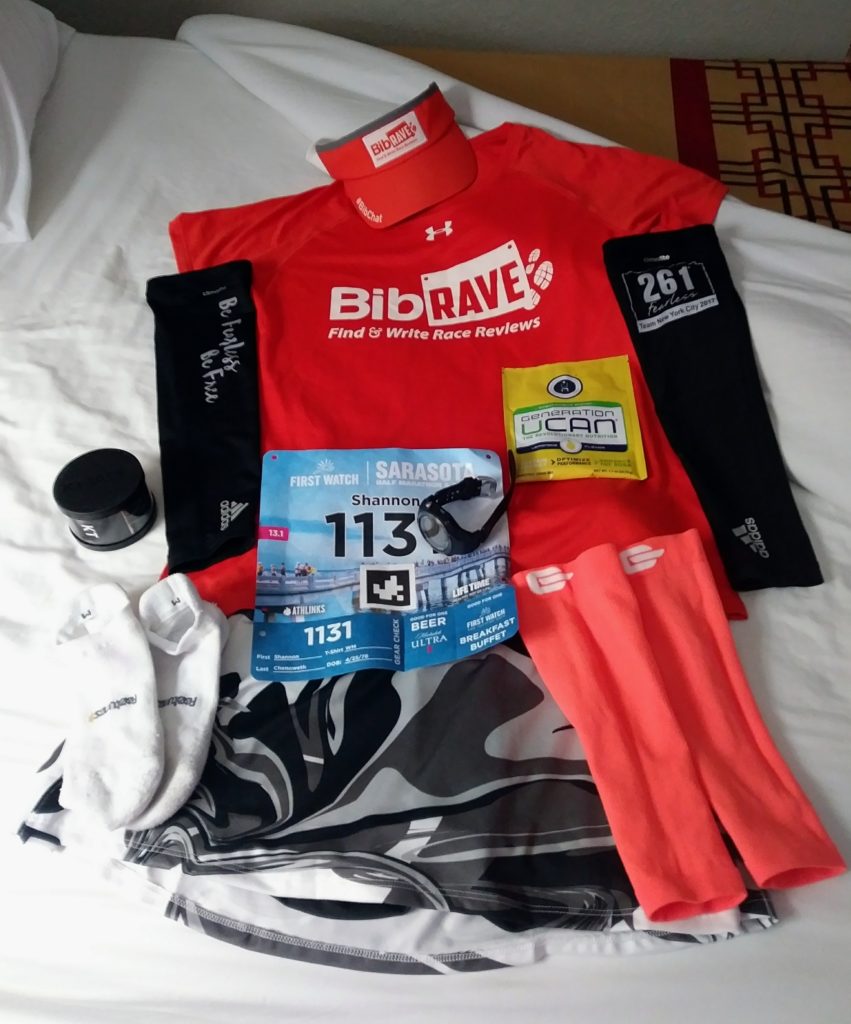 Flat runner for the race

I headed out to Sarasota with an Orlando Galloway friend that Saturday afternoon. We called the running store, Fit2Run during the drive over, and were extremely thankful that they agreed to hold our race packets beyond the 5pm pickup time. While we could have done race morning pickup, being able to get them the evening before made a big difference. It was very helpful and relieved some stress off of me.

After easily getting our race packets, dinner and checking into the hotel, my friend and I were finally able to relax. It had been a long day for me, and having a friend there with me meant a lot. We shared some laughs as we ate dinner and watched TV. Once we set up our flat runners and all for the next morning, off to bed we went.

While I wouldn’t again stay at the hotel we booked, it was conveniently located less than 15 minutes from the race start. Once we were ready to go, the only snag during race morning was a traffic backup when it came to parking. I’m not sure why it took so long to park, but it can and does happen on race morning. It wasn’t my first, nor while it be my last having to wait in a traffic backup to park. 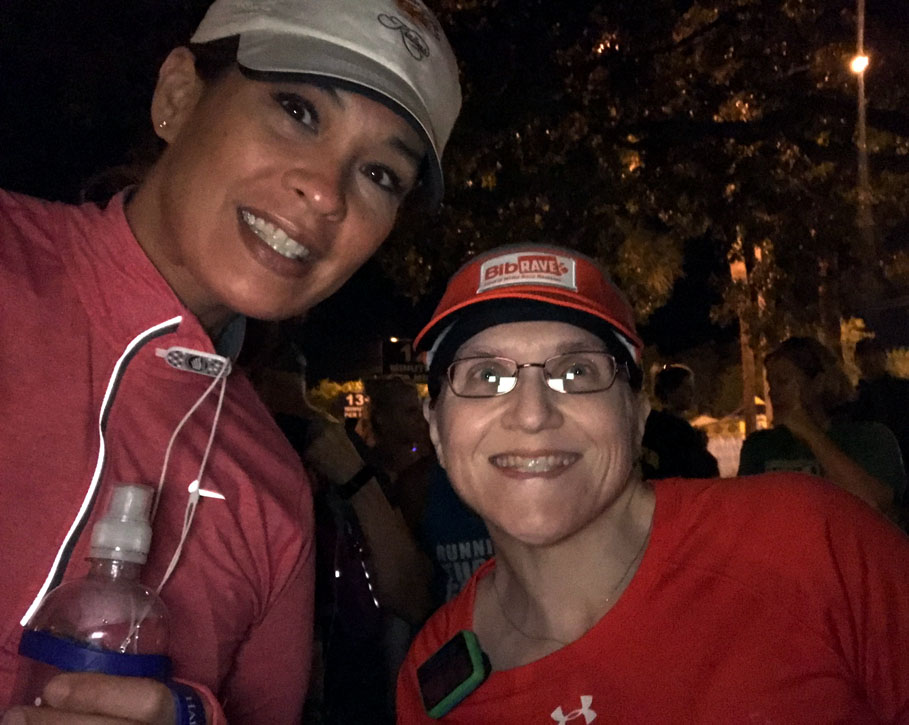 Once parked, I was able to use the port-o-lets and walk over to the race corrals with a few minutes to spare. I felt okay, and fairly energized after drinking my Generation UCAN during the wait to park. My friend and I discussed starting together, as we are in the same pace group, but once we crossed that start line, I lost her in the crowd within minutes. No matter, I planned for that to happen since I knew she would be chasing a PR. I rarely wear headphones when I run anymore, but I did bring my ipod nano and headphones this time. I put on some music and got moving.

It didn’t take long for me to have an issue however. The sock on my left foot felt as though it was bunching up in the heel of my shoe. What the heck was going on? I ended up stopping and trying to fix it, realizing that running for 13 miles like that wouldn’t happen. It took me stopping briefly like 3-4 times before I got it in a position that I could tolerate. Having never, or not that I can recall having trouble with a sock like that during a run, I could not fathom what happened. All I knew was, it was annoying and I disliked my sock during that time period.

After the sock fiasco, I began to feel as though I had lost steam somehow, and was moving at a snail’s pace. My mind played games with me causing me to wonder if I’d be finishing last or almost last. This bugged me, and I questioned myself. I’m nowhere near a fast runner, but I was feeling as though my pace was worse than what it should have been. 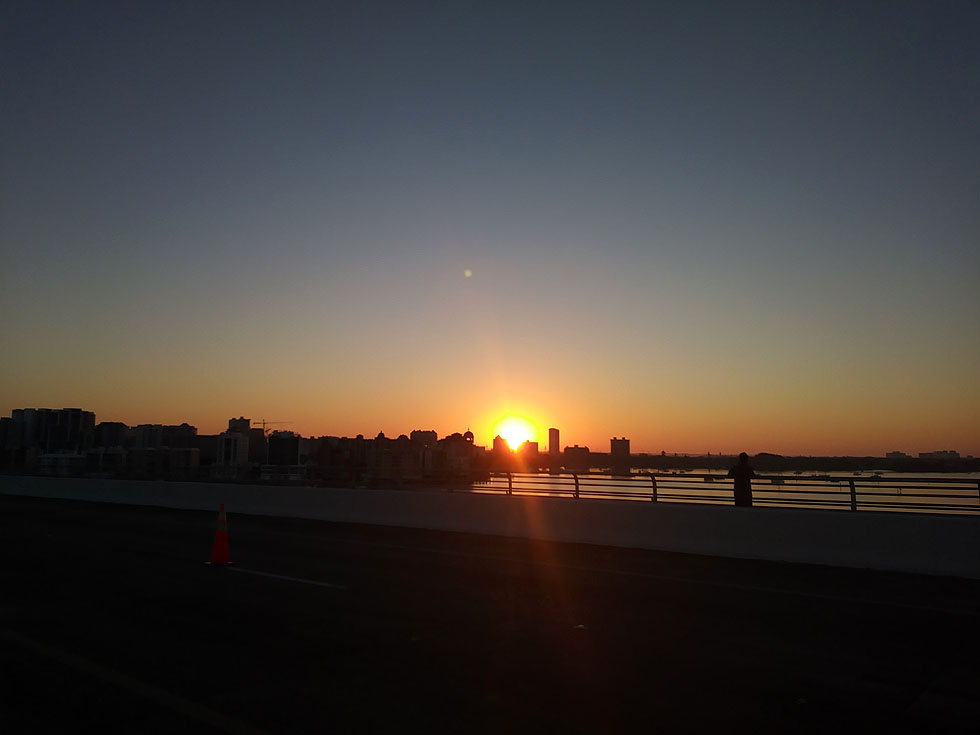 I also became emotional a few times, and had to stop myself from crying. Thoughts of my Nana being gone kept crossing my mind as I ran. Constantly, I had to remind myself that she was in a happier place, that she was up in heaven. There was definitely a regular mental and emotional battle within myself the entire race.

What was a memorable moment for me was coming back over the bridge, the John Ringling Causeway as the sun was coming up. It was between miles 3-5, and there is nothing like the beauty of a sunrise. I feel like it’s always a highlight and gift for getting up so early as a runner. I love it.

Other highlights for me were seeing my two other fellow BibRavePros on course. Both are faster than me, so I was able to see one of them twice, and our fastie, once during the out-and-back portion. Getting those high-fives gave me motivation and helped me push through. I love seeing runner friends when a race is an out-and-back event. I think those are really my favorite. 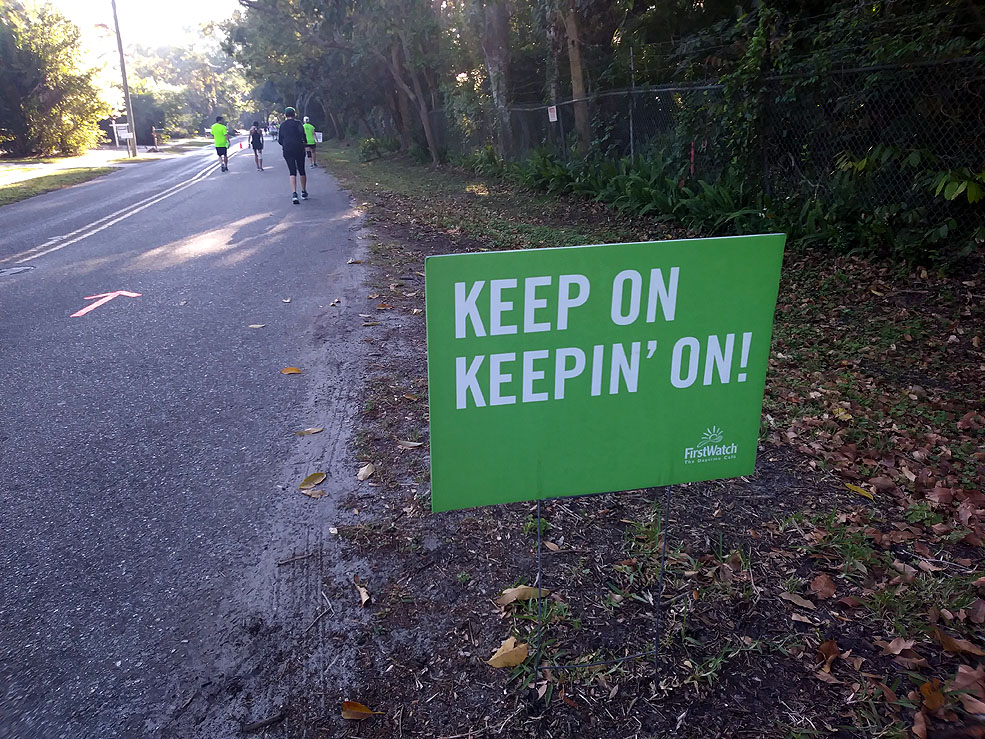 There were also some fun motivational signs during the last half of the race. Some were food-related (after all, First Watch is the sponsor), and others were just great running sayings. I’m a sucker for great motivational signs on a race course. If nothing else, they can put a bit of a smile on your face.

Finishing this race, I was proud of myself. Not all races are going to be a PR, or one that you were able to perform your best. I finished in 3:09, and I felt good about that time. The race was an emotional and mentally challenging one, so the finish line signified a success. And, it was a better time than I thought I would be doing. 🙂 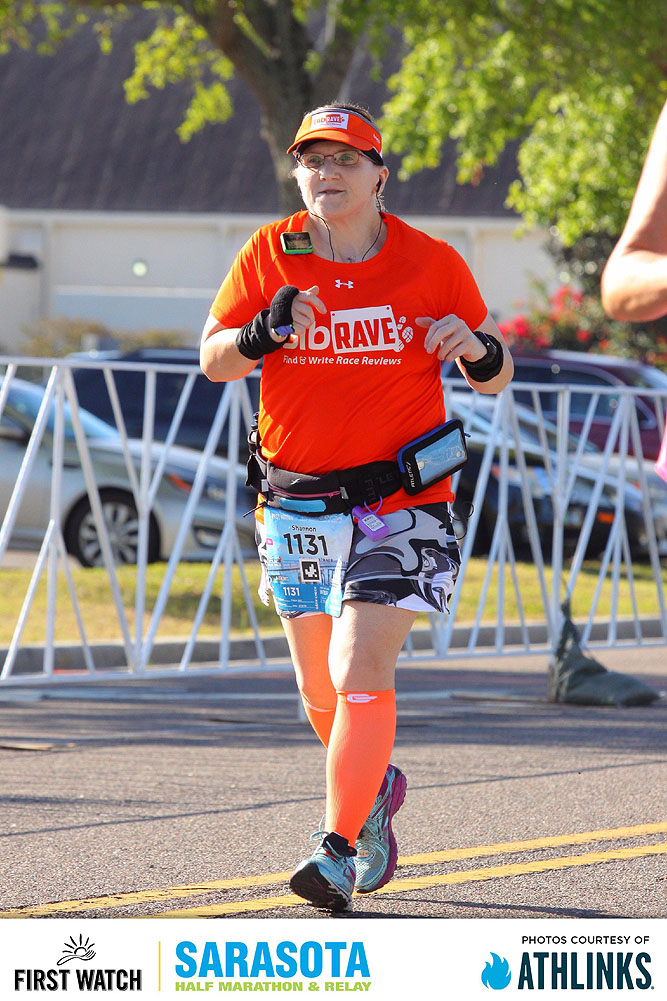 The First Watch Sarasota Half Marathon requires that participates maintain an 18 minute mile pace. The course was open for 3 hours and 30 minutes. This makes it a great race for a variety of paces. The support was still out there when I passed through each mile marker, so that was awesome.

The post-race finish festival was in full swing when I arrived. There was a great variety of snacks and food for everyone. There looked to be plenty for everyone. The Beer Garden was definitely popular. Personally, I’m not a drinker, but for those who appreciate a beer after a race, they have it covered. 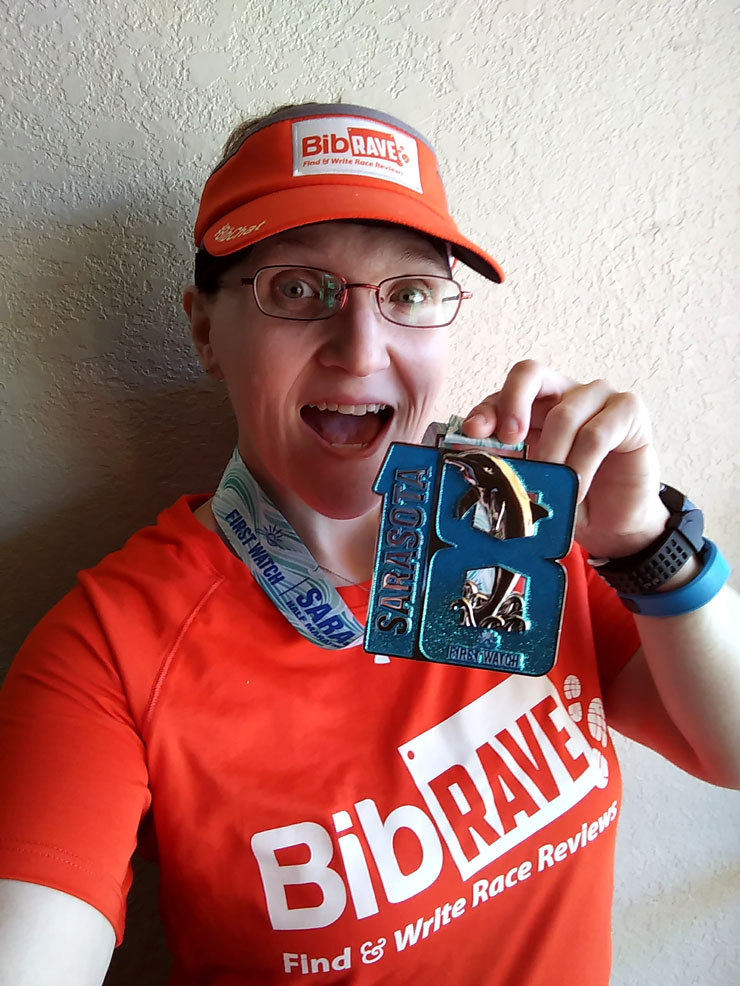 I really did enjoy the First Watch Sarasota Half Marathon. The water support stations and volunteers on course were amazing. Always smiling and ready to go with water. The route is fairly flat, so it’s not hilly (less for the bridge). Beautiful course, especially that bridge with the sunrise coming up as you come back over. Would run it again for sure.