Those who have read my blog for some time now know how much I love the 26.2 with Donna. It was my first marathon (see my race recap for the 2013 race here), and from that moment on, I was attached to this race. Of course, I went into that in the last blog post, so I’ll assume you read that post (if not, check it out! 🙂 ).

The 2015 DONNA marathon was marathon #4 for this runner girl. If I was going to repeat a 26.2 distance, the DONNA was definitely the one at the top of my short list. Race day began early, with myself and my two room-mates, fellow DONNA Ambassador Holly and her friend Peggi waking up to the sound of our alarms. After checking that the weather was pretty much as it was predicted the evening prior, we all got dressed and grabbed whatever we needed and headed out of the hotel room. For me, it was a bit chilly out to start off the morning. It was about 40 degrees, which was a bit better than it was expected to be in the days leading up to the race (feel like temps were predicted to be in the low 30s). Once we piled into Peggi’s car, we drove down the road to pick up fellow DONNA Ambassador Elizabeth at her hotel. With the four of us seat-belted in, we were off to the race start! 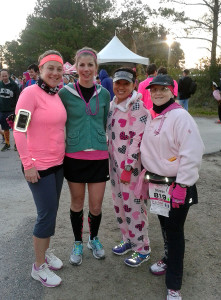 Before the race with some of my fellow Ambassadors.

Traffic wasn’t too bad all things considered. It got a bit slow when we neared the parking, but I thought that was pretty good considering how things could have been. Once we were parked, we had just about an hour until the race gun was going to go off. Always nice to get to a race earlier whenever possible. Time was spent using the port-o-lets, finding the Galloway training tent and chatting with other runners. I finally caught up to some of my Orlando girls at the Galloway tent before we headed off to our starting corrals. I say corrals, but really they were waves. There were I think five waves set off a few minutes between one another to allow some room between groups on the roads. This went smoothly from what I could tell. It didn’t seem too long before my wave with my pace group was heading through that starting line.

I started off the race with the 6:30 pace group which included a lot of great fellow Galloway runners. Our pacers were Will and Carla. Will told us he had run 74 marathons prior to this race. Talk about awesome! He also had some great, funny stories he told us along the way. Two of my Orlando girls were with me in that pace group, Connie and Helen. It was their first marathon and I was excited for them. They had done the 25+ mile training run with me three weeks before the DONNA and I knew they were ready to tackle the 26.2 distance. 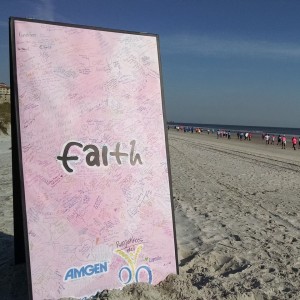 On the beach. (pic courtesy of Amy Collins)

The marathon and half marathon at the 26.2 with Donna all start off together. Everyone in both distances are together until the turn off for the half marathoners at the beach. That is about 6 1/2 miles into the race. Having experiences both the full and half marathons at DONNA, I think both distances are great. Each has their own highlights in a way. The half experiences a good deal of the beauty of the beach neighborhoods, but the full course really gives you everything there is to love about Jacksonville. You get so much more of the curb parties with the full course. I can’t imagine doing the 26.2 with any other course. Especially the beach portion, it’s hard-packed sand for the most part and it is truly a gorgeous sight to be seen. In 2013, I didn’t get to fully appreciate that due to the intense windy weather, but this year I really took it in as I continued on the beach.

After leaving the beach approximately 8 1/2 miles in, the full marathon hits the road once again. This is where some of the best and most fun curb crews are found. These beach neighborhoods have their streets decked out in pink and are out in force in support of the event and the runners. It’s a sight like no other race out there. I was still with the pace group until the 15th mile or thereabouts. I had some stomach issues that required a stop which caused me to lose the others. After a bit though, I began to feel better and continued onward toward that finish line. 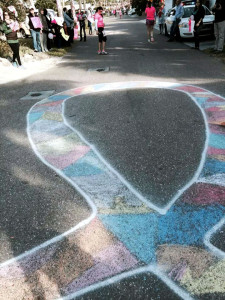 On course, so much neat chalk art and inspirations! (pic courtesy of Mercedes Smith)

The neighborhoods and runners around me helped as I made my way running solo. I didn’t bring my iPod this time, so it was a different experience. I tend to prefer to run with a group or at least one other person for the most part. When I do find myself running alone, my music becomes my running partner. Having made the decision to leave the iPod behind in the car, I found myself praying a lot, talking to God and thinking a good deal about the survivors. I was out there for people like Michele, the woman who had spoken to us the evening before at the Mayo Clinic dinner. It wasn’t about me…sure, it’s a mental game when you are running a marathon, a debate inside of your brain with yourself…but, that wasn’t why I run the 26.2 with Donna. I run it for the survivors. I run it to finish breast cancer, to find that cure to kick the disease out the door once and for all.

Before I knew it, I was making my way toward the on-ramp to the infamous bridge. On the side of the road approaching the bridge, cars were honking and waving excitedly at me and the other runners on the road. It is such a great feeling. We have our own cheer squad at every turn! As I was beginning to go up the ramp, I came across one of my fellow Orlando girls, Helen who was walking. I stopped running for a bit to talk to her and find out if she was doing alright. She felt pretty good, just tired and felt like walking the remaining miles into the finish. I was tired at this point as well, but I did my best to try to encourage my fellow group member to run a few intervals with me. It didn’t work, but hey I tried! I have found the last miles of the marathon are when I feel like encouraging folks around me to keep going. She was still moving forward, so after ensuring she was good, I took off and continued my run/walk/run. 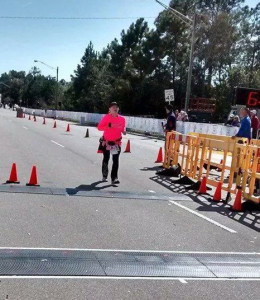 Coming off of the bridge, I knew the finish line was SOOOO close. Coming onto the main road to the Mayo Clinic, it is oh so close! Hitting the 26 mile marker, I took a deep breath and ran the rest of the way into that finish line. IT FELT SO GREAT! That finish line, the finish line at the 26.2 with Donna is extremely special to me. Just over two years earlier, I was crossing that finish line of my first-ever marathon. On February 15, 2015, I crossed that finish mat for my 4th full marathon. Despite how much of a push that day was for me, every single moment was worth it. No matter that I was sore and ready to get off of my feet, nothing could wipe the smile and sense of greatness I felt.

Running a marathon is always a big accomplishment, but running a marathon for a cause that you believe in is so much more. You just can’t put a label or price on that experience or feeling. I’m already thinking about the 2016 26.2 with Donna. 🙂 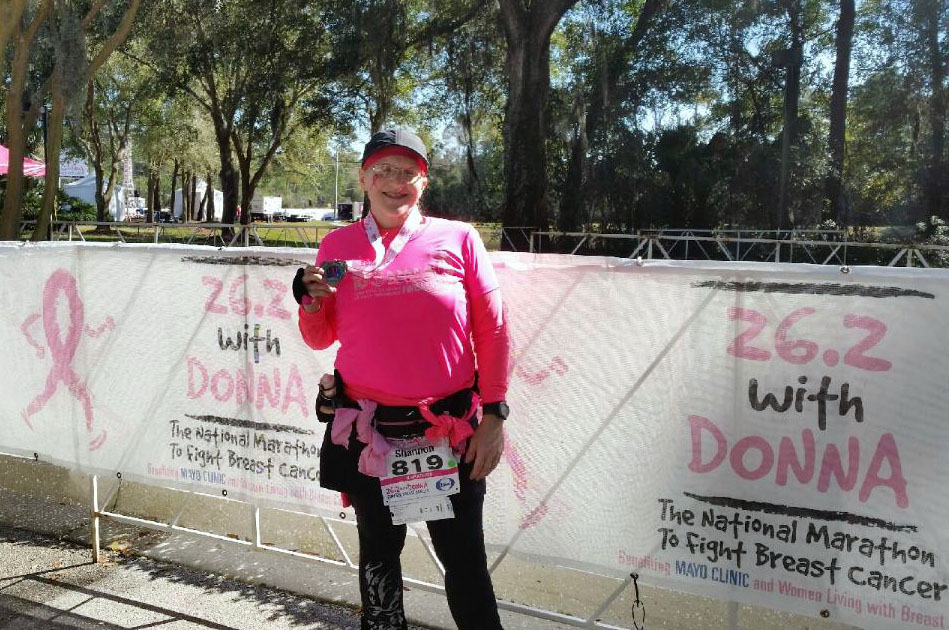