On March 5, 2017, I ran the 2017 Swamp House Half Marathon in DeBary, FL. This was my second time running this half marathon, as I ran it in 2016. It’s actually still my half marathon PR race a year later. Since I did so well last year, I was looking forward to running the race again.

After driving up to DeBary the day before the race to pickup my bib and packet, I was ready to go when I woke up Sunday morning. Since I’m temporarily living in Kissimmee with a friend, it took a bit longer to drive to the race, but I got there with enough time to hit the port-o-let and meet up with some fellow Orlando Galloway running friends. 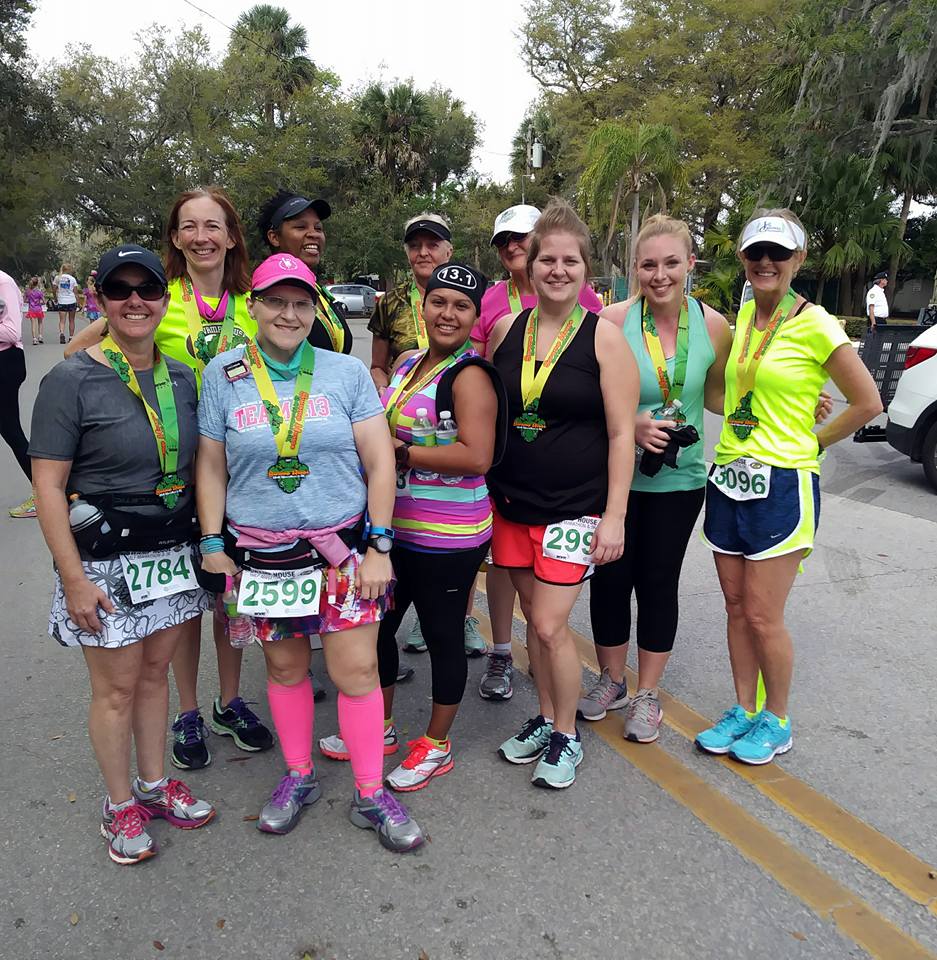 Some of the Orlando Galloway group at the race.

We chatted for a bit before the race began. I headed out with some of my Galloway friends doing 30:30 intervals. Right out of the gate, I admit I wasn’t feeling overly great. I just felt okay and not as energized as I wanted to be. I was happy to be with friends because I was feeding off of their chatter and excitement which got me feeling better and more upbeat.

By about mile five or six, the group was separating from one another. I ended up running with Colleen from that moment onward. We still had some Orlando Galloway folks right in front of us as well as behind, so we were in good company. Love being around my training group runner friends.

Colleen and I chatted about this and that and the miles began to fly by a bit more quickly. The course hit a portion of paved gravel type road and we both joked at how crummy that was. We debated on whether that surface was worse on our feet, or if our usual bricks back in Winter Park got that award. I believe we ended on agreeing that the gravel was worse. LOL! 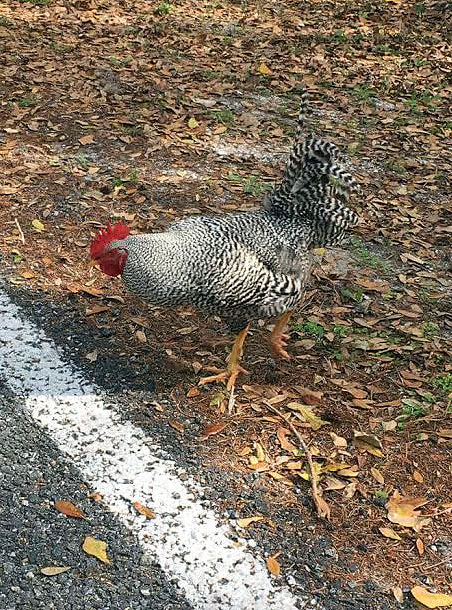 The final miles, a lot with that gravel road didn’t help when Colleen had an ankle cramping she told me she tends to get on longer runs or races. I wondered if it had to do with her salt and sodium levels, so I gave her a salt stick hoping it might help. Didn’t seem to do much, but she was a real trooper and kept pushing forward.

Seeing a rooster on the course was a fun distraction. He was just strutting along on the side of the road like nothing exciting was happening. He became a photo-op for us crazy runners. We sure love our animals and friendly wildlife seen on the run! 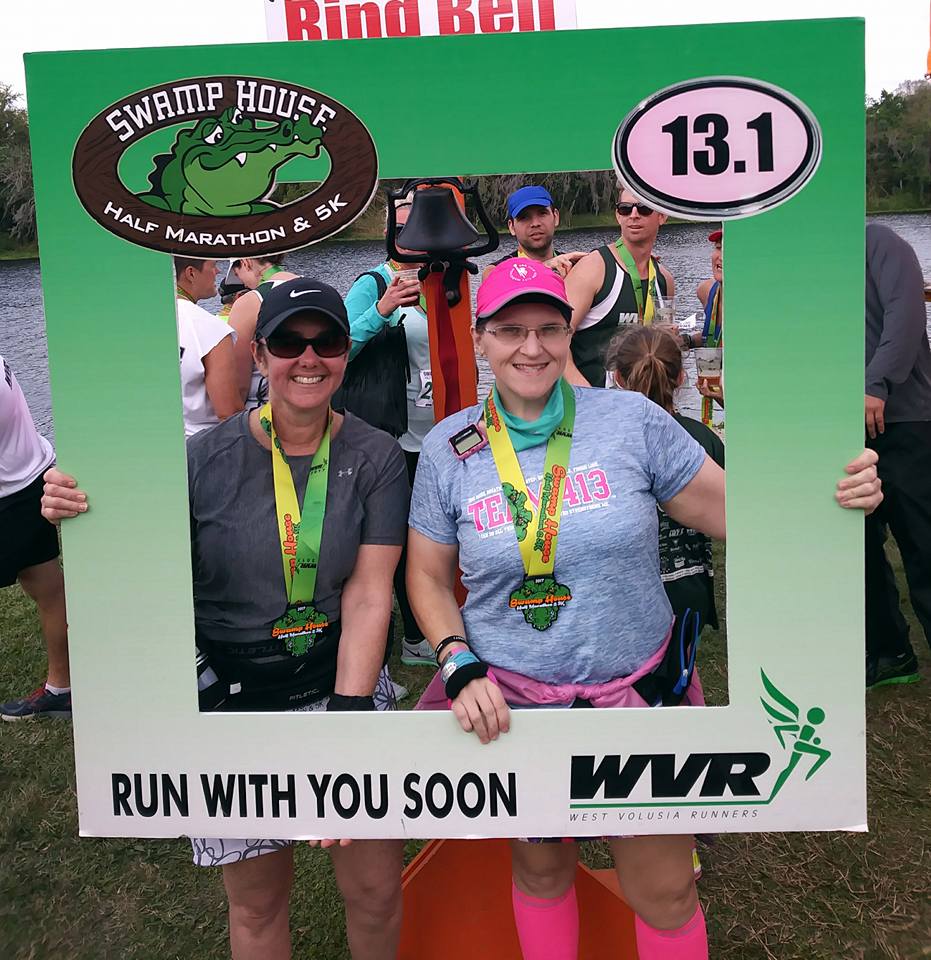 Colleen and I after the race.

By the time we were at the last 5k of the race, the sense of relief was felt between both of us. I always try to joke that, “hey, it’s a usual weekday run” at that point, but we all know it’s a mental trick after running 10 miles before then. I’m all about whatever helps you get through a race, so I use it a lot. I’m always feeling the run, but it’s all a mental game during so many of the miles.

Then, there it was, the glorious finish line. I held myself back a bit so I didn’t sprint too soon and run out of steam. But, when I did hit that sprint, I gave it all I had left in the tank. I pushed my legs, my body until I crossed that finish line at 2:57:23. It wasn’t a PR time, but I was proud of that finish. After running the Princess Half the weekend prior, it felt good to get that finish time. 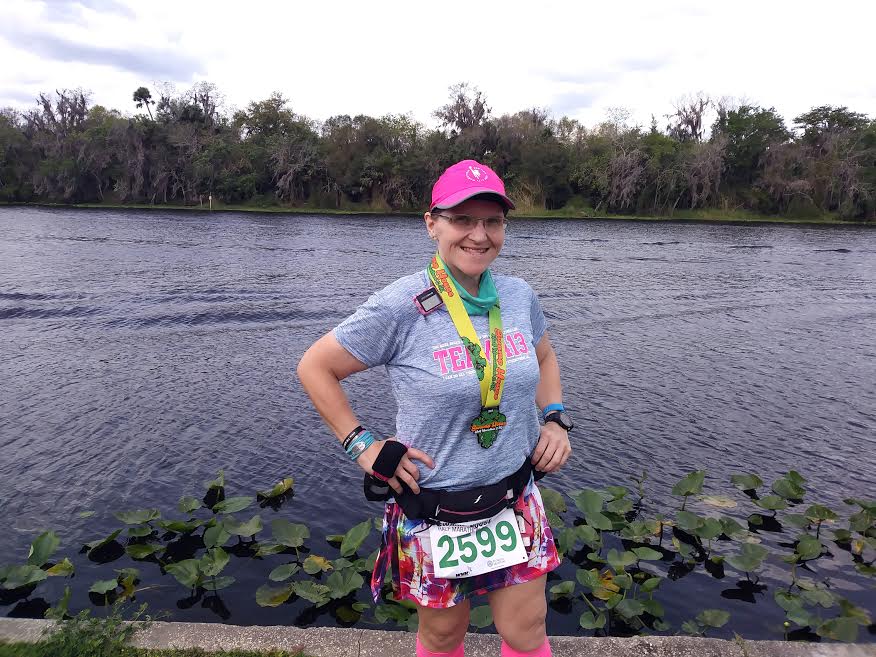 I enjoy this race, even through the gravel road stuff. It’s supported well with plenty of water stops along the route. I would do this race again next year, and likely will. It’s a fairly flat course and I can see myself getting a new PR there in the future.