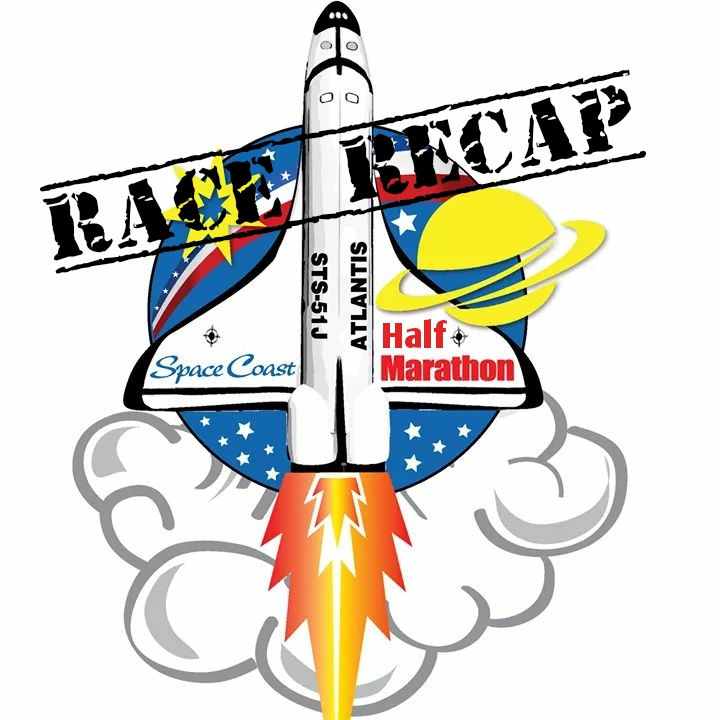 The 2017 Space Coast Half Marathon, the last year in the 5-year Big Bang series. I have to admit, I am happy that my five year commitment was completed this year. Space Coast is a fun race, always with a lot of friendly faces of those I know, but I’m ready to take a year or two off from the race. Not to mention, it’s always on Thanksgiving weekend, which makes it a bit busier when it comes to family and non-running friends during the holiday.

After running the NYC Marathon three weeks prior, I still felt tired going into the race. I was thankful that the Race Director allowed me to pick up my race packet/bib on race morning, so that I didn’t have to make two trips out to Cocoa. This allowed me to get some extra needed rest on Saturday after working on Friday all day (we don’t get Black Friday off at my job), which I was grateful for. 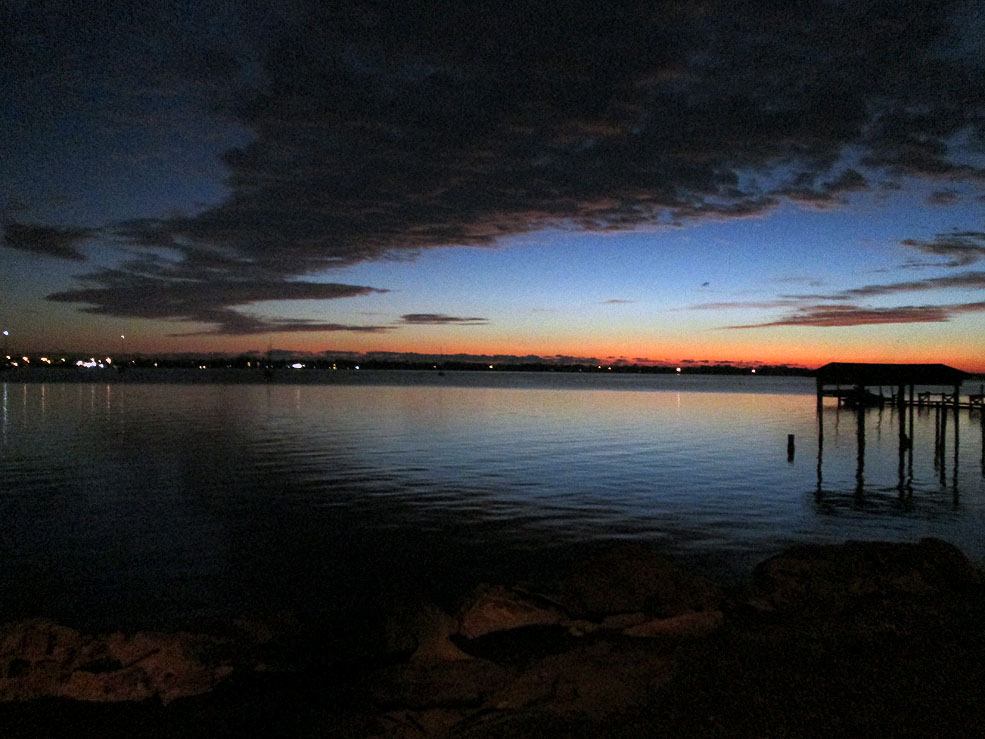 On race morning, I woke up at about 2:30am, and while I would have preferred to go back to sleep, I got up and ready. This time around, I was trying myself out to Cocoa, as I was hoping to stay until my friend and first-time marathoner, finished her race. It’s a pretty uneventful and unexciting drive out to Cocoa from Orlando. I got there right before 4:30am, and finally found a place to park.

I was able to pickup my race packet without any issues, and then hit the port-o-lets. I then had some time to look for my fellow Orlando Galloway friends and other runner friends. I found quite a few of them, before finally checking my bag and hitting the port-o-let one last time. 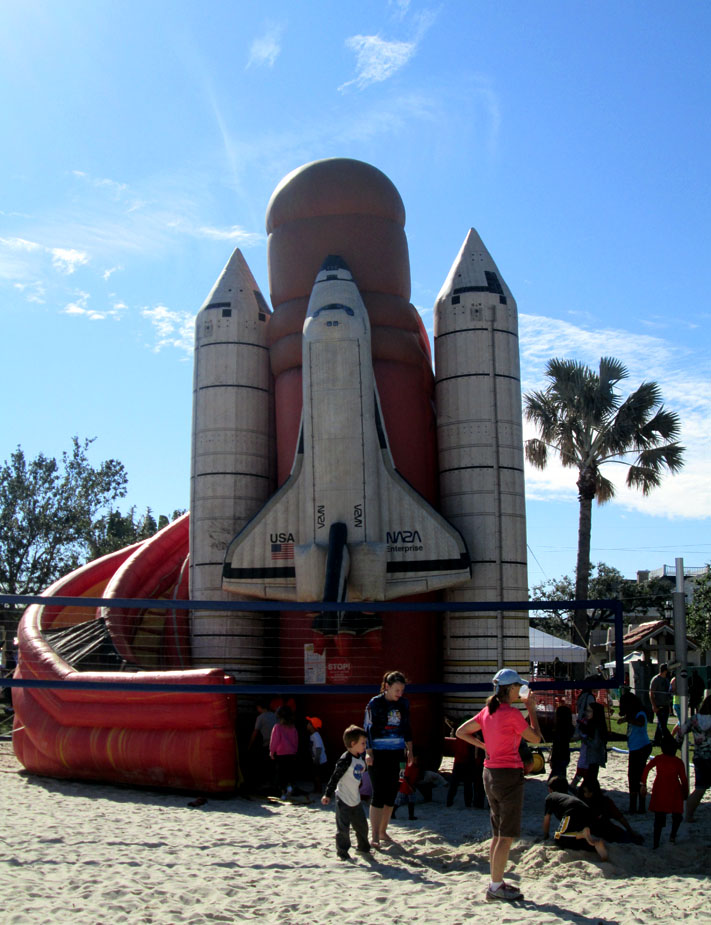 Walking to the starting area, I ran into two fellow Skirt Sports Ambassador sisters, and we were all wearing the same print! Always love running into other Ambassadors. I then found a few other Orlando runner friends as I made my way toward the three hour section. It was especially cool seeing one friend, Mary Jean, whom I haven’t run with in quite some time since she had been injured. It was good to see her back out there.

At 6am, the shuttle lifted off, and the half marathon began! I wasn’t running with anyone at the beginning, so I put on some music and got moving. It’s rare for me to actually run with music anymore, so it was kind of different. I’m so used to running with others now. But, if I run solo, I do like to have some good music on to keep me motivated. 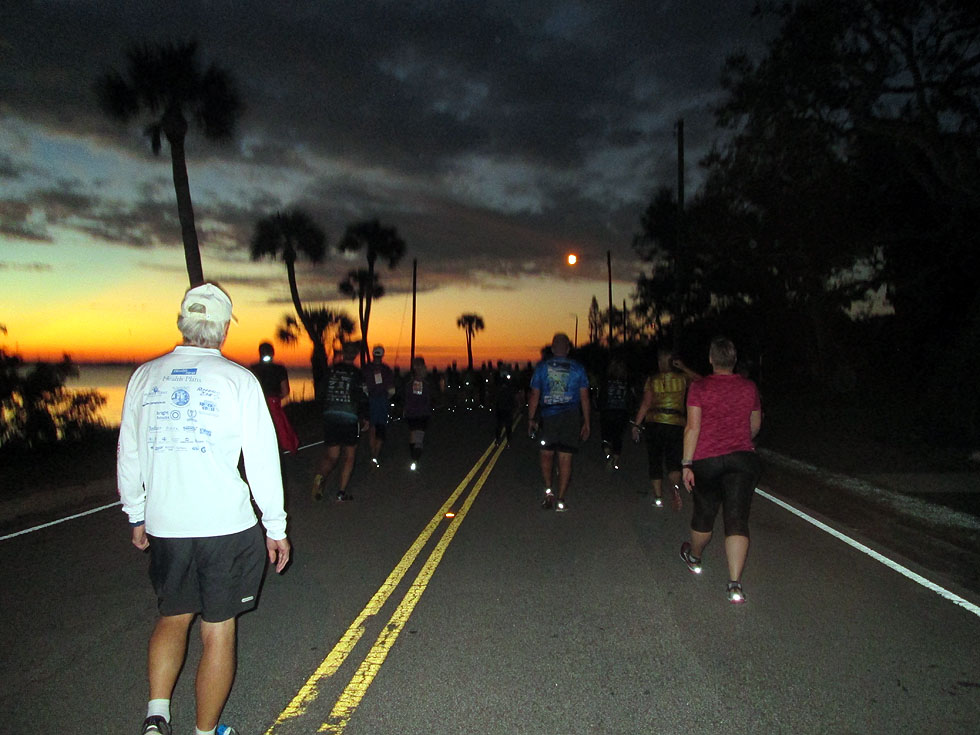 I kept a pretty decent pace for the first half of the race. I felt pretty good, my feet weren’t bothering me and my energy-level was good. Generation UCAN is definitely working for me in keeping my blood sugar balanced during my runs, and I love it.

Around mile 5, I spotted a couple of runner friends in front of me. I caught up with them, and we ran together. Once we hit the turn-around, I was happy that we were just under 6 miles to the finish. Unfortunately, the last 4-5 miles is where I began to fall apart.

My right foot, not the one with the PF, started to hurt. What was the deal with that? The more I tried to push through it, the more it bugged me. It was a pain along the outside part of the foot. My calf also started tightening up right along with it. This slowed me down a lot. I walked more hoping I could calm it down. Didn’t really work, so I just pushed through it. 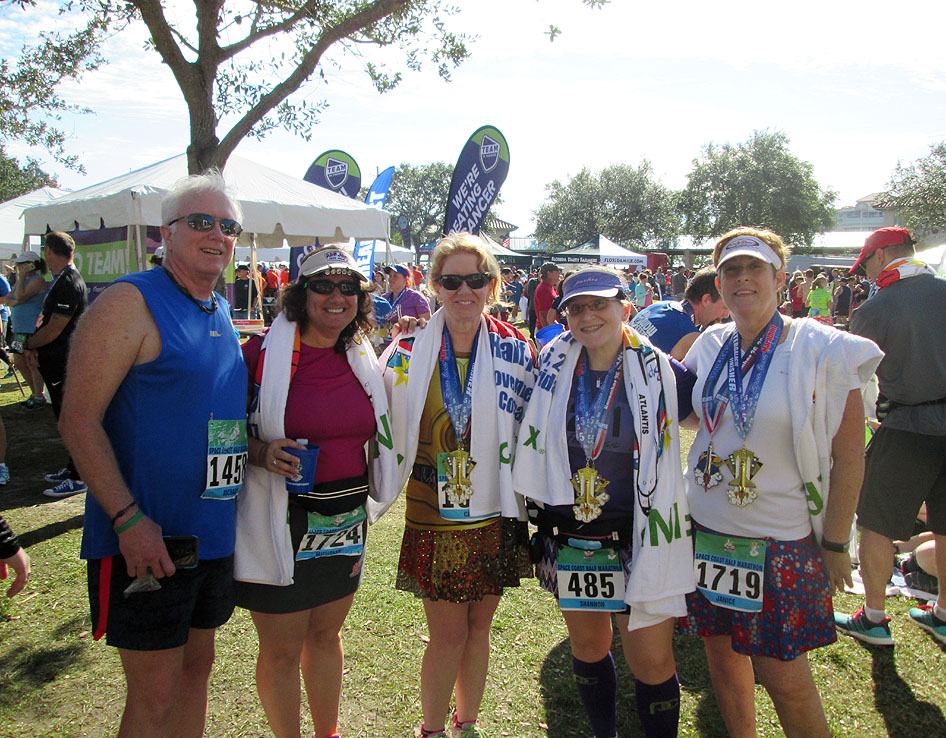 I couldn’t have been happier when I saw the final finishing shoot ahead of me. With Space Coast, the very end consists of a “tunnel” you go through with a couple of turns before you get to the finish line. I reminded myself to take it a bit easier on my final kick until I got to that first turn, and then I pushed it. I gave it everything I had (or maybe didn’t have) to finish strong. My right foot was not pleased, but I knew I had done my best to cross the finish line at my best.

Looking back, I think I somehow ran funny on my right foot, changing my gait. I also opted to wear both of my CEP Plantar Fascitiis sleeves that day, and in hindsight, it wasn’t the best plan. I should have just worn the one on my left foot, the one with the diagnosed PF. I believe it threw my gait off in some way. I took it easy the days after the race, and didn’t run for four days, when it was finally feeling better. 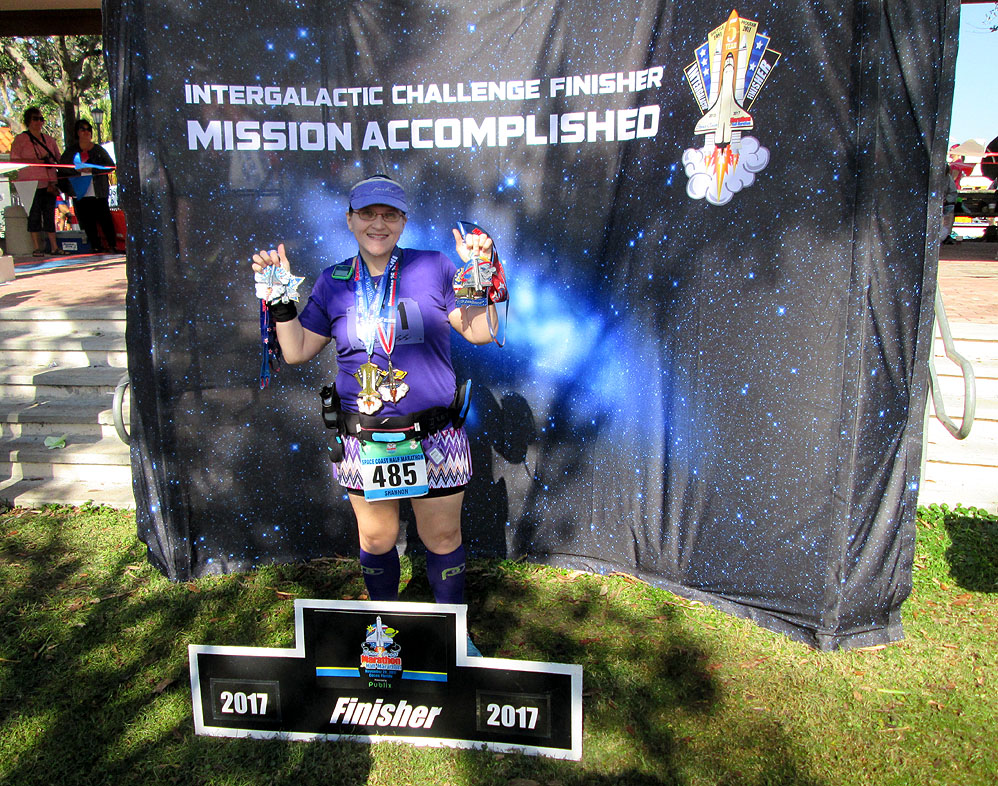 Like I said at the beginning, I love running Space Coast Half Marathon, but I’m glad that I’m done with the 5-year series I signed up for back in 2013. It’s been a fun journey, and I will likely return in 2020 for the next anniversary year, which happens to be the year they have the Apollo medal. That one looks pretty neat. 🙂 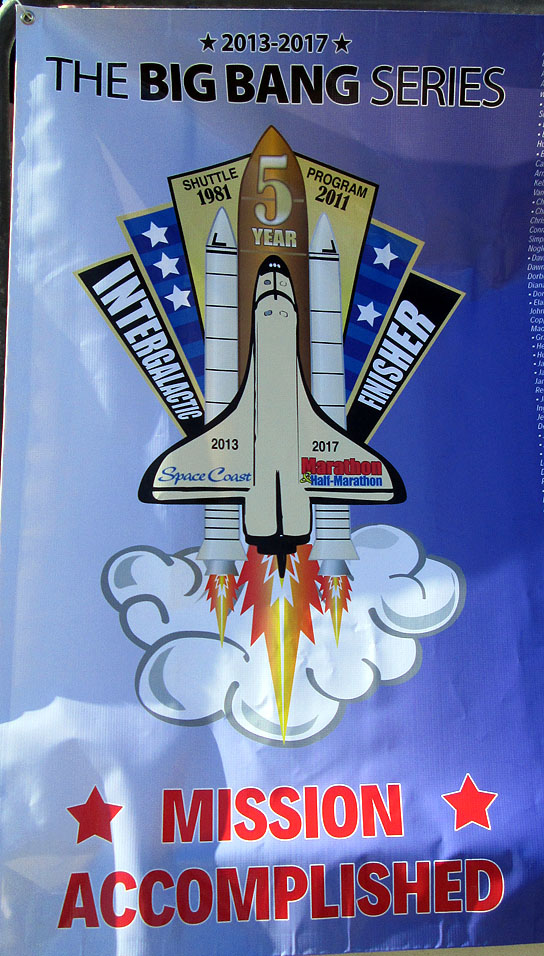