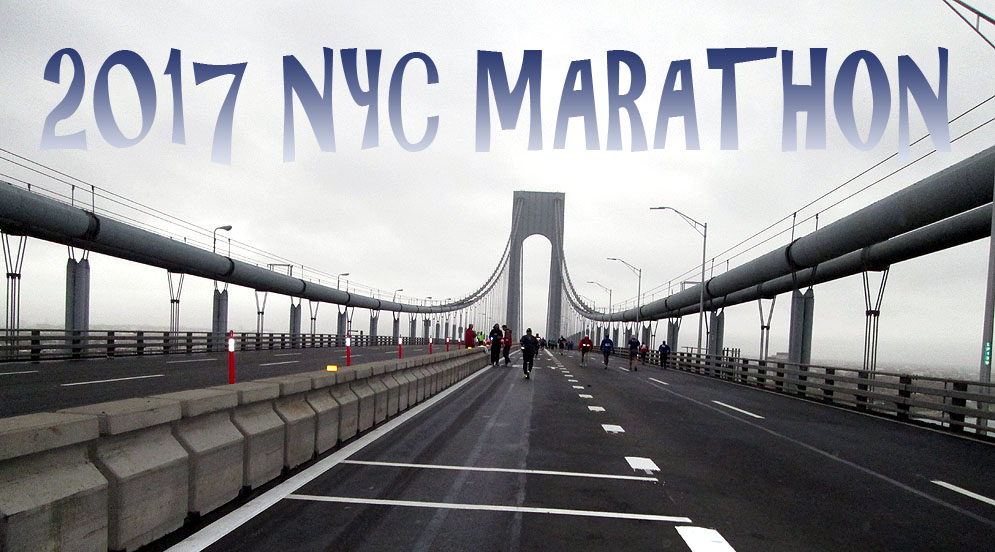 Looking back at the 2017 TCS NYC Marathon, a lot of that day is a blur. I can summarize it as a once-in-lifetime experience full of great friends, cheering spectators, and lots of ups and downs.

The day began early, with a 3:45am wake up call. I got dressed and ready to go in the hotel room before heading out the door at about 4:30am. I walked the three blocks to the subway station, where I waited with a number of other runners. It may have been early, but the sight of my fellow marathoners was comforting. I struck up a conversation with a couple o them as we waited for the train to arrive. 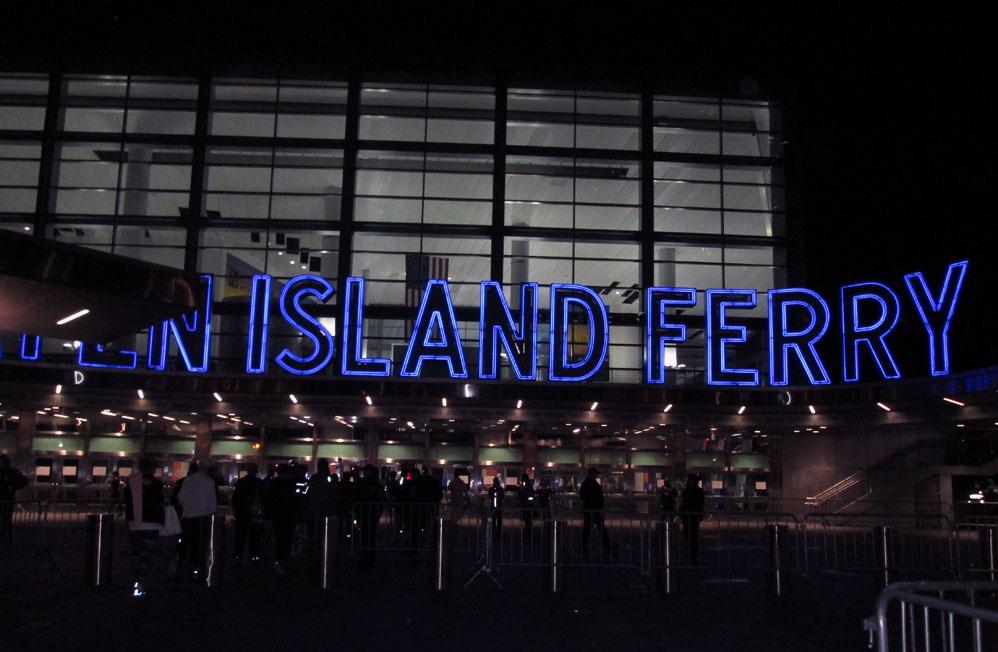 Once on the subway, I was getting off near the Staten Island Ferry. It was a short walk to the terminal, and unlike my 2015 experience, I was able to get right inside without any delay. Once I used the ladies room, I began to look for my 261 Fearless teammates. We were all trying to take the 6am ferry to Staten Island. I suddenly heard my name being called out, when I turned around, it was an online runner friend. Out of all the people in the terminal, she spotted me. Funny how that sometimes works.

A few minutes later, my team and I found one another. We all made it our job to keep one another together during our brief adventure to Fort Wadsworth. This of course would take some work. Jokes about how we should have brought a rope to hold onto were said aloud. Not a bad idea, especially when we followed the crowd of runners onto the ferry. We made it on-board all in one eight ensemble piece. Finding an area to sit, we were happy to be off to the starting village. 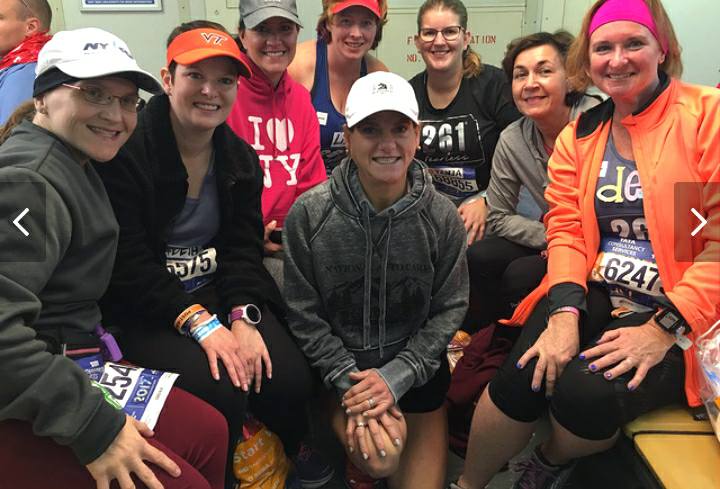 Team 261 Fearless on the Ferry.

The ferry takes you to Staten Island, where you need to walk a little ways and board buses. The buses actually take you to Fort Wadsworth, where the marathon start village is located. This travel from your hotel to the village is why runners have to get going a lot earlier than they may be starting the race. I estimated it took us about 90 minutes for the travel portion of the morning. Runners then go through NYPD security before entering the start village.

The group of us headed toward the Charity section, while 261 Fearless didn’t have an area inside of it for us, we sort of set up camp right outside the entrance. We made our own little waiting area with heat sheets and garbage bags to sit on. This gave us time to use the port-o-lets and what have you while we waited for the rest of the team to arrive. 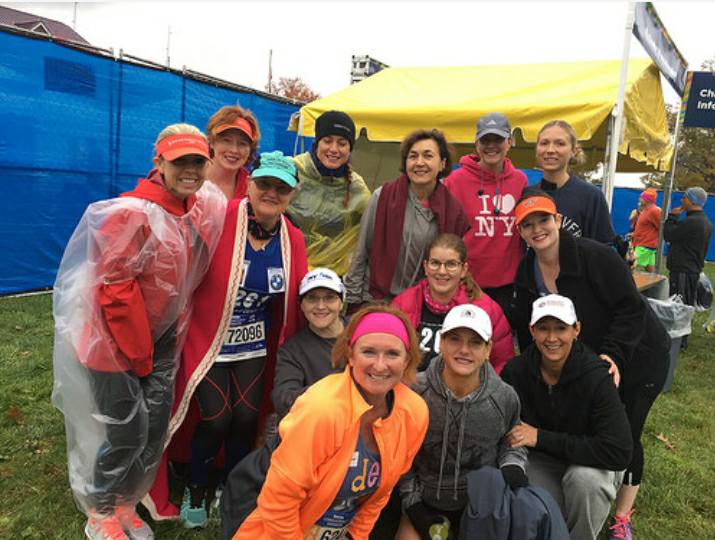 The team in the start village before the race.

This race was extra special because I would be able to start with my team and Kathrine Switzer! I was super excited about that, and also a bit nervous. A NYRR official came to escort us to the starting line area after about half an hour in our make-shift camp. A slight fiasco of trying to get to the beginning of wave one through the corrals had us pushed back to where we began, by the Charity runner section. Before we knew it though, we were escorted another way and found ourselves by the starting line. Yes, we were in a restricted area. Talk about a VIP experience!

The team hung around where media, VIPs and elites were. I couldn’t believe how neat this whole new perspective was. While we waited for our time to start, we had the opportunity to watch the wheelchair athletes start, followed by the female elites. I didn’t spot Shalene Flanagan, but she was in that pack. Yes, I was a little more than “star-struck” at the talent that surrounded us. 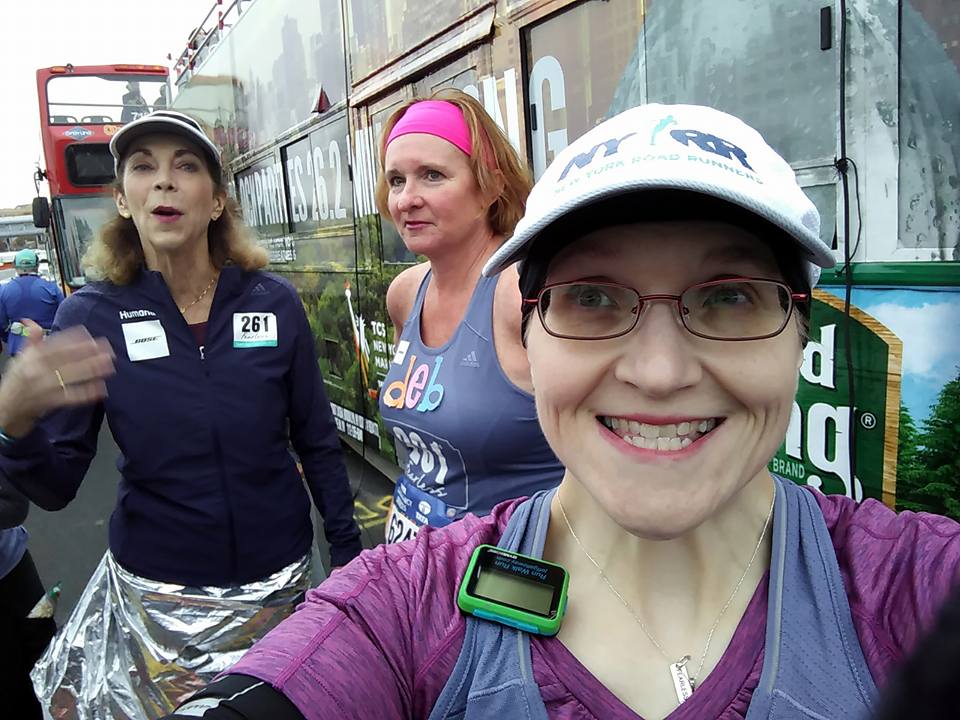 Pre-race fun times with Kathrine and the team.

Kathrine came out and we got to have some team moments and photo ops. We laughed, we sang (New York, New York of course), and we just enjoyed each others company. This pre-race experience was like none I’ve ever had before, and likely won’t have ever again. I felt blessed to be there. 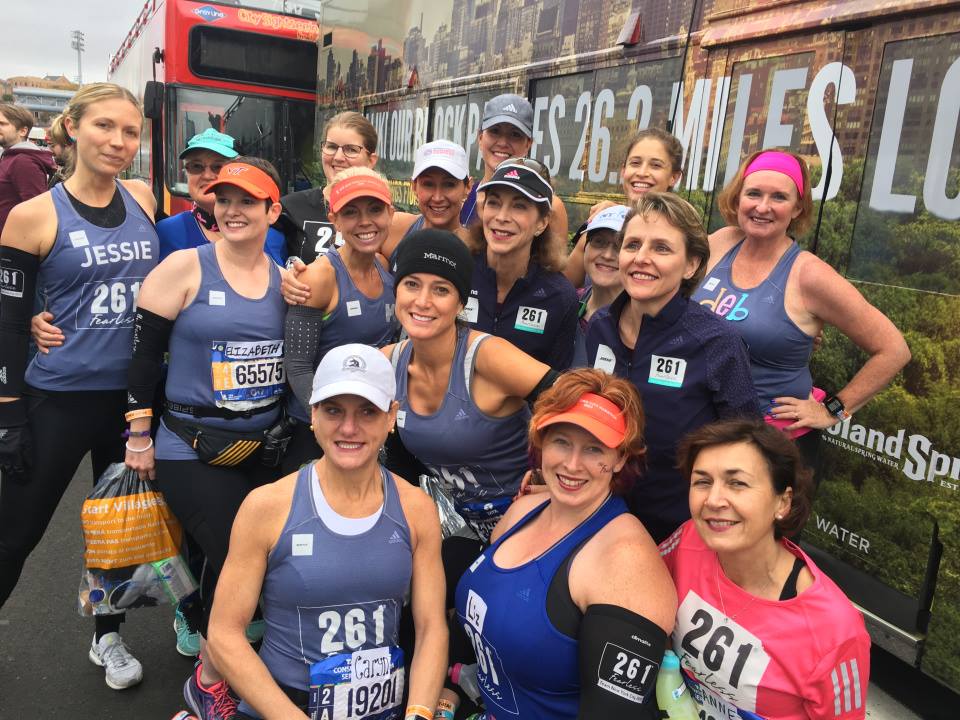 Team 261 Fearless jumped into the starting area right after the wave one runners went by. Before I knew it, we were crossing that starting line and had begun the 2017 NYC Marathon. I did my best to keep up with Kathrine and the rest of the team, but after almost two minutes, I fell back. It was incredibly windy on the Verrazano-Narrows Bridge, and it took a lot to push myself. It was neat though to be one of a very small group of runners on the bridge once I lost sight of my team. 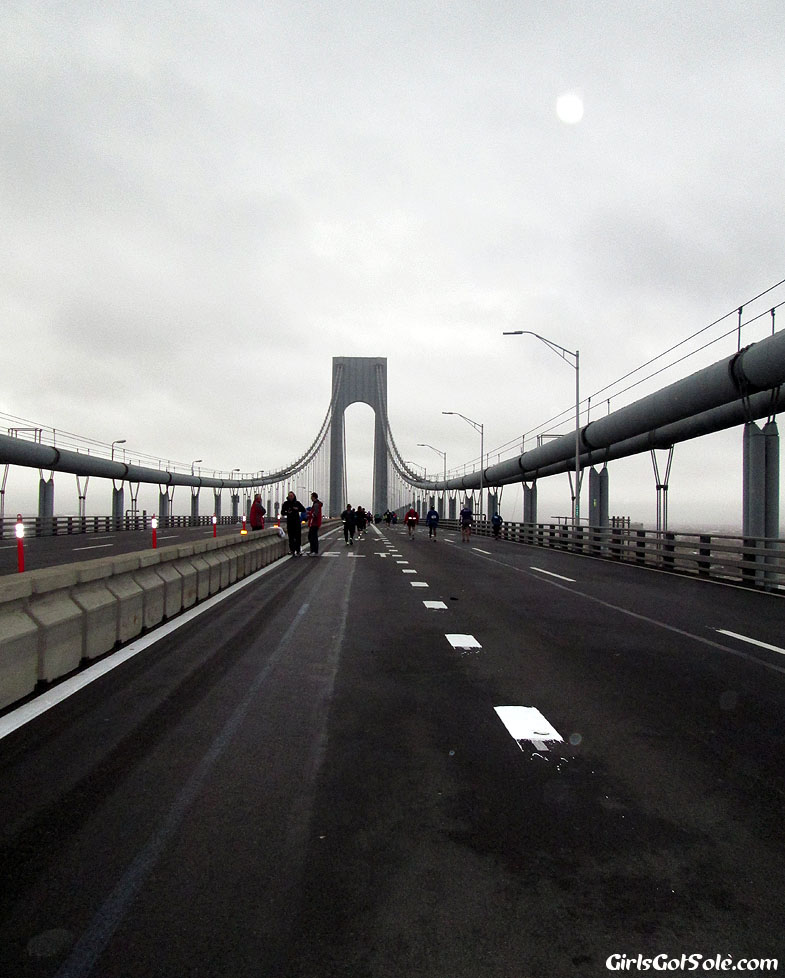 Once I made it over the bridge, I was in Brooklyn. This is one of the coolest boroughs, as so many New Yorkers are out cheering on the runners. I may have lost some momentum on the bridge, but I began to regain my pace. I high-fived a number of people, mostly kids. It’s a great feeling being out there on those streets during the marathon. You really do feel like a celebrity.

Brooklyn is quite a lot of the race, I remembered that from when I ran it in 2015. And, looking back at this year’s race, it’s the borough I remember most (less for Manhattan). I was at my best running through Brooklyn, feeling pretty good. Was keeping a nice pace too, about a 14:16 per mile.

After a port-o-let stop before the 25k mark, I began to not feel so well. This is about the time I began to slow down and began walking. My feet were not pleased, not to mention that I was wet and cold due to the constant light rain that lasted throughout the marathon. Since I had dumped my gloves back in Brooklyn somewhere (I am thinking about mile 10), my hands were getting extremely cold like ice. 57 degrees with rain didn’t make this Florida girl feel so happy. I was uncomfortable and thoughts of quitting entered my brain as I hit mile 16. 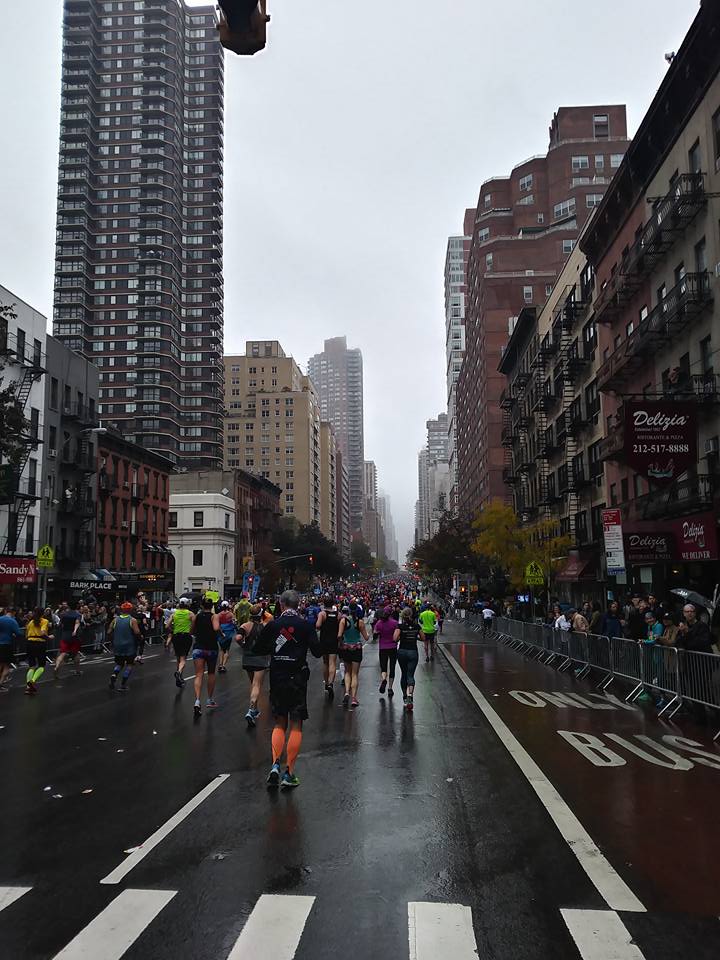 I wondered if I could continue, and mentally I really didn’t want to be out there any longer. As I was walking along, I struck up a conversation with another runner, he was also walking not looking so happy. We both agreed this was a rough race with the rainy cold. He mentioned how he had never seen so many people walking before the 19 or 20 mile mark. I guess I wasn’t the only one feeling down. It was kind of comforting knowing that I was in good company. The guy told me that he was thinking of quitting as well, but that his wife was in Central Park near the Finish Line.

I wished my fellow runner well as we both went off at our respective paces. As I walked along, I pulled out my phone and posted on my Facebook wall, “Struggling…so walking right now.” I was beginning to tell myself to just make it to mile 20, then I could stop. I was seriously considering my first-ever DNF. I began convincing myself that it was okay because I was freezing, my feet were in pain and hey, I did just get out of the hospital a few days before the race. 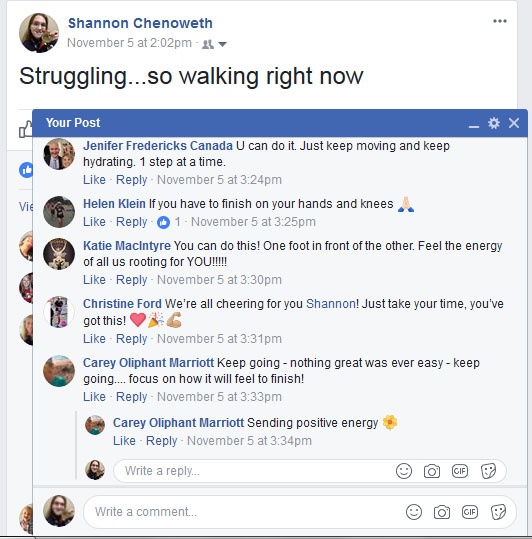 Prayers and encouragement from the best runner friends!

Thankfully, I am blessed with some of the most amazing friends. Not only did the running community encourage me and pray for me through that Facebook post, but my running group began to text me. I was virtually embraced with such love and motivating encouragement to keep going that it almost brought me to tears. My friends told me to just keep moving forward, no matter if I needed to walk.

Within about a 15 minute period, through their motivation and forcing myself to take my final Generation UCAN gel, I started to feel better. Suddenly, my hands didn’t feel like ice anymore and I had enough within me to actually start running again. What a blessing I had with the running friends that supported me from hundreds of miles away!

When I hit that glorious 20 mile mark, I smiled. Sure, I was exhausted and wanted to be done, but I no longer wanted to quit. I was going to push and give it my all to get to that finish line. My friends were right behind me and I knew I could not only not let them down, but most of all, I couldn’t let myself down. I had worked too hard to quit now. 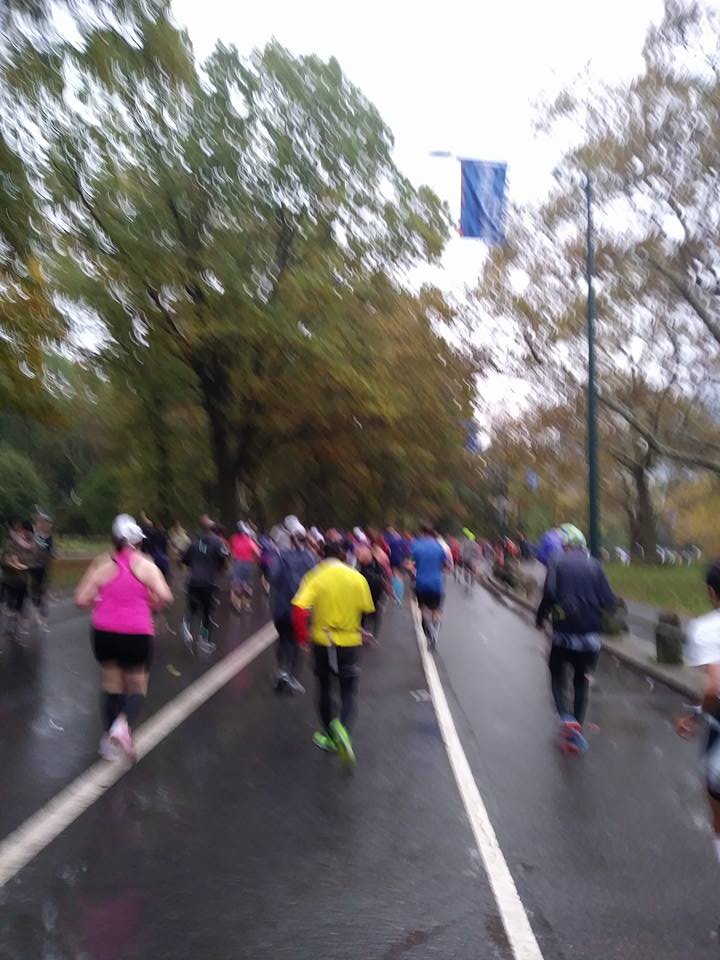 On course inside of Central Park.

I got back to my run/walk/run routine, but did walk more at times through the remainder of the race. Once inside Central Park, I knew I was finally in the home stretch. I was SOOO close that I could almost taste it. Of course, the last 2 miles felt like forever. Because hey, after 24 miles, it was almost forever. Ha.

Suddenly, I could hear the finish line cheering and announcer. Then, I passed the 25 mile sign. Just 1.2 more miles to go! I was really almost there! Every step had me holding back tears. Tears of happiness, tears of sadness, tears full of so many emotions that are not easily described in words.

Then, there it was, the big, beautiful, awesome finish line! A line a couple of hours before I didn’t think I would make it to. I gave my final push and crossed it; the finish line of my second TCS NYC Marathon. It was my toughest marathon, and as I received my medal, I paused to look at it. That round piece of shiny medal represented so much to me, literally blood, sweat and tears. 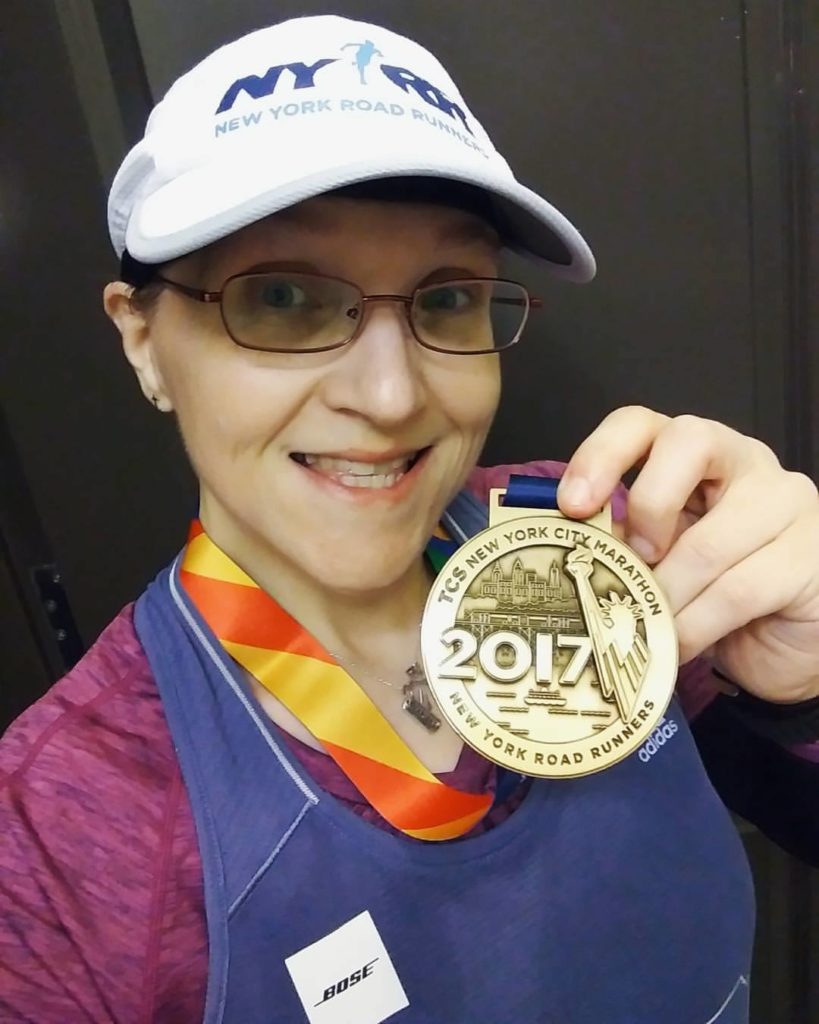 When I began training for the 2017 NYC Marathon, I remember thinking back to my 2015 training. It was such an awesome year for me and a dream experience. This year’s marathon and the training leading up to the race were completely different. 2017 was a tough year for me in so many ways, and finishing the NYC Marathon this year is so much different. It was about overcoming those bumps in the road along the journey and coming out stronger in the end.