Note: Yes, this race recap is very, very late. Apologizes for that. I’m getting caught up on my race recaps so that I can be up to date for 2017. 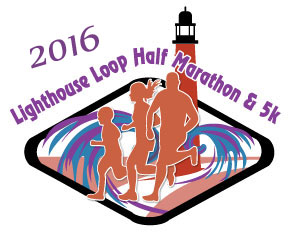 The Lighthouse Loop Half Marathon took place on October 30, 2016. It was the second time I ran the race, as I originally ran it back in 2012 for the inaugural year. It was my third half marathon I believe, so definitely one of my early races!

I had driven over the day before with one of my friends, Susie to get our race packets. We were picking up packets for a few Galloway folks, including the two other girls who were riding with us the next morning. Packet pickup itself went smoothly, and we scoped out the parking situation. I recalled parking in the same area back in 2012, so it was vaguely familiar. The only fun part about getting to the start of Lighthouse Loop is that you have to walk over the A1A bridge to get to the start. At least it’s a good warm-up! 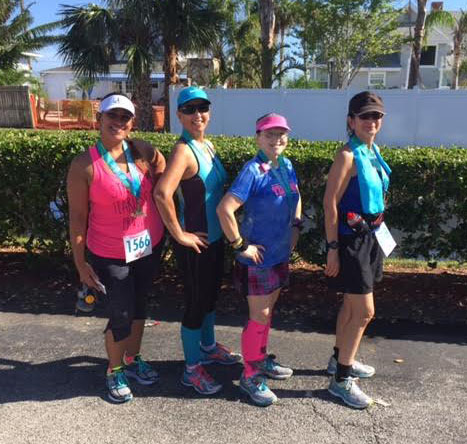 Race morning, we all met up and piled into my car. It was early (like 4:15 am early), as the race itself was starting at 7:00am. The drive itself to Volusia County is about an hour, so we figured leaving by 4:30am would get us there with plenty of time for a restroom stop at a nearby convenience store and to get over that A1A bridge to the starting area.

Upon arriving, we parked pretty easily, then began our trek over the bridge. At least we were getting a heck of a warm up walk before our 13.1 miles! We had some time to use the port-o-lets near the start before getting into the “corral” (I say ‘corral’ because it’s a very loose system, just some predicted finish time/pace signs). Chatted for awhile and met up with some fellow Orlando Galloway friends before it was time to get going. 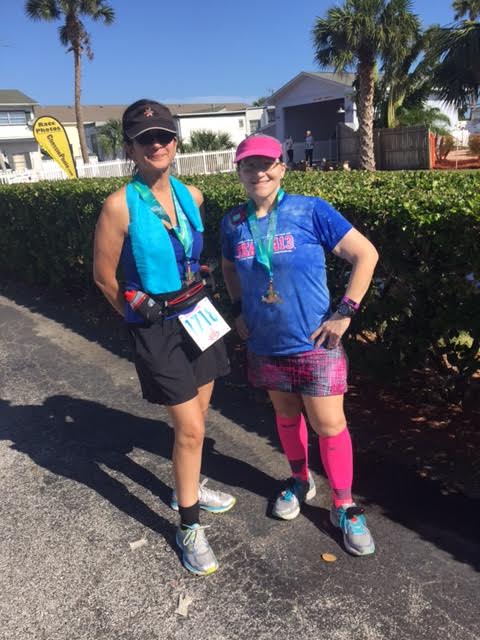 My running buddy, Lourdes and I.

My friend and fellow Running Agent, Lourdes and I decided to run the race together. Susie and Esther (my other two friends) hung with us a bit through the first mile. Susie ended up taking off ahead of us and Esther was behind us by a few minutes.

The course itself is pretty nice, you run along the area neighborhoods by the Ponce Inlet Lighthouse. After that first mile, the course definitely opens up and it’s not so crowded. Makes it easier for us Galloway method runners to do our interval thing. 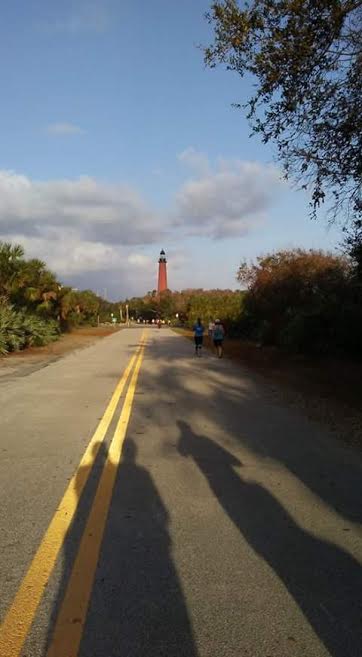 The first half of the race went pretty well. We were keeping a good pace, and despite feeling like I was pushing a bit, I was doing okay. I think around mile 6ish was when I began to feel a bit out of it. I say that because as we were approaching the Ponce Inlet Lighthouse, my friend says, “oh look, there’s a house across from it.” My response can only be described as funny. I replied, “no, it’s a place.” Um, yeah…a house would be a place. Duh. LOL! This response came out of my mouth so fast that I didn’t realize what I was saying. The both of us then erupted in laughter. I may have been only six or so miles into a half marathon, but apparently, I already had “marathon brain.” 🙂

The next miles came slowly. Or, they sure as heck felt that way. We were both feeling the heat and humidity that had come with the rising of the sun. For some reason, my legs were NOT pleased and wanted to stop. A part of me was not happy about that at all. I recall thinking, ‘what in the world? I’m a marathon runner for goodness sake, why is this 13.1 race so hard?’ It was my 22nd half marathon, and I was disappointed in myself at that moment. 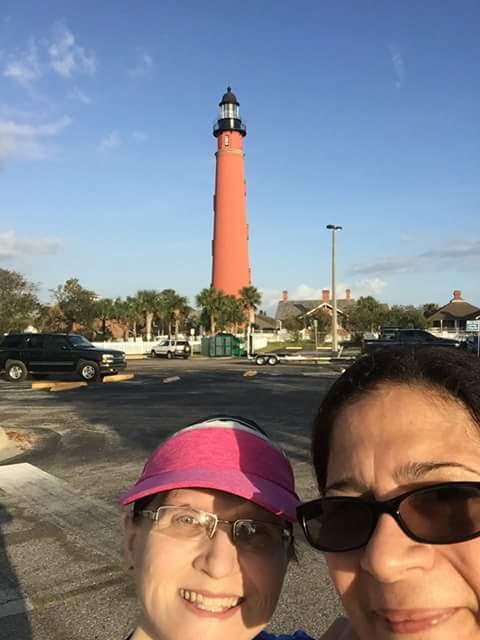 I remember thinking back to my training and trying to figure out why in the world this particular race felt so hard on me. In all honesty, I questioned myself and my running during those final miles. How could I do another marathon if I couldn’t handle this half marathon? Those were the sorts of things that circled around in my head.

As Lourdes and I approached the A1A bridge, we both looked at one another and said, almost simultaneously, “I’m walking up.” Great minds think alike! We ignored my GymBoss and it’s constant beeping every 30 seconds as we walked our sore legs up. To our credit, we did resume our run/walk intervals once the downhill portion came. Of course, that was the easy part of the bridge. Ha. 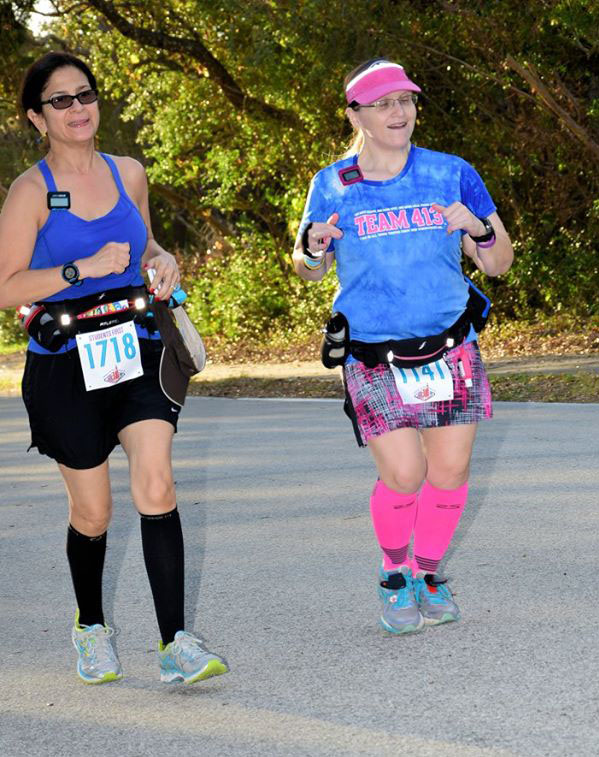 Lourdes and I feeling it during the second half of the race.

Finally crossing that finish line with a finishing time I was not at all pleased with, I was more than happy to be done with that 13.1 race. It was a half marathon I was glad to finish, but that was about it. Suppose we all have those races, the ones we are just happy to be done with, period. That’s what the 2016 Lighthouse Loop Half was for me.

Looking back, I recall a couple of good moments from the race. One, is running with a good friend. We kept one another going, and that’s an invaluable thing. Two, that on at least two occasions, I had fellow runners tell me that they loved the back of my shirt. I was wearing one of my Team 413 shirts. It has my favorite Bible verse on the back, and I love how much it not only motivates and inspires me, but that it does the same for others. 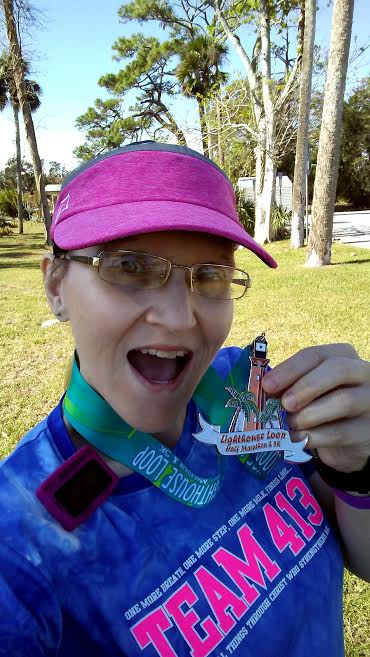 Overall, Lighthouse Loop is a good race. It just got too warm and I didn’t feel good about my performance. The only issue the race itself had was that one water stop ran out of water. This was about mile 8 and we had to go another mile and a half to get to the next water stop. I heard later that the race director got on that problem right away, and a few friends behind us had water at that mile marker. I just wish the volunteers would have noticed sooner so that the water didn’t completely run out as hot runners were coming up seeking out hydration.