This past weekend, I ran my favorite local 5k. It was my fourth year running the race put on by Track Shack. It’s become a favorite mostly because it takes place on or right around my birthday each year. A birthday run? You betcha! I can’t think of a better way to start off the day than with a run, especially with friends.

Two of my fellow Dream Chaser group girls and I decided to put in some miles before the 5k, so we met at 6am and ran just under 3 miles in the area. The race takes place in Winter Park, and our group does the majority of it’s training runs in that area. We finished up our “warm-up” at about 7am, which gave us 30 minutes before the race was set to start. 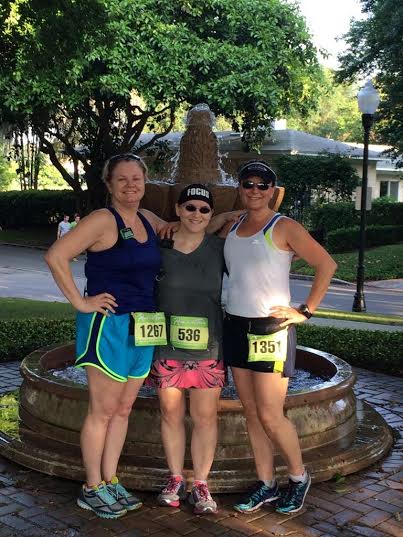 With friends Lisa and Meg after the 5k.

A number of other running friends had arrived by that point, so it was nice to chat with them before we headed over to line up in the starting area. My friend Lisa and I decided on doing 30:30 intervals and shooting for a 35 minute finish time. I knew that my 5k PR was in the 36 minute range (forgot to look up the exact time before hand), so anything under 36 minutes would definitely be a PR for me.

After the National Anthem, the horn blew and everyone was off. While I had my Garmin, I did glance at the timing clock as we crossed the start mat, we were about a minute behind the race clock. The beginning of the race was pretty crowded, so Lisa and I definitely went out of the gate too fast. That became clear later on, but in all honesty, I knew that I was doing that when I looked at our pace on my watch. Things got a bit less crowded by mile two, but we were still working to stay together and maneuver around people. Our pace did slow a bit on that mile, which was still in a good pace range.

We were both huffing and puffing, it was apparent on our 30 second walk breaks. It was a push to keep the pace up, but I knew we were both more than capable of the pace we were doing. A 5k gives you the chance to push yourself speed-wise unlike say a half marathon where it’s more about endurance for the long haul. Our last mile was the slowest as it turned out, partly due to the dirt road you get to run on, and partly due to going out too fast at the beginning.

During this race, you get the unique opportunity to run down a private road where a number of peacocks live. It’s a highlight of this race, and a lot of folks run or walk this 5k because of that. Since our group runs in the area (just not down that private road) all season long, we do see some peacocks (mostly hear them though) some mornings, but the chance to see them on the private road where they basically live is great. 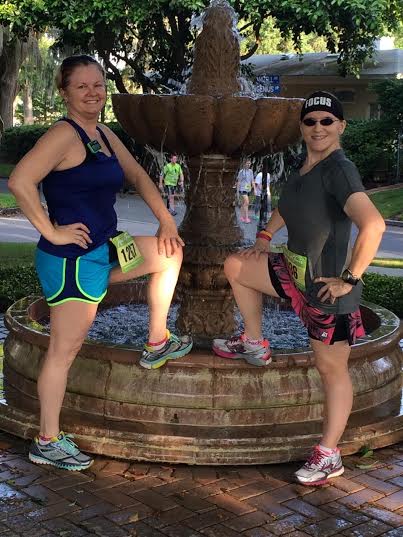 Lisa and I after the 5k.

We came down that dirt road and I could tell it slowed me down, as the dirt isn’t really hard packed. I had to lift my feet more as I went along. Once you come off of the dirt, you get onto a paved portion and I was able to pick up my pace a bit again. When I spotted the finish line and timing clock ahead, I knew we missed making it in 35 minutes. I crossed the finish line with an official time of 36:31. While a bit disappointing that I didn’t get under 36 minutes, I felt good about that time. I had pushed myself and knew it was still a nice 5k time for me. What I didn’t know was that it WAS a 5k PR for me. By 7 seconds, I now have a new PR. When I saw that, it was an awesome feeling, 7 seconds is 7 seconds! And, it was a nice birthday gift for sure.

Run for the Trees is a point to point race, so you have the option of taking a bus back to the start or walking back. It’s about 1.5 miles back to the stadium where it began, so I always just walk back. It’s a nice cool down and gives you a chance to talk with friends as you make the short trek back. When you get back to the start, there’s the usual post-race bananas, water and such available. This race also gives all runners or walkers that participate a baby tree! Everyone takes home some kind of small tree they can plant in their yard. And, all winners get larger trees as awards rather than plagues and such. Very environmentally friendly race that’s a lot of fun each year.