Yes, this race was last month, so my race recap is late. I usually try to get my recaps/reviews up within a week or so post-race, but this one just got away from me. That said, better late than never, right? 😉

I have been wanting to do the Gate River Run since last year, but it is always the same weekend as a local race I love, the Winter Park Road Race 10k. This year, I decided that I was going to run it and have to miss my local 10k this year. After finally doing Gate, I have already decided to come back next year, if not the following.

On Friday afternoon, my friend Terrie and I left Orlando for the drive up to Jacksonville. It’s a little over two hours away, a drive I’ve come to know having run the 26.2 with Donna the last 3 years. I only wish it was a bit closer, as I really do like Jacksonville. After hitting a bit of traffic first making our way out of the Orlando area, we were able to make pretty good time. First thing we did upon arriving in Jacksonville was to check into the hotel. Once we got our stuff into the room, we headed back out to go to the race expo. 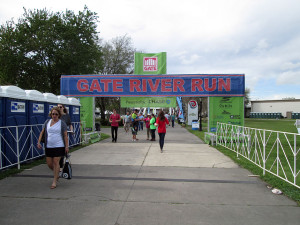 Upon arriving at the expo, I found the 26.2 with Donna table, as I was going to help out for a bit. Terrie headed off to check out the vendors, as it was a big expo with lots of companies present. I had a good time talking about the DONNA with people who came by the table and hopefully convincing a few of them to come run with us in 2016! After my volunteer time was up, Terrie met back up with me and I went to pick up my race bib and swag. This year’s shirt was pink for the ladies which I liked a lot. We also got either a pint glass or coffee mug. Definitely nice stuff for the runners.

We spent about 30 more minutes at the expo so I could check out vendors and get a few freebies along the way. The two of us then left to get some dinner. After some conversation on where to go, Chipotle was chosen and we found the closest one. Unfortunately, the location we chose was also one with quite a line of folks waiting to place their order. We got in the line though, because we figured by the time we got anywhere else, we could probably already be eating. I think it took about 30+ minutes before we made it to the front of the line and were able to finally order. I think by then we were so hungry that we ordered, ate our food and headed back out the door in that same amount of time it took in line!

Getting back to the hotel, we laid out our race outfits and watching some television before actually getting to sleep. We woke up at 5:30am to get ready to go. The race has a later start than most races (8:30am for Wave 1), so we had a bit more time, but not much with the road closures and such in the morning. Within an hour of the alarm clock going off, we were heading out the door of our hotel room. 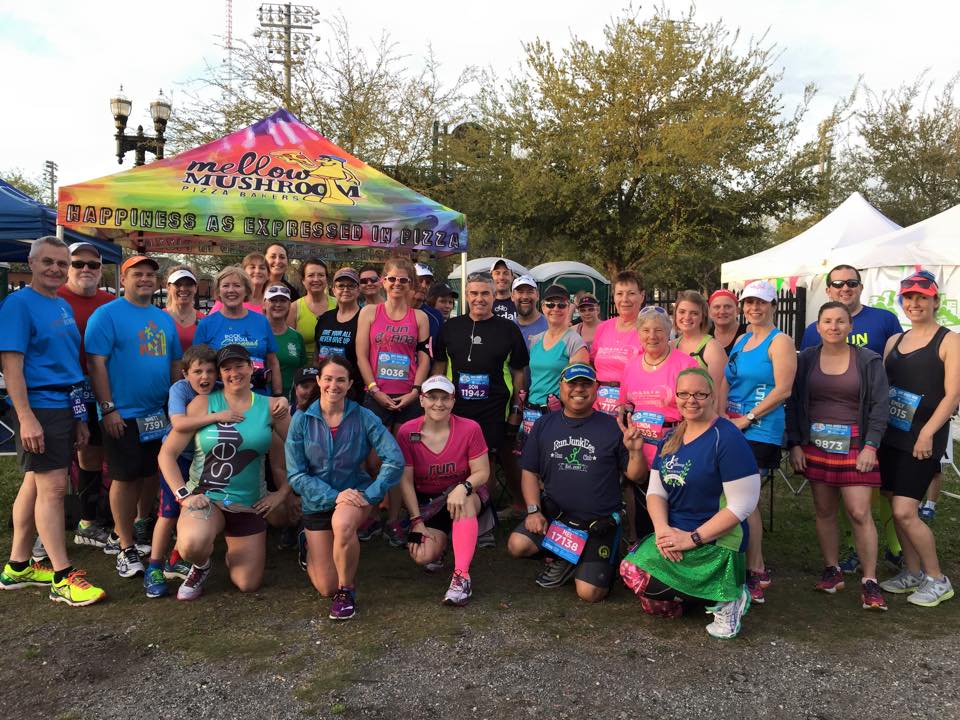 Galloway runners before the race start.

The traffic getting to the race start wasn’t too bad for the most part. We made pretty good time in getting there and parked. Definitely had plenty of time before our wave was going to start the race. Lots of tents and folks were everywhere in the Runner Village. The only bad part of that was trying to find a particular group. It took what felt like walking around here and there forever to locate the Galloway tent. Terrie was ready to give up on locating it, but I was too stubborn to let it go. Thankfully, we did find it and some of my Jacksonville Galloway friends. Not only did I want to find it because I’m a Galloway member, but I wanted to see some of my fellow DONNA friends who run with the Jacksonville group. 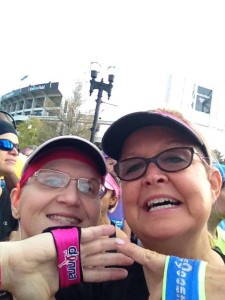 We hung out with our fellow Galloway runners until we had to all head over to our corrals. I chose the last corral because it was called pink (I should have been at least one corral up with my pace), so we had the longest to wait before we were to actually start the race. While we were waiting, we goofed around and took some pictures and chatted with folks around us. We also had a bit of drama, another runner somehow hurt her ankle while waiting at the starting line. Her leg was getting swollen up and she was crying in pain. I felt really bad for her, not sure how she did that before the race even began. Her friend helped her to the nearby curb and called for EMS. It seemed like it took them forever to get there to help her. I guess not many runners get injured before a race starts. Help arrived with a wheelchair, and the girl gave us a thumbs up as she was wheeled away. Hopefully, whatever she did to injure herself wasn’t too bad in the end.

By the time our corral got to move up to the starting line, I was anxious to get this race going. Once the starting gun went off I literally took off across the starting line at the front of the corral. A first, as I never go near the front, but this was the slowest corral so I felt comfortable in doing so. Once I hit the first bridge though (yes, I said first), I slowed down as we were running on grates as well as dealing with a bridge. 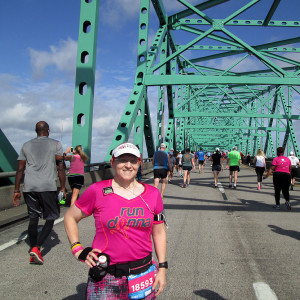 I was doing pretty well until about mile 6. It was then that I was feeling it. Feeling tired, hot and my legs were not happy. My mind began to wonder if it was such a good idea to run a 15k less than a month after doing a marathon. I’m not used to running in Jacksonville less than for the 26.2 with Donna, so a bridge race began to seem like less and less of a good idea. The heat getting more intense was definitely a big factor. Boy did it get warm! I was dumping water over my head at every water stop.

Somehow, I made it to the final bridge. Otherwise known as the “Green Monster” of the Gate River Run. It was a rough one for sure, but I made it up and over. I conquered that Monster! And, when I saw that finish line not long after getting over the bridge, I was incredibly relieved. This was a tough race and I hadn’t given up. I got it done. Maybe not in the amount of time I would have liked, but I did it. In the end, that was all that really mattered, finishing.

I WILL be back to better that time. If not in 2016, most definitely in 2017. That Green Monster hasn’t seen the last of this Orlando runner girl. 🙂 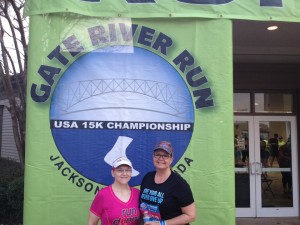