I know what you’re thinking, a half marathon in June in Florida? Yes, it’s crazy. If you thought running a half marathon was crazy, it has to be even nutter to run one in the heat and humidity of the Sunshine State. But, that’s just what I did yesterday at the Echo Half Marathon. 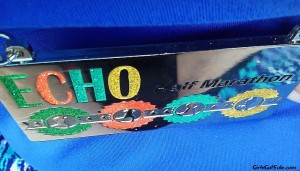 There’s a back story on how this nuttiness came about. You’d have to get into your time machine (preferably a Delorean, because honestly, that’s the coolest way to go back in time) to October 2014. This is when the idea to register for said race happened. My running group is awesome, and my second family, but we can all be quite persuasive with one another when it comes to races. The word was, it was just $30 to sign up for this half marathon that was going to take place in June 2015. The price was hard to beat that was for sure. So, myself and a number of other fellow sucker runner friends all drank the kool-aid and registered. Here it was eight months later and summer time, to which the events of that October day went into question in my mind.

Back when I registered late last year, I also didn’t know that I would be running the NYC Marathon this year. So, now I’m on a training schedule for New York, which is pushing anything else onto the back burner. Schedule called for 9 miles, so after checking in with Coach Jeff Galloway, I decided I would run the first 9 or 10 miles of the race and then walk the remainder. Seemed like a smart plan and one that I could handle no problem. 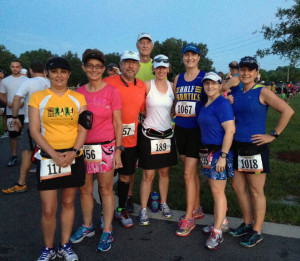 Some of the group pre-race.

Race morning, I got up and dressed then drove over to friend Meg’s place and we carpooled over to DeBary where the Echo Half Marathon was being held. It’s not too far from Orlando (about 30 minutes), so that was a plus. We got there about an hour before start time, so we had plenty of time to park and find our fellow Orlando Galloway friends as well as take care of pre-race port-o-let breaks.

Once the race started, I ran with runner friend, Connie. We stayed toward the back since I had no time goals as it was a training run for me, and she wasn’t looking for a particular time either. We set our GymBoss Timers for 30:30 intervals and were off. I felt pretty good as we got going. The first three miles seemed to fly by as we talked and just enjoyed the scenery. It’s always nice when you run with friends because the miles truly do seem to go by more quickly.

The next three miles, from 3 to 6 came a bit harder. I was developing a headache. That coupled with the humidity starting to get to me a bit had me working harder to keep moving. When I stopped at a port-o-let at the 6 mile mark, Connie kept walking and I thought I would catch up to her. I poured water on my head and got moving again after my brief restroom break. I never did catch up to her though. I saw her ahead of me as I hit the 10k mile marker, but with my throbbing head and all, I got further behind. 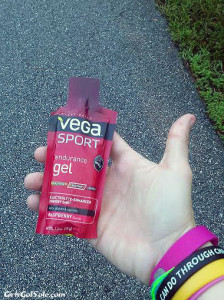 Vega gel on the course. It truly did help me through some of my hard patches!

At every water stop, I poured water on myself and on the inside of my visor in an effort to stay cooler and calm my head down. Miles 6.2 to 9 were tough. I knew once I hit mile 8 that I was going to slow down after I hit the mile 9 marker and walk it in. The heat was getting to me. I tried to distract my mind by thinking of other things, looking around the area I was running, anything. It was at that moment that I wished I could catch up with my running buddy and not be solo. While running alone can be good for you, I have come to really prefer running with others. I do think being alone can make you stronger in the end though. It’s just not something I think about while I’m out there running alone during a rough patch.

That mile 9 mile marker was a great sight when I spotted it. I was at my mileage goal for my marathon training and from that point forward, I didn’t have to run anymore. Did I wish I was done? Oh for sure I did. I would have preferred it was a regular training run back in Winter Park with my group and I was back at my car and done for the day. But, I wasn’t on a regular training run. I was out there running a half marathon in DeBary. So, my choices were clear. I could keep moving onward and get the remaining 4.1 miles done, or I could stop and DNF. While the latter choice did seem like a pretty good idea for a bit as I walked, I told myself I was strong and I could get this race done. 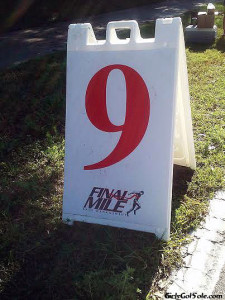 Glorious mile 9. It was so great to see that mile marker.

Somehow, through the numerous mental distractions I gave myself during those final miles, I pushed through. I even felt a bit better for the last mile or so. I think pushing yourself through challenges makes you a stronger person and runner. We are capable of so much physically, that we just have to get through times that are challenging. Not every run or race is going to be awesome. It’s just not going to happen. Sure, it would be nice if I could go out there and enjoy every mile I get through, I know I am just not going to. There are so many factors that determine how a run goes.

The funny thing is, I even called into my favorite podcast, The Extra Mile Podcast as I walked along and gave a training/race report from the race course. That kept my mind busy for a few minutes and was fun. I don’t know exactly what I said on the call, but I’m sure it will be interesting. 🙂 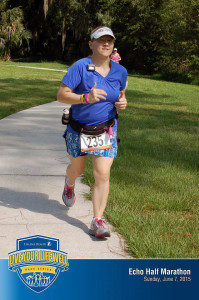 This is toward the end, yes I ran a bit, I mean isn’t that the rule when you see a photographer? 🙂

When I finally turned the corner and spotted the finish line, that glorious finish line, my walking turned into a sprint. No matter how I’ve felt at a race, there’s always something about that finish line. I just want to finish the race strong and that means running it in. It felt so good to cross the finish line and get it done. It was also great seeing my friend there at the finish cheering me in.

It was a tough 13.1 miles out in the heat, but I got it done. I started the race and finished. That really is the most important thing. That you do your best and get it done. Will I run this race again next year? Probably not. That’s not because the race itself was bad, on the contrary. In fact the course was beautiful and the volunteers were just wonderful out there. I just think it’s a bad time of year for a half marathon. I will have to get long miles in for NY, but I’ll be doing them as early as possible.