↓
Home Menu ↓
Home→Blogging→Putting It Into Words

Sometimes, words just can’t seem to accurately describe an experience. There are over a million words in the English language, yet I still feel no combination of them can fully explain all of the feelings and emotions felt during the 2015 26.2 with Donna marathon weekend. With that said, I am going to try my best to relay in this blog post the incredible three days I had in Jacksonville. I’m going to preface by saying that there will be multiple blog posts about the weekend, especially one just about race day itself. 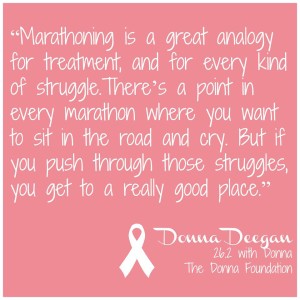 LOVE this quote from Donna!

The 26.2 with Donna marathon weekend is a race like no other. Yes, I know, I’ve said that before, more than half a dozen times I’m sure. That will be something I will never stop saying or yelling from the rooftops. If you can sign up for this race, run or walk it, and have it not change you, please raise your hand. Not one person that I’ve met in the last three years of running the DONNA has been able to do so. It’s true that every finish line can change you, but the DONNA, its sea of pink is full of heart. The faith, courage and strength to finish breast cancer.

In it’s 8th year, this race that started so small back in 2005 with the idea to create a marathon to end breast cancer has evolved into becoming an event that has touched so many. To date, the 26.2 with Donna marathon has contributed more than $3.5 million toward finding a cure to finish breast cancer. Not to mention the thousands of survivors it has assisted through The Donna Foundation.

Friday morning began with a way too early wake up call from my alarm clock. To be fair, I have seen earlier digits on that same clock during the weeks of marathon training. With my little car packed up and DONNA gear on, I hit the interstate toward north Florida. Being a race ambassador for the 26.2 with Donna, I am blessed with so many opportunities, the Friday morning shakeout run being one of them. It is a three mile run through Neptune Beach neighborhoods with folks like Joan Benoit Samuelson, Jeff Galloway, Dave McGuillary, Donna Deegan and of course a couple dozen other great runners present for race weekend.

I can’t imagine beginning the DONNA marathon weekend any other way. It was a time of socializing, getting to know people that you had only talked with previously online as well as meeting new people. With hot coffee, muffins and running mixed in, it truly was an awesome start to marathon weekend. Oh, and getting on live television behind the amazing Donna Deegan didn’t hurt either. 😉

Following that, the race expo doors opened a couple of hours later. Having been to the DONNA expo twice before, walking inside always puts a smile on my face. It still is my favorite race expo, hands down. From the moment you go under the pink entrance, you are greeted with many welcoming smiles. Not to mention some nice freebies (thanks to all the vendors who make that possible!). Vendors that line the rows at the expo include Publix, Genentech, Dunkin Donuts, Athena, Peterbrooke Chocolatier, Fitletic, 1st Place Sports, Celgene and more. I was especially glad to see Skirt Sports, Bondiband, SQOOSH and Team 413 in attendance.

Before picking up my race packet, I had the opportunity to interview Jeff Galloway along side fellow ambassador, Dawn Lisenby not long after the expo doors opened. The two of us were able to whisk Jeff away from the expo floor for about 30 minutes of his time. This one-on-one time with the Olympian allowed us to ask Jeff just about anything. As a member of his Galloway training program, I have been fortunate to have had multiple encounters with Jeff and have been able to consult with him on just about every point in my running journey. Dawn and I ended up taking this little meetup time onto a different path of sorts. I asked him about his life prior to being the run-walk-run training coach we all have come to know and love today. For example, did you know Jeff served our country in the US Navy for three years? The stories Jeff has to tell stem far beyond the realm of running injury-free. Stay tuned for a blog post on our time chatting with him.

That evening, we had a VIP Cocktail Party Reception at the nearby One Ocean resort. Having attended the reception last year, I knew it would be a great evening. Most of the DONNA Ambassadors were in attendance. The hotel puts out a great variety of food, including appetizers and snacks. There is also an open bar available. I go for the socialization and time spent with great people. It’s about having great conversations with one another and connecting on a level outside of running. Though, it is running and the desire to finish breast cancer that brought us all to that place. 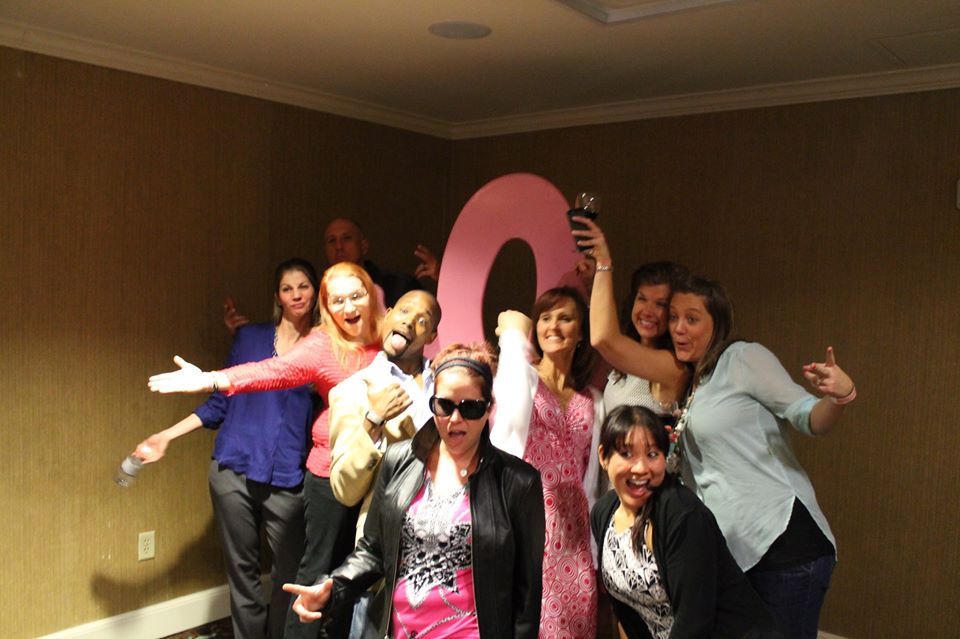 DONNA Ambassadors having some fun at the cocktail party

On Saturday, it’s day two of the expo and the day of the Family Fun Run 5k. I opted not to run it this year since I was doing the full marathon. I did have a blast running it in 2014, so I know I will definitely be running the 5k again, likely in 2016. After the long day I had on Friday, I took the opportunity to sleep in a bit that morning while my room-mate and fellow ambassadors ran the 5k. It isn’t often I get the chance to sleep in on a Saturday, as that’s when I am usually up early for a long run. Once I did get to the expo, I spent some time with vendor friends chatting about this and that. Also did a bit of last minute nutrition shopping (Gu Caramel Macchiano was found!) and then headed back to the hotel with Holly to relax a bit before our evening at the Mayo Clinic.

Being an Ambassador for the 26.2 with Donna gave me the amazing opportunity to attend a Fundraising Dinner Saturday night at Mayo Clinic. Beforehand, those of us interested were able to take a tour of the research floor which has been completely funded because of the DONNA. It’s because of every runner, every donation received through the 26.2 with Donna that top of the line research to finish breast cancer is being done right there in Jacksonville. Seeing firsthand with my own eyes and listening to the research team talk about the great strides they have been able to make in finding a cure is just amazing. There truly isn’t anything like seeing what your donated dollars are doing to make you want to get out there and tell everyone who will listen how awesome this cause is. It inspired me even more to tell each and every person that I can about the things Mayo Clinic is able to do because of the 26.2 with Donna.

After the tour, we gathered and mingled before a wonderful dinner created by Mayo. That pasta dinner was so good, those folks definitely aided in carbing up the marathon runners for Sunday’s big race. Major kudos to the folks at Mayo Clinic who put that together, it was so great. 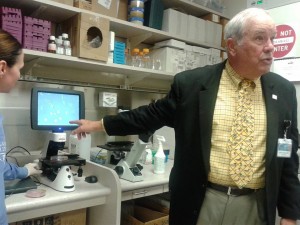 Tour of the research labs, showing us cancer cells.

To finish out the evening, we got to hear from Donna Deegan and Dr. Edith Perez. After reading so much about Dr. Perez and seeing her speak via online videos, hearing her speak in person about finishing breast cancer was nice. What was even better, what made the evening special however, was the last person we got to hear from that evening. We were introduced to a breast cancer survivor who has been a recipient of The Donna Foundation. Michele found out she had breast cancer and it turned her life upside-down. Just like most of us, Michele doesn’t have much to her name and lives paycheck to paycheck for the most part. When she discovered that she had to pay a large amount of money as a copay the day before she could get the cancer removed from her body, she was devastated. As if it isn’t hard enough that she had to deal with having cancer in and of itself, but the money aspect added yet another worry and stress onto her life. How would she pay to get the surgery? Furthermore, what about her bills and mortgage payment during all of this? Michele took a chance and wrote a letter to The Donna Foundation, not putting much hope that they could help her financial situation. That all changed with one phone call. The Donna Foundation was able to take the financial burdens off of Michele’s shoulders so that she could just get the surgery and get better.

Michele’s story brought tears to my eyes. She is just one of the thousands of reasons why I run DONNA. You may think your few dollars won’t make a difference, but it does, it TRULY DOES. I walked out of that dinner more empowered and inspired than ever for the 26.2 miles that I would be facing the next morning. What the 26.2 with Donna has done and continues to do is just amazing. I fully believe that God introduced me to this race, this cause, these people to me just over two years ago for a reason. That reason is to be a voice, even if that is a small one for the survivors. I dream that one day a cure will be found, and that cure will come out of the blood, sweat and tears that has been given through the 26.2 with Donna.