↓
Home Menu ↓
Home→Featured→Pushing Through The Rough 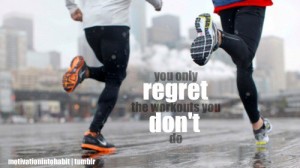 Yesterday, I had my roughest run to date. The goal when I headed out the door was to do 8 miles as that’s what I’m up to for my half marathon training. I knew that it was cold outside, but figured if I could get through the first mile or so, I’d be good to go. Boy was I wrong.

After hitting about a mile in, I wasn’t feeling too bad. At this point, I was running on a main road and usually, this is one of the tougher parts since it’s all sidewalk. I had my music going and kept thinking positively. As I rounded the corner about a half mile later, I came into some heavier winds that began to test my stamina. I pushed on, hoping that better miles were to come.

When I got to the nearby college campus a mile and a half later, I was still in fairly good spirits. I usually make a pit stop here since there aren’t many options in the neighborhood to do so. A few minutes later, I was back out the door. This is where things began to get ugly. The winds seemed to have picked up even more, and it was colder now that it was before. Not good, I thought as I found a good motivating song on my playlist. Running down the street, I felt tired from the wind hitting me in the face. It was almost as if the cold wind was beating me up and I was struggling just to stay up and avoid the blows. I’m not a fan of headwinds, especially cold ones at all. Usually, this is more of an issue when I’m cycling, but it can be just as bad when you are running or walking.

I was having a really difficult time keeping my positivity up. Part of me wanted to keep going, knowing that I had to do 8 miles for my training. I don’t like to give up or not achieve the goal I set out to do. The other part of me, wanted so badly to stop and just take the miles that I had done and call it a day. Under normal circumstances, that first part, the one that is the strong-willed one wins. I’ve been through a lot with my weight loss and back injury and didn’t get where I am now by throwing in the towel. The problem was, that strong-willed girl was feeling extremely defeated, cold and uncomfortable. I struggled with the decision to end my run early up until I was almost back home. Once I saw my street, I ran right down to it.

I’m not proud or happy with myself for not going the remaining 2 1/2 miles to my goal, but a little over 24 hours later, I have allowed myself to accept it. Not every workout is going to be a total success. Just getting my butt out the door is a great thing. I mean, how many people just give up before they set a foot out their front door? Sadly, a lot. Heck, I used to be that way. We need to allow ourselves to have days where our run just doesn’t go as planned. We’re not perfect by any means. I am turning this around to be a learning experience. Not only for strengthening my mentality when I run (currently reading Jeff Galloway’s Mental Training for Runners book), but for educating myself on getting the gear I need for all sorts of situations. If I would have had a windbreaker and a neck gaitor, that would have likely been a big help in coping with the wind. It comes down to learning and getting back up to do it again tomorrow, no matter how much you might want to hide underneath your warm covers when it’s 40 degrees outside. 🙂

I selected this post to be featured on www.runningblogs.org. Please visit the site and vote for my blog!
Tweet