Last weekend, I went down to the Disney Marathon Expo to check out the fun runner “goodies” that might be available there. After standing in line for a bit to meet Jeff Galloway which was a great experience, I wandered the rows in the hall. I looked at all sorts of things from tech shirts to lights. What I was hoping to find was a good handheld water bottle and a running belt that wouldn’t bounce with my cell phone in it when I run. 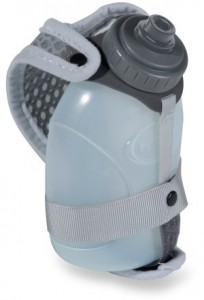 Originally, I was going to buy a Fuelbelt Sprint handheld bottle, but at the expo, I spotted the Nathan products and two guys sold me on the handhelds. The bottle holds 10oz and is adjustable on your hand. You don’t even have to really hold it when you run as it stays in place with the strap. It was a bit higher cost than the Fuelbelt one, but I was impressed enough to give it a go. After running with it now for almost a week, I like the bottle overall. It stays in place without any fuss and I can even put my house key in the strap’s pocket. It’s not really bulky which is also a plus. My only negative about it is that when my hand gets sweaty, so does the bottle. Of course, that’s pretty likely to happen with any bottle I’d guess. I will likely eventually try an insulated one this summer as Nathan does make those handhelds as well.

I’ve been doing some hunting for running belts as of late as well since my Fuelbelt one bounces all over the place and drives me bananas. It was okay when I was just walking, but now that I’m back to running, it just doesn’t work for me. I heard a lot of good things about Spibelt and still hope to get one of their belts, but at the Disney expo, Hippie Runner’s belt caught my eye. Not only did it resemble the Spibelt in design, but it had loops for gels on each side of the pocket. And, the colors the company had available were great. So, I debated for a bit, but the Hippie belt won me over at least at the expo. I have to say, I’m pretty happy with it too. It’s been on three runs with me and no bounce! That alone makes me one happy runner girl. No negatives on it at this point since it does the job and stays put.