Disclaimer: I was provided packets of various flavors of the new formula of Vega’s Vega One protein powder in exchange for reviewing the product on my blog. No other compensation was received and opinions are my own.

Let’s get things right out in the open, shall we? I have come to really love Vega products since becoming a vegan. I’ve been using them now for almost four years now. The Vega Sport line has been my primary favorite, as I’ve used it 95% of the time since I’m an endurance athlete. I use Vega Sport in chocolate after every run and workout as my recovery drink.

That said, Vega One while obviously still a Vega product, is one I’m less familiar with. I do recall using it in the past, and while it was good stuff, it was a bit gritter in taste in my opinion compared to the Sport line protein shake. When my friends at Vega offered to let me try the new Vega One formula, I was all for it. I was curious to see how it compared to the Vega Sport. 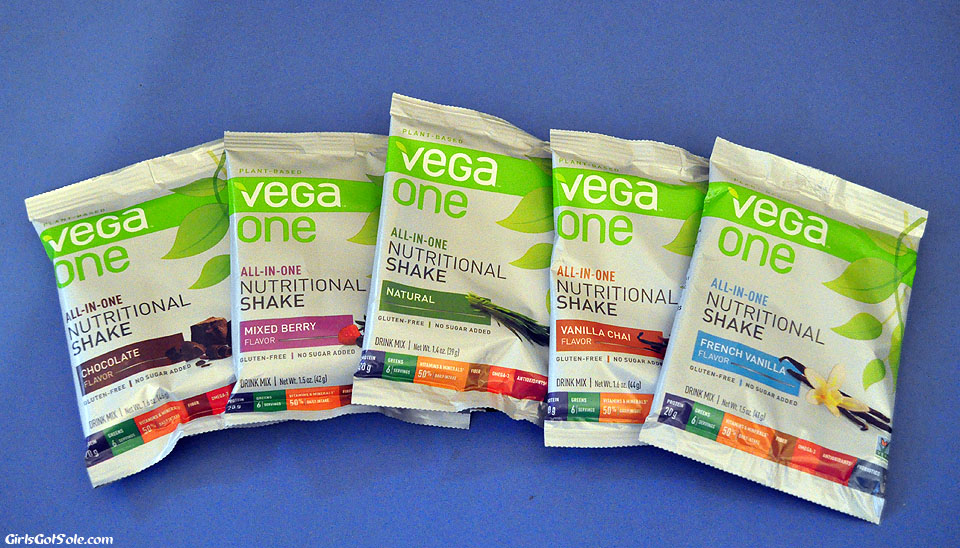 I received Vega One in Chocolate, Mixed Berry, French Vanilla, Vanilla Chai and Natural. While I was anxious to try the Chocolate, I actually had the Vanilla Chai first. I mixed it with 12oz of water (you can use almond milk, etc if you desire instead), and right away I noticed the color. It’s green, very green. This would have intimidated the me of the past, the person I was before becoming healthy and vegan, but it did no such thing now. I admired how healthy that green color looked. I mean hey, green is good! 🙂

Now, for the taste. Taking my first sips of the Vanilla Chai shake, the flavors immediately came out. The vanilla and chai was recognizable right off. It was also a smooth taste. Nothing gritty about the new Vega One! It didn’t take long for me to finish all 12oz of that nutrition shake. By the time I was done, I knew I was very impressed with it. That feeling continued when I tried the Chocolate, French Vanilla and Mixed Berry. I will say that as a person that loves flavor, the Natural is perfect for adding in your favorite fruits or other add-ins. I can’t see myself drinking it as is, but there are so many possibilities with it for creating drinks. 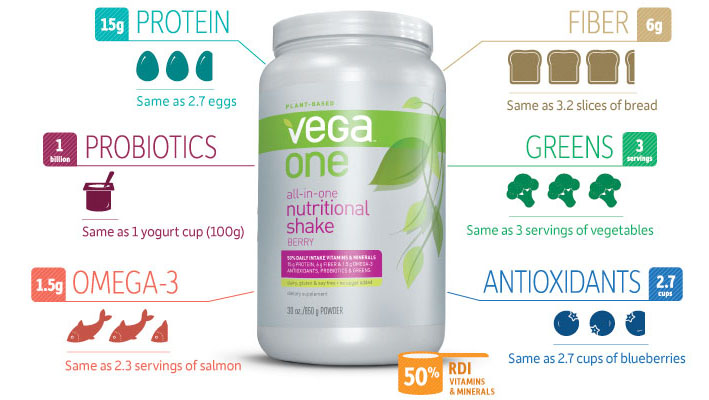 Each serving of Vega One contains 20 grams of premium plant-based protein that includes a 50% daily intake of food-based vitamins and minerals. There are six servings of greens with each scoop of protein powder. Not to mention antioxidants and 1 billion CFU of probiotics. Throw in 1.5 grams of omega-3s, 25% daily intake of fiber all well under 200 calories, and you have a an amazing nutritional shake like no other!

You can take Vega One as a meal replacement (check out some recipes here), or just as a healthy anytime snack. It’s a drink you can easily take on the go and feel good about putting into your body. You won’t feel “weighed down” with Vega One and it’s gluten-free!

The new Vega One has more protein that it’s predecessor, more organic ingredients including 75% North American ingredients. Every ingredient is made from real, whole foods. It’s greener than ever due to double the amount of greens.

If you are looking for a great tasting, whole food nutritional shake, definitely check out Vega One. You can buy it at Whole Foods as well as most natural food stores and online through MyVega.com