Disclaimer: I received an Orange Mud HydraQuiver as part of being a BibRave Pro. No other compensation was received, and all opinions stated are my own. Learn more about becoming a BibRave Pro (ambassador), and check out BibRave.com to review find and write race reviews! 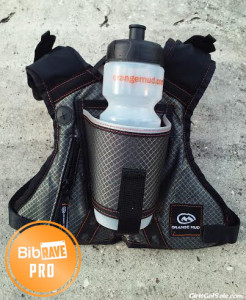 Orange Mud. It’s become one of the most known companies for high-quality hydration packs for athletes. Their philosophy is very simple, make the most efficient, well crafted, locally sourced gear. The HydraQuiver is the flag ship hydration pack series. There are four different types currently in the line. As a BibRave Pro, I was able to review the single-barrel HydraQuiver pack.

The HydraQuiver is hydration pack that holds a single 25oz water bottle. The pack has thick foam padding and big air channels which help provide ample support and maximum breath-ability. There is also storage that allow you to store your phone as well as nutrition. In addition, there is a headphone port and a reflective logo for visibility in low-light situations.

My thoughts on the HydraQuiver pack are now that I really do like using it on runs. My first run with it was during a 5 mile trail race, and I immediately felt awkward wearing it. As someone who has never worn a hydration pack, it was just odd for me. I’ve trained wearing hydration belts and using handhelds for the last four years. Having something on my back just didn’t feel “normal.” By the end of the five miles though, less for some sloshing of the water in the bottle, I began to kind of like the hydration pack. 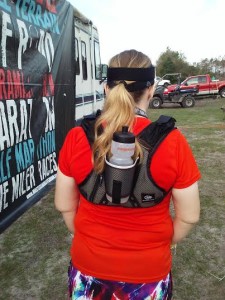 By the second run with it, during a 6 mile training run with my group, I found myself pretty fond of the pack. It was growing on me! No longer did it feel awkward to wear on my back, in fact I liked not having to hold a handheld bottle or wear a hydration belt. It freed up both my hands and I didn’t have the load of a belt around my waist. Oh, and no chafing issues what-so-ever! That’s always a plus (say no to chafing)!

I’ve since worn it a few more times and I can definitely see myself using my HydraQuiver pack during my upcoming training season as well as during some races. It’s a good alternative to a hydration belt and keeps my hands free which is a big plus in my book. I never thought I would be a fan of a hydration pack worn on my back, but the HydraQuiver is light at just 10oz with the bottle and you barely know it’s there once you get used to it.

Check out the Orange Mud HydraQuiver as well as the other hydration packs they have on their website. This may just be the solution you are looking for to stay well-hydrated as you are out there training for your next race.

**Don’t miss the Twitter #BibChat on May 3rd at 9pm Eastern. Orange Mud is the sponsor, and there will likely be a giveaway or two! You don’t want to miss the fun!** 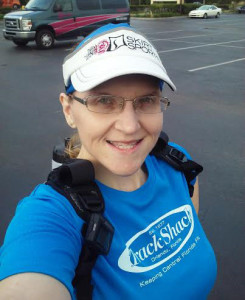 Do you use a hydration pack when you run? If not, how do you stay hydrated?