Note: I purchased Generation UCAN on my own dime, without any compensation from the folks at UCAN. I was not approached to review the product. This blog post contains my personal thoughts.

I had heard the ravings from many a runner friend. “Oh, you’ve GOT to try UCAN, it’s amazing!” they would tell me, obviously completely sold on the product. This constant urging from runner friends I trust had me curious about the stuff. Just what was this Generation UCAN?

Heading over to the company’s website, I learned a lot. UCAN’s SuperStarch is a natural, slow-releasing carbohydrate that keeps blood sugar stable and delivers steady energy for your brain and body. The key is sustaining your blood sugar to maintain your energy, allowing you to perform at your best. UCAN prevents the spike and crash of sugar-based fuels while being gentle on the stomach.

UCAN all started with a boy named Jonah, the founder’s son. Jonah has a life-threatening hypoglycemia condition that required him to be fed every 2 hours in order to maintain normal blood sugar levels. Aggressive research discovered SuperStarch, which has now become an amazing fueling product for endurance athletes as well. UCAN is a form of natural energy, non-GMO, low gylcemic and gluten free. 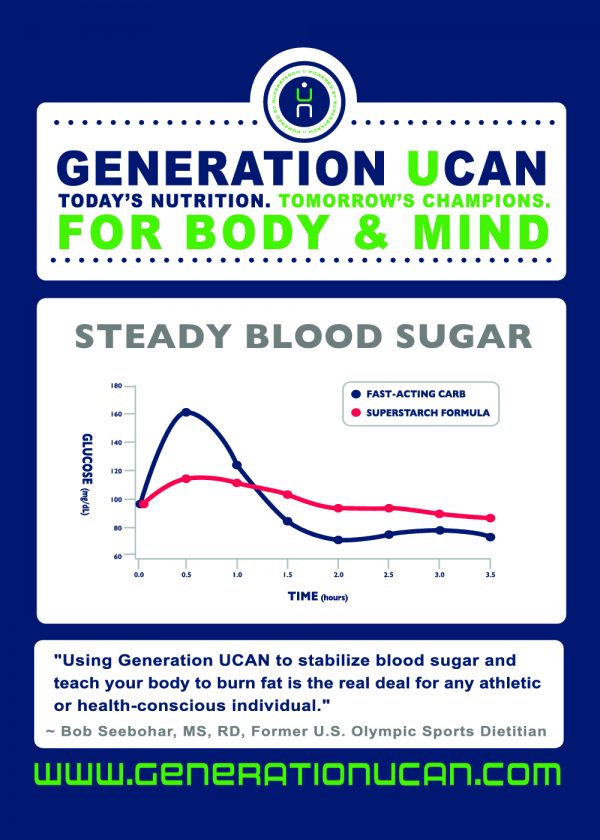 I first tried UCAN on my 12 mile training run. The evening before, I mixed up a bottle from a single-use packet I picked up from my local running store and chilled it in the fridge overnight. On my run, I sipped on the UCAN and found myself feeling amazingly good and not really hungry or feeling depleted. I did end up taking a gel in the last 3-4 miles of that run, and discovered that changed things with the UCAN. I finished the run still feeling good, but was pretty hungry by the last mile. I later learned that mixing UCAN with another form of sugar is a no-no. It has to do with mixing the two different forms of fuel and that basically cancels out the UCAN.

When I wrote to the folks at UCAN about it, here’s what I learned: “We do not recommend mixing UCAN and sugar based products. Once you let UCAN run its course of 90 minutes to 2 hours, totally fine to switch to sugar, but then you want to stay with sugar.” So, it explained a lot for me about my change in feeling a bit different after that gel.

I was so sold on how I did feel and how great my energy was on that 12-miler, that I went to the running store and bought a tub of UCAN. This time, I was using it for my 14 mile marathon training run. And now, I knew that taking a serving about 30 minutes BEFORE my run and then sipping on another serving DURING my run was the best way to go. 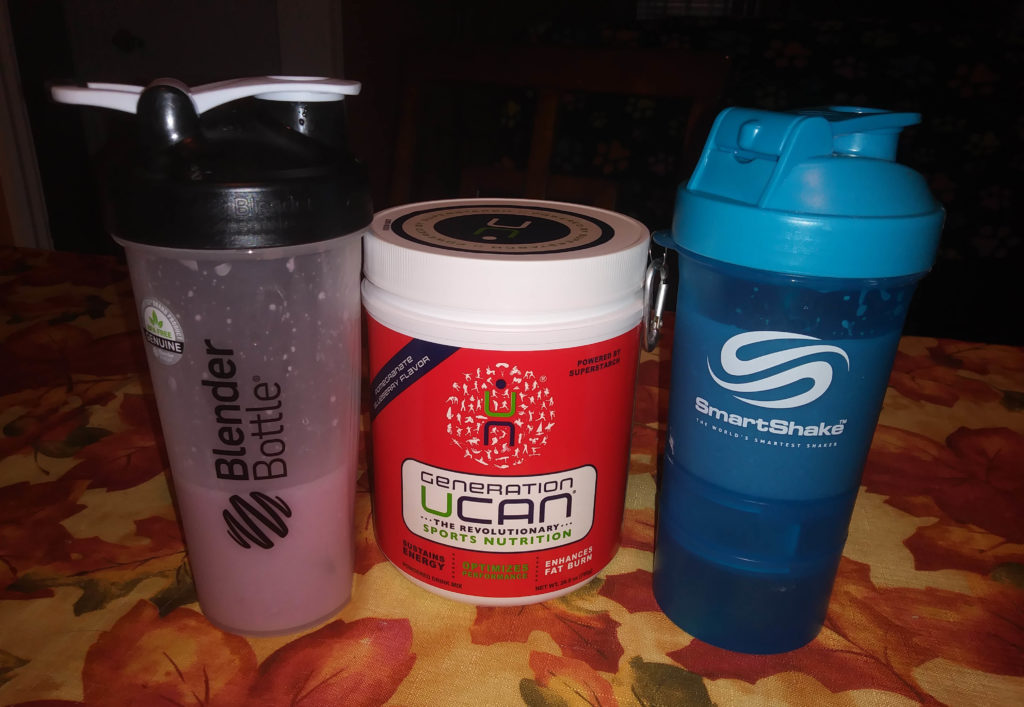 The night before my 14 mile long run, I mixed up two bottle of UCAN. One bottle was for drinking on my drive to my run the next morning. The second, I put in a scoop and a half of UCAN and would use it during the run. I filled up my fuel belt bottle with UCAN when I started my run, and then sipped it through the first 6 miles. We returned to our starting point before heading back out for the last 8 miles, so that allowed me to refill my belt bottle with the remaining UCAN I had in the car (I mixed about 14oz of water initially in that shaker bottle).

On this long run, the only other nutrition I added was half of a Bonk Breaker bar. Since I do get a bit hungry on the longer runs, I knew I should carry something. It was during the second portion of my run that I ate that, around mile 9. I found myself feeling great (well, less for the heat LOL), and I loved how balanced and all UCAN made me feel. Didn’t feel like I needed all kinds of sugar like I would previously do on a long run or half/marathon distance. 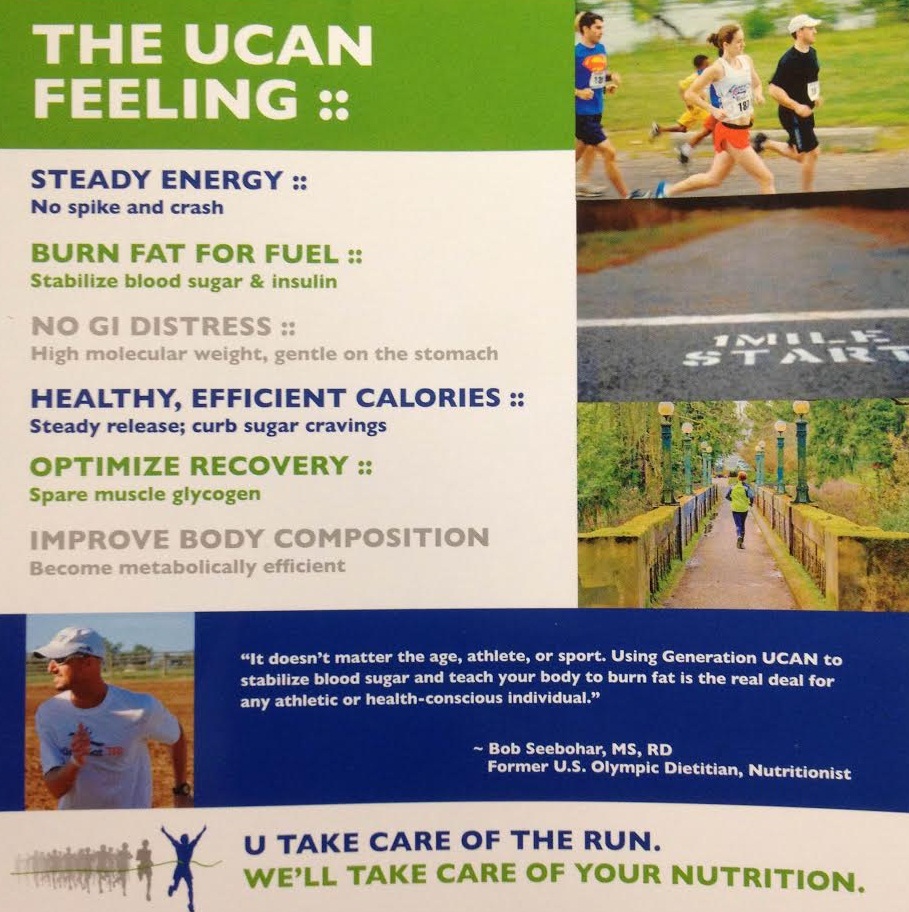 Going forward, I plan on using UCAN on all of my long marathon training runs. I just bought some UCAN snack bars, so that I can use that on a run if I need to munch on something. So, I am definitely sold on the product, and I love it. As a back-of-the-packer, I don’t think I can or will use it during the NYC Marathon later this year. I don’t think dealing with it will be something I can do out there for 5+ hours. So, thinking I will likely use it as a pre-run fuel and then maybe initially in my bottle. That said, I look forward to giving it a try as my only fuel during my next half marathon later this year.

Have you tried Generation UCAN? What do you think?