As a BibRave Pro, I’m fortunate to be able to try out some really neat running products. The UV BUFF is the most recent product I’ve been able to try. The last few years, I’ve been all about my favorite headband made by Bondiband, and nothing else. While I still love Bondiband, I’m now branching out to check out other kinds of headbands and things. 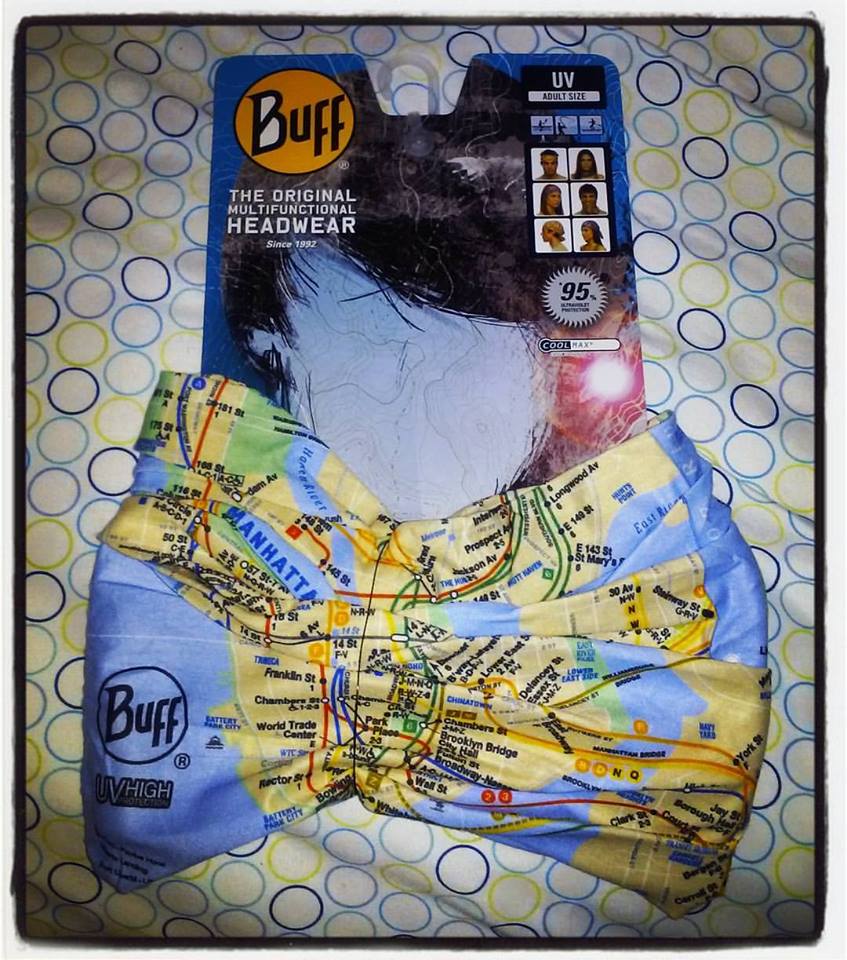 The BUFF is so much more than a headband of course. It has many ways to wear it depending upon both your style and what you might need it for. There are at least 12 ways to wear an original BUFF. Who knows what a creative-minded athlete might be able to do with one?! That said, the possibilities could very well be endless. 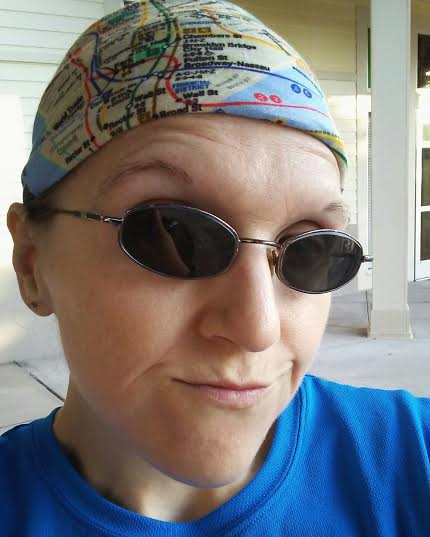 My UV BUFF kept me cooler on this 10k run.

If you happen to be unfamiliar with BUFF, the company invented the tubular head-wear category more than 20 years ago. That Original BUFF product has since progressed into the latest line including technical fabric innovations that athletes and outdoor enthusiasts can trust. The company strives in remaining true to their heritage of quality and craftsmanship in every product they produce.

I love the many design options out there for BUFF’s UV line. Having to choose just one was definitely a challenge, especially since I’m all about matching my accessories. When I saw that BUFF has a NYC Subway UV BUFF, I immediately knew it had to be mine. Having just run my dream race at the 2015 NYC Marathon, I’m still on my NY kick. When the BUFF arrived, I was thrilled with how awesome it was. The design is just like looking at a NYC subway map and the material of the BUFF is extremely well-made. 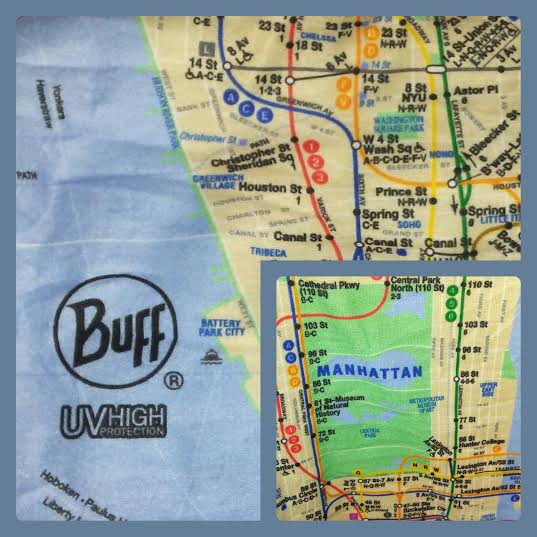 The detail on the NYC Subway map is so awesome.

So far, I’ve worn it on a few runs as a headband. Here in Florida, it’s likely to be the most-used method in the icky humidity. Once I get it on and set how I like it on my head, it stays in place and it’s comfortable. I don’t feel it after wearing it a bit and I do believe it keeps me cooler while I’m out there running. Even when I wear a visor, I always have a headband on underneath, so a headband has just become a must for me as a runner. What’s so great about the UV BUFF is that it blocks 95% of the sun’s UV rays which is big for us here in the Sunshine State!

My other favorite ways to use my BUFF are as a wristband and as a neckerchief. I haven’t tried the hat liner method of wearing it yet, but I’m going to do it for sure soon, as I think that will work out great. I also look forward to wearing my BUFF as I get more into trail running and when I do run in cooler weather when I can use it as a neck gator or face mask. I also recently got a BibRave BUFF, so if you follow me on Instagram or Twitter, you will most definitely see some of my summer running photos wearing the BUFFs. 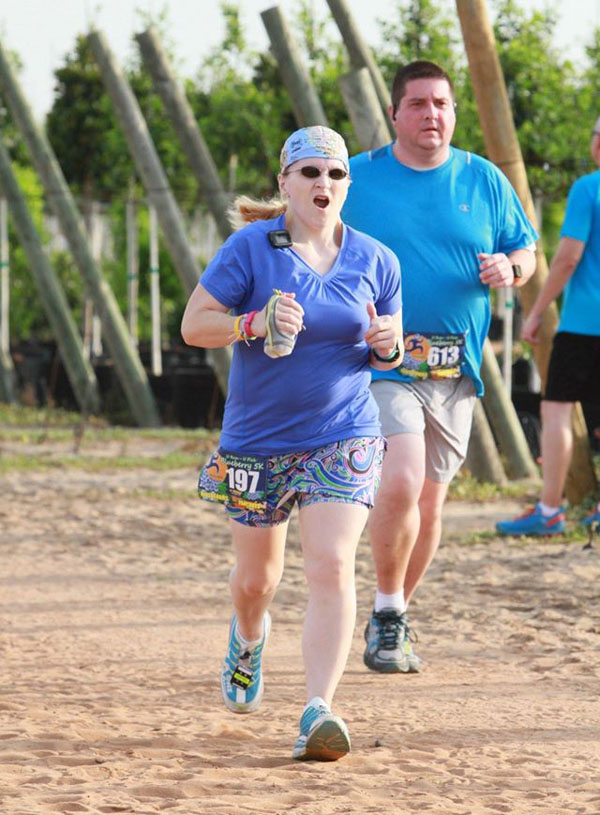 Rocking the UV BUFF at a local 5k.

Be sure to join this Tuesday’s #bibchat on Twitter, sponsored by BUFF! The chat takes place on May 17th at 9pm Eastern. Make sure to follow @BibRave and @BUFF_USA and participate to possibly win a BUFF of your own! 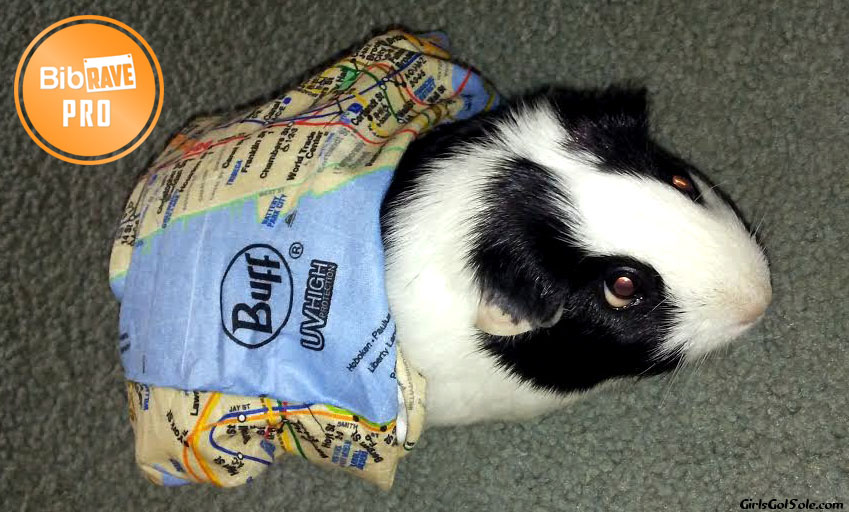