↓
Home Menu ↓
Home→Cycling→Pedaling along the Trail

On Sunday, I decided to join in on a bike ride on the Seminole-Wekiva Trail. I had never ridden or been to the trail, so it sounded like a nice little â€œadventure.â€ This ride was organized through a local group called Letâ€™s Roll, Bike Rides. I have been a member of the online group for a couple of months or so now, but never made it out to a ride. 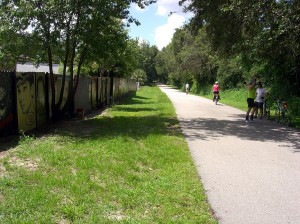 After packing up my bike on my carâ€™s bike rack and getting ready, I was off to the trail. After having a bit of an issue finding the trailhead, I finally parked and unloaded my bike. Thankfully, I didnâ€™t miss the group due to arriving a bit late and met them near the beginning of the trail. There were four others besides myself, two of which were the organizers of the group.

One thing I noticed right away was that the trail was pretty shaded through a good portion of it which was definitely nice with the Florida heat. We even got a bit of a breeze a couple of times which was nice. I felt pretty good at the start, but after 4-5 miles I could definitely feel a bit of exhaustion. I havenâ€™t been biking for distance much lately and it became pretty obvious at that point. But, Iâ€™m not one to give up, so after a minute or two of a water stop break, we were off again.

The Seminole-Wekiva Trail is definitely a nice one. I really did enjoy it, especially the tunnel we passed through and most of all, the trail fence art. Talk about inspiring and awesome, itâ€™s definitely a sight to see. You can really see the love that the artists put into the panels that they do for the fencing. I loved looking at them and wished I had more time to really check them out. This of course means that I’ll be going back soon. 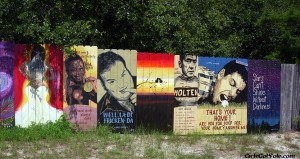 After reaching the Lake Mary area, we turned around and headed back. On the ride back, I spotted a large turtle on the side of the trail. I later regretted not going back for a picture (the photographer and blogger in me wanted to get a photo). One of the girls also spotted a small snake. Iâ€™m sure thereâ€™s all sorts of reptiles and such around the trail since itâ€™s surrounded by a lot of wooded areas. I can do without the snakes though. 🙂 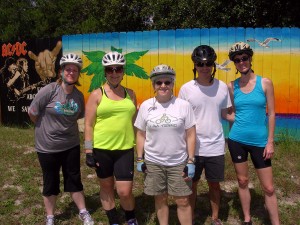 The ride was 15 miles in total. Probably my longest ride in quite a long time. Usually, my longest rides are with the First Friday rides. I really do need to get my cycling stamina up. Maybe some more road-friendly tires would help too.