This morning I took on my longest training run of 23 miles and finished it strong. It’s amazing and awesome how far I’ve come since starting my Galloway marathon training back in June. I feel as though I’m a better and smarter runner now. 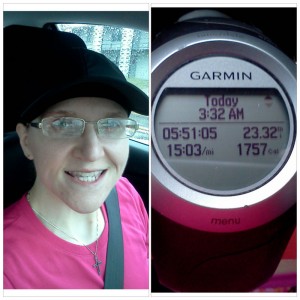 23 miles done with a smile still on my face 🙂

This morning, I woke up before 2:30am to get going for my 3:30am run. I had some stomach issues right off the bat and began to get concerned that I wouldn’t be able to run at all. Thankfully, after taking something, my stomach calmed down enough for me to get dressed. I was out the door by 3am, a little later than I would have liked, but I knew I’d be okay with time (as I had to pick up ice and set up water/gatorade before I headed out to run).

Once at the school, I set up the water and all and at 3:30am, we were off and running. There were three of us starting off this early and we would be running 8 miles then heading back to the school to pick up the other runners at a quarter to 6am.

We did 30 second run intervals followed by a 1 minute walk. I thought this was a good way to start things off since I knew once we met up with the shorter mileage folks, it would be more difficult to keep the pace down. I was feeling pretty good, just a bit tired in the legs by mile 5. When we reached the school at 5:45am, I was still feeling pretty good overall.

With the addition of the “new” group, there were about a dozen of us at this point. We switched to 1:1 intervals and headed to a water stop 3 miles away. Things went pretty smoothly from here and I was feeling good. We then had a bit of a drizzling rain start which went away just about as quickly as it came. 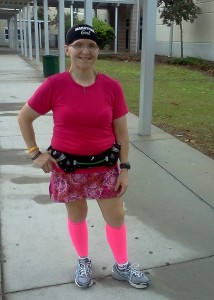 Again, the rain came down, this time a bit heavier than I would have liked, but it wasn’t a downpour, so that was a plus in my mind. The rain calmed again, but never completely went away as I finished up with a bit of a drizzle lingering a bit.

On this run, I noticed quite a difference from my 20-miler a few weeks ago. I felt a lot stronger and wasn’t experiencing the “lead legs” that I felt during the previous long run. I contribute the difference this time not only to getting the 20 mile run done, but to the compression sleeves I wore on this run. I think that helped my legs this time around. And, I added a couple of Ibuprofen around mile 12 today after a recommendation from one of my group leaders about using it.

I finished this run strong and felt as though I could have run more even though I was feeling it all over (especially my right foot). Made me feel so accomplished and really start to see that I can in fact do a marathon in a couple of months (I’m doing the 26.2 with Donna in February). 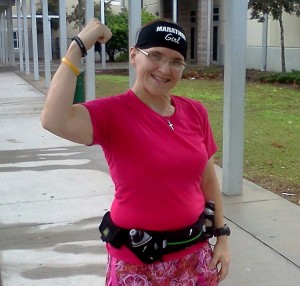