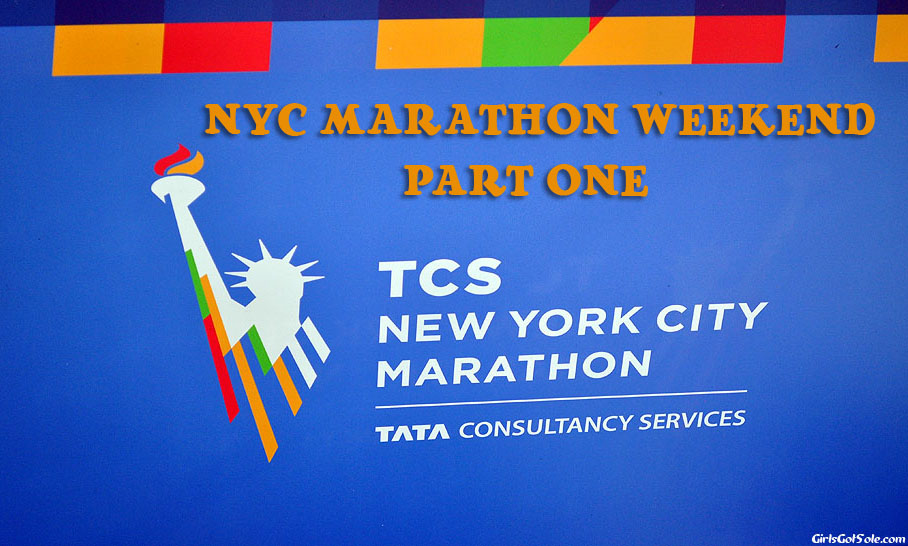 Here it is, part one of my dream race weekend in New York. It has taken a few days for me to let things sink in, to soak it all in. Oh, and to get through the worst of that post-marathon soreness. To say my quads, hamstrings and calves hated me would be an understatement. But, now that I’m through the worst of the DOMS, it’s time to get this weekend recap written. 🙂

On Thursday morning, my mom and I had a 7:50am flight out of Orlando. I stayed over my parents house the evening before so that my dad could take us to the airport (also, their place is closer to the Orlando airport). Once we arrived at the airport, we checked our bags in with the skycap and headed inside to go through security. I got through quickly and easily, though mom seemed to have to be wanded even after going through the body scanner (this would be something that was repeated when we were leaving NY oddly enough, guess she got chosen, luck her). After getting coffee and filling up my water bottle, it wasn’t long before we were able to board the plane. It was time to get this party started! 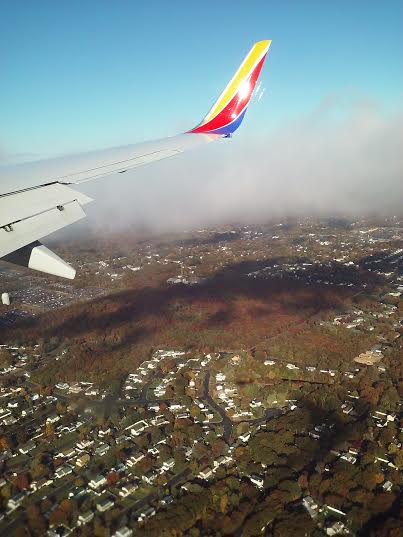 We arrived at McArthur Airport in Long Island a bit earlier than our anticipated arrival time. Southwest seems to have a good track record of early arrivals from my experience. We were staying with family on Long Island every night less for Saturday night before the race, that would be spent in a hotel in the city. One of my mom’s sisters picked us up and we found a place to eat. Then, we did some exploring of the area in which she and my mom had grown up. Mom was born in Patchogue, and that’s where we would be spending our time while on Long Island. It was nice seeing my mom’s childhood home and hearing about how some things have changed, or have yet to. I even got to see where my mom went to middle school!

When we got to my cousins house, we were introduced to the family. I hadn’t seen my cousin or her kids (funny how your cousins kids are still your cousins LOL) for about 6 years. Her family is the sweetest, her oldest is now 17 and a senior in high school, and the youngest, 14. They were the politest kids I’ve ever met. Lot of hugs and kind words were exchanged, not just on the first day, but all weekend long. I found myself wishing I could see this part of my family more often. I also got to meet all of the animals they have. There’s a dog, big fuzzy bunny and lots of chickens! They raise chickens, so they have their own eggs. The chickens are a part of the family, each one has a name and they frequently get to run around their big backyard. That evening, we went to dinner at a local restaurant, Golden Star which offers Chinese and Japanese food as well as vegan options in both. I really enjoyed the mock Pepper Steak and left happy, but full! What a great way to end my first day in New York. 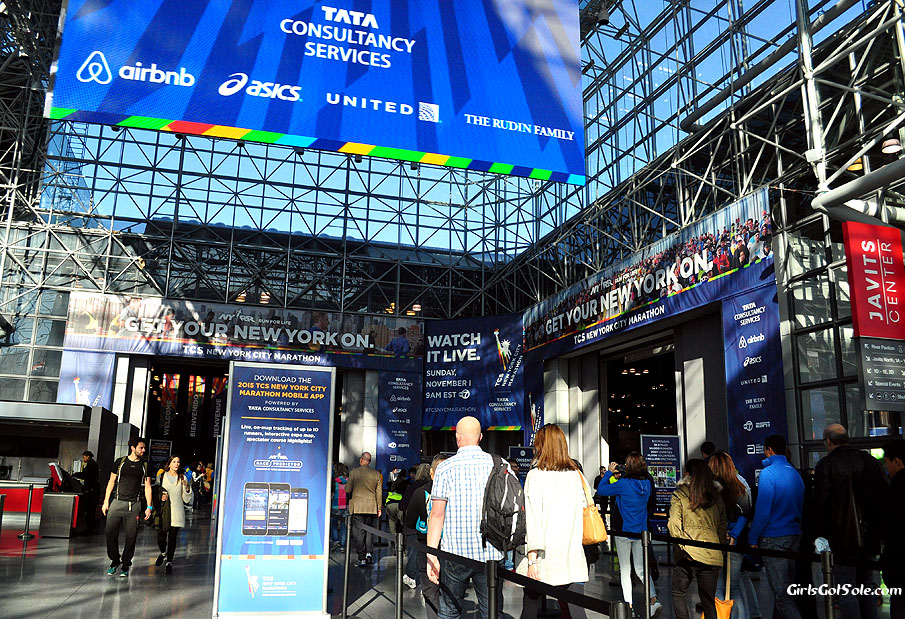 The next morning, mom and I were taken to the local Long Island Rail Road train station to head into the city. It was expo day! I was definitely excited and ready to get into NYC. This was where things were going to become real, it was time to pick up my race bib! Upon arriving at Penn Station, mom bought a coffee while I picked up a smoothie. I would later wonder about my choice of an iced cold drink as we emerged from the station and began our walk to the Javits Convention Center. It was a bit chilly for this Florida girl. Mostly, it was the cold wind that made it a little colder than I would have liked. But hey, it’s better than the crazy humid weather back in Florida!

Entering the convention center, the size of the hall with the race expo was quite impressive. I know my excitement of being there was a big part of that as well. I was there, I was finally at the expo to pick up my bib for the NYC Marathon. I found myself taking a deep breath as we entered the hall and searched for where to pick up my race number. Finding the line for my number range, I got behind a couple of other runners. And then, it was my turn. I handed my registration form to the volunteers and smiled. Or, I think I smiled. Maybe, I held my breath, then smiled. When they pulled out that white and blue bib with my number, a wave of emotions came over me. I surprised myself and didn’t cry, instead a big smile formed on my face. My dream race bib was then handed to me. That bib felt like a million dollars…no, it was more than that, it was priceless. A dream that I had been dreaming of had something physical for me to hold on to, if that makes sense. That bib represented so much to me. It was something I was blessed with, getting into the lottery on my third attempt, and it also represented all of the training I had put in. 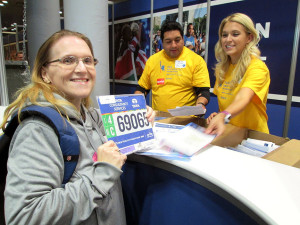 After checking my timing chip and getting my race shirt, mom and I entered the madness that was the official merchandise section. It was extremely crowded, like very much so. It was difficult to move around in some spots. Somehow, I managed to find an official race jacket (after debating on which one), a couple of t-shirts, and the race water bottle. Then the next challenge awaited, the line to checkout. I felt as though I was waiting in line at a theme park, it was long and winding. Fortunately, the cashiers were doing a good job of getting people through the line and checked out as quickly as possible. Nevertheless, by the time I paid for my gear, I felt as through I had been through some sort of additional race weekend challenge. The remainder of the expo floor was also crowded with fellow marathoners and their families and friends. I was able to check out a few booths and talk to some companies. My mom was having some bad neck pain unfortunately, so my time checking things out was cut shorter than originally planned. I did get to most of the booths and things I wanted to, and so we headed out of the expo.

I found a neat little vegan eatery not far from Penn Station and had a delicious lunch there. It’s a very small place, with just a few seats, but they definitely had quite a lot of business. The name of the place is V Life. I hope to be able to go there again next time I’m up in New York City in the next year or so. The two of us then checked out a few touristy shops in the area before heading back into Penn Station to catch a train back to Long Island. 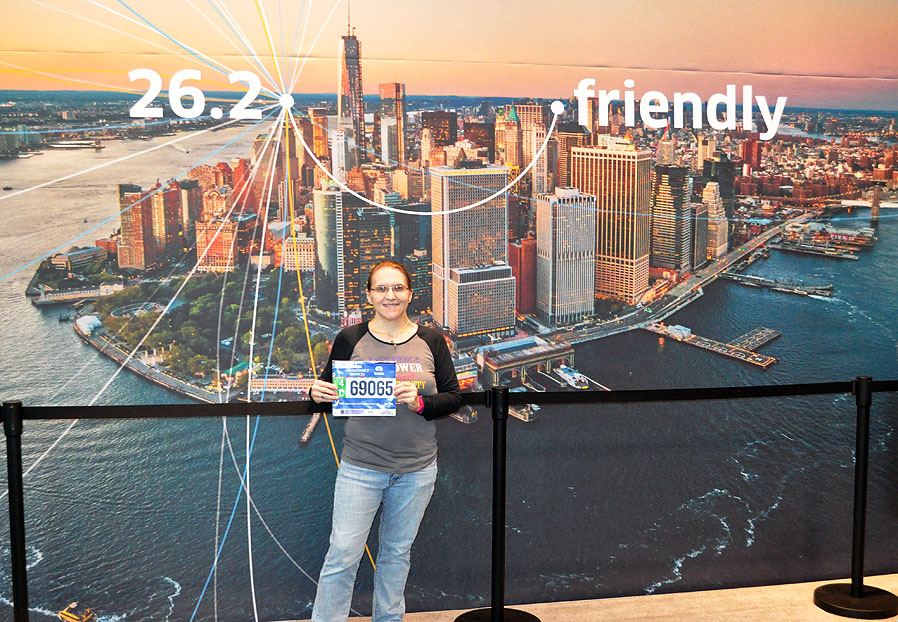 Photos with your race bib are a must at the expo. 🙂

My cousin picked us up from the train station once we were back in Patchogue and on the way back to her place, we stopped and picked up some yummy acai Bowls from Super Bowls in nearby Sayville. Believe it or not, while I have had acai smoothies, I had never had a bowl before. It was amazing stuff! They put in acai, fresh granola, bananas, strawberries, blueberries and coconut. Soooo good! It was also very filling. I will be trying some of the acai bowls from around Orlando, but since Super Bowls makes their own granola, I’m not sure they will quite match up.

There you have it for part one! I’ll post about the Marathon route motor-coach tour in part two which I did on Saturday morning with a fellow Orlando Galloway runner friend. Also, I ended up returning to the expo on Saturday for some more fun. 🙂