On Friday night, I had the chance to go to the sold-out Night of Joy event at Disney’s Magic Kingdom. Night of Joy is an annual weekend of Christian artist concerts and this was my second year attending the fun. Last year, I was fortunate enough to get media passes and attend on Saturday night. Night of Joy is always a crowded event, and this year was definitely no exception. In fact, the 2014 event was sold-out for both Friday and Saturday nights. I won four tickets from Z88.3 and couldn’t have been more excited to go.

After work, I drove to meet my friends who I had invited to come with me. We met near Disney at the nearby Crossroads plaza so that we could just take one car into the theme park. The traffic was HORRIBLE. Not to mention that it was raining. A drive that should have taken me maybe 45 minutes tops took me over an hour. Then, when I got to the plaza, I managed to lock my keys in my car while trying to find my poncho (which I later discovered wasn’t even *in* my car). Talk about a dopey move when you have to be somewhere. My shocked look as I realized what I had just done and had to tell my friends must have been priceless. Their first response was, “seriously?” Then, they were kind of amused. I suppose if you can laugh at yourself when you’ve done something dumb, it can help ease the pain of the moment. Thankfully, one of the girls has AAA, so she called them, as not only were my keys locked in my car, but the tickets for that night as well. Fortunately, it only took 30 minutes for the guy to come to pop the lock on my car door. 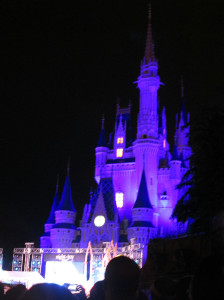 Finally, after a bit of unplanned fun, we were on our way to the Magic Kingdom. Sadly, we were going to miss most of Matthew West’s performance due to “key incident,” but otherwise, we would be good to go for seeing most everything we wanted to. As we parked and then walked in, it was still raining. It wasn’t a real hard rain, but it was consistent. After talking the monorail from the ticket and transportation center, we arrived at the entrance and walked onto Main Street USA. Matthew West was on the main stage in front of the castle performing. We listened a bit as we walked over to check out Building 429. Night of Joy has three stages; the Castle stage, Galaxy stage, and Rockettower stage. The latter two were located in Tomorrowland.

Building 429 had quite a crowd at the Rockettower stage and they were great. We listened to three or four songs and then decided to begin heading back toward the Castle stage as Chris Tomlin was going to be performing there shortly. Even though we got there about twenty minutes before showtime, we were quite a ways toward the back of the pack of people. Ellis and Tyler from the Z88.3 morning show introduced Chris Tomlin before we knew it and the singing commenced. Chris Tomlin sang some favorites including, How Great Is Our God, God’s Great Dance Floor, and Your Grace Is Enough. We left a few songs in to ensure we arrived at the Galaxy stage early enough for Mandisa’s performance at 10:25pm.

When we got over to Tomorrowland by the Galaxy stage, quite a line had already formed. Apparently, they were holding people back from getting in too early. We didn’t wait too long though, as they let us in at about 10pm. Once inside, while we were still a bit of a way from the stage, it wasn’t too bad. It was the closest we have been to any of the stages that evening. We chatted a bit and before I knew it, Suzanne and Deano from Afternoons on the Z were on stage welcoming everyone and introducing Mandisa. 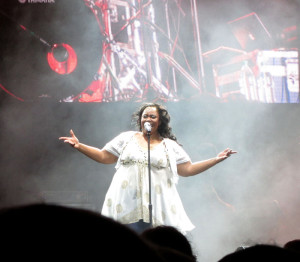 This was the third time I was seeing Mandisa performing and I knew her show would be awesome. She is such an amazing artist and advocate for Christ. She sang a number of her radio favorites; Stronger, Overcomer, Good Morning (with a surprise appearance by Danny Gokey), My Deliverer and Only the World. She put on a great fun performance from the heart. She puts her all into her songs and you know just how much she loves the Lord.

Mandisa performed for about an hour and then we headed out and walked to Main Street. It was then that I decided to go back with one of my friends, since she had met the three of us at the ticket and transportation center. She agreed to take me back to my car which was nearby. The other two girls stayed behind to watch Hillsong United perform on the main Castle stage. I would have liked to have stayed, but I was just too tired and knew that I needed to get back home. I’m not a night owl anymore. 🙂

Night of Joy 2014 was a fun evening despite the rain. I am thankful for the chance to go again this year and enjoy some of my favorite Christian artists. I hope to be able to go back next year.

Wednesdays theme for #31daysofskirtlove is Inspira

Yesterday's #31daysofskirtlove was about Kindness.

Love one another. #bibleverse #lovegodlovepeople

This morning's run was a hot one! I think the humi

Mondays during July's #31daysofskirtlove is about

Bike workout at home this morning before work. Sle

Believe in yourself! Such an easy thing to say, bu

Hit the gym late this morning for a bike workout.

This weekend's theme for #31daysofskirtlove is Lov