↓
Home Menu ↓
Home→Blogging→Musing of Mine 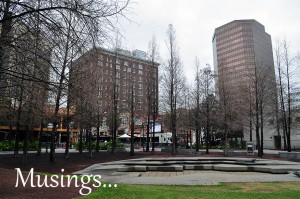 I thought about naming this post Monday Musings or Musings of an Anxious Girl, but alas, I didnâ€™t. The former just seems to reek of the need for more creativity in the title department (I mean, anyone can name a most using a weekday in it, right?), and the latter just seemed needy or a cry for attention (okay, while I admit I do like some attention, I mean who doesnâ€™t? But, I am not that needy, or donâ€™t believe I am anyway). So, there you have it, Musings of Mine. Errr, okay itâ€™s still a bit lacking, but letâ€™s just pretend itâ€™s great and move onward. J

On Saturday, I got up early (like before 5am, which is early) and ran with my Galloway group for almost 6 miles. It was supposed to be six miles, but some of us were content that we arrived back at the starting point shy of the goal. I had to do four hours of required over-time with work, so thatâ€™s pretty much my excuse for settling with the lower mileage. I got some Starbucks goodness (a post-Saturday run tradition with myself) and went home. A good perk of working from home is that I could just turn on the work computer, log in and go. No driving through traffic and surrounding myself with sick co-workers to contend with (not that I donâ€™t love my co-workers mind you, but they can keep their germs to themselves). After four hours, which felt like more were over, I logged off the computer and got ready to go out for the day to do errands and such.

I wasnâ€™t out long before I began to feel like crud. At first, I thought maybe I had eaten something different, but I couldnâ€™t really think of anything. Then, after a bit, I started to realize that the trouble might be related to my back. It wasnâ€™t hurting per say, but it was a bit uncomfortable. I remembered I have experienced similar feelings in the past with my injury. Of course, thinking that might be the problem, I was concerned. I have a marathon in just over two weeks, not a good time for an issue. So, I picked up some icy hot patches, got some much needed lunch and went home to relax for the rest of the day, hoping that would be the best thing to do. The remainder of Saturday was spent watching television and doing not much else.

On Sunday, I ended up sleeping in until almost 11am which is just about unheard of for me. This meant that I missed church which I was regretful about. I felt groggy when I rolled out of bed and tried to embrace what was left of the day. I had hoped to see my parents, as I havenâ€™t seen my mom since Disney Marathon weekend, but she has been sick with a really bad cold and congestion. She seemed to think it wasnâ€™t the best idea for me to come over as she knows my big race is coming up soon. The decision was up to me, but she was definitely letting me know that it may not be advisable even though sheâ€™d like to see me. So, I opted for the safe side and decided to just stay in Orlando. I ran some errands and began to feel some better than the previous day. I was cautious, but prayed the back woes would calm down, at least until after the marathon. I think the problem is all the extra sitting with the 10 hours of over-time I had to do last week (yes, required).

All I can hope and pray for is that this back stuff is temporary and calms down this week. I don’t think the running is the cause of any of it, so it’s got to be all the sitting. Today, I did my best to get up from my chair more often and stretch and walk around some. I still feel like it’s not back to what it was, but I’m optimistic. Hoping I can run in the morning with my group and the just getting out there will be a help.

How was your weekend? Did you have a race or event?