Today, I ended up spending the day in a way I wasn’t expecting. I ended up at the Mazda dealer. Lilly (that’s my car, if you read my blog regularly, you may know that), was in need of service. I was told on Saturday that my back shocks were shot and they needed to be fixed asap. This was the information I was given by Tire Kingdom when I had my alignment and rotation done. So, I called the dealer this morning to find out when to go in, as my car sounded awful and even though I was informed it was safe to drive, I was nervous about it. They told me I could come in today, so I jumped at that since I wanted to get things done. Also, my cd player has been broken (won’t take or eject discs), so that needed attention.

Fast-forward to my appointment, I brought Lilly in and the waiting game began. I would have much preferred to be at work making money, but sometimes, things just come up that need attention right away. At least I had a nice conversation with a Full Sail student as I waited. He had just moved down here from Michigan for school and was in with his Mazda3. About an hour later, the service rep came in and told me that my car’s shocks were fine, there was nothing wrong with them. My thought was, say what? I was baffled and asked the service guy why my tires were now no longer good if it wasn’t the shocks. Mazda claims the tires just got worn and it happens. Uh, okay, I don’t necessarily buy that, but what else can I do?

So, I left there (they are ordering what is needed to repair my cd player) and headed for Discount Tire. Now, I needed to buy four new tires. Something I wasn’t looking forward to, but kind of was prepared for by now. Unfortunately, I wasn’t prepared for how much I would have to spend. All I can say is, thank goodness for 6 months same as cash credit financing! I’m going to be paying these tires off for the next six months. I’m really hoping that the bonus we’re finally getting again this week is a good one, I need the money! 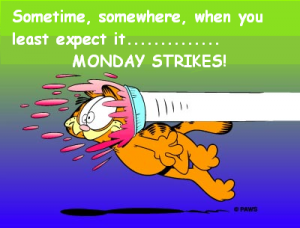 This past weekend was also a mixed bag of “fun.” My marathon training is now in full swing, so on Friday nights, I need to get a good night’s rest since I have to get up early to run. I had a 4am wake up call this past Saturday since I was up for support (I am doing water/Gatorade support for the training season). I asked my roomie to please be courteous and keep the house as quiet as possible since I needed to sleep. Did not happen, the friends she had over were in and out of the house slamming the door and laughing loudly. I woke up at least half a dozen times because of all the racket. Eventually, I ended up getting out of bed and pounding down the stairs to tell them to keep it down. Didn’t work, as the noise never calmed down. Needless to say, I got maybe 3 hours of sleep before my alarm went off. To say I was peeved would be putting it lightly.

I opted to not approach my roomie until she was alone and until I was calmer. On Sunday, I talked to her, explaining that I understand she wants to have a good time and have friends over, but that this training is important to me. WE have now hopefully come to a mutual understanding on the issue. At least I hope we have. I want to get along with my roomie as it makes life in the house a lot easier. However, I also need her to have the same feeling and respect that I do for others. Guess we shall see how that goes.

Sunday thankfully was a lot calmer and I was able to rest more on Saturday night. I had a great bike ride after breakfast which was a great way to start my day. I also ran my first shopping errand on my bike. I picked up some local veggies from a guy who sells organic in College Park and then went to Publix to pick up a few groceries. The grocery store is just over two miles from my place, so it’s definitely more than doable to bike there and back. I also did a lot of cleaning and such around the house on Sunday, and ran a couple of other errands. It’s nice to be able to get some things done and get some relaxation in.