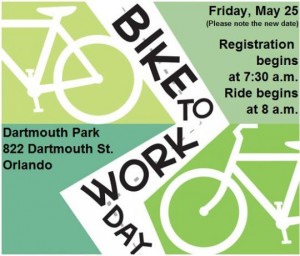 This morning was Orlando Mayor Buddy Dyer’s Bike to Work Day. Ride was from Dartmouth Park in College Park to City Hall in downtown. Since Dartmouth Park was close to me, I left my house at about 7:15am. I haven’t done a group bike event in awhile, so I was excited about this one.

After ending up going to the wrong Dartmouth Avenue (Google maps is not always reliable for cyclists, learned that firsthand this morning), I made it to the ride start just minutes before it was to start. I signed in under Cycling Savvy, meet up with the group and was ready to go.

We had a police escort on this ride which is nice, but definitely not the way rides usually go (stop lights were ignored with the police blocking off streets). The ride was pretty smooth, and the weather ended up being nice for it. Still hot, but we had a breeze a few times which was welcoming. Good day for a ride! 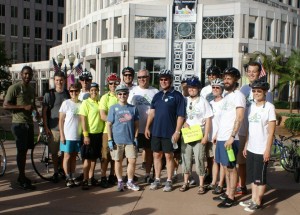 When we arrived at City Hall, Mayor Dyer did the awards for the groups with the most riders. There are awards for city teams as well as non-city teams. Cycling Savvy ended up winning first place in the non-city group category. Definitely was nice to hear as the team tied for second place at last year’s ride.

I enjoyed the ride, despite now being tired after biking home through some headwinds. My body needs to get used to pushing through those! I’m glad I went out to do this ride, it’s a great event. Now that I’m living in Orlando, I hope to be able to make it out to more group rides.

Are you a cyclist? Where do you ride?