This weekend, I did my first real long run of the season and for my 2nd marathon. On Saturday, I ran 12 1/2 miles with my Galloway group. I haven’t run that long since March when I ran my last half marathon, the Sarasota Half. So, my legs are used to between 6-8 miles at most the last couple of months. I knew this run would be a big harder as I got the mileage back up again. 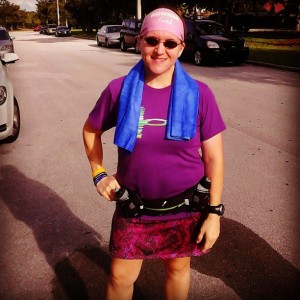 After the run sporting my Frogg Togg cool towel.

We started at 5am and boy was it still humid as heck out. The group leaders opted to use 30:60 intervals (run for 30 seconds then walk for 60 seconds), and at first I wasn’t sure that I liked this choice. But, after a bit, it kind of grew on me. With the heat, it was the right interval to go. There were 16 or so of us at this point, some of the runners would later split off into two groups, one going eight miles and one going ten or more miles.

Despite not being a fan of the brick surface, I do like running through Winter Park, especially when we get to run down Park Avenue. It’s pretty neat, and quite different in the dark. Running by the bakeries and other eateries always provokes talk of food (hey, we runners love to eat). Seeing the chocolate shop made me think of the Mocha Cookie Crumble frapp I was going to have post run.

A good thing I’ve started to carry on runs is a small washcloth. I get it wet with the ice cold water at one of the water stops and it feels oh so good on the back of your neck during these hot runs. It is definitely something to consider carrying with you and hanging on your iFitness belt or whatever running belt you use when you run.

Once we got back to the school (we meet at a local middle school), four of us headed back out for another 2 1/2 miles as we were up to 10 miles at that point. By this point, I was pretty wiped, but I pushed through to get in the miles I needed for my training. I was glad that we did the shorter intervals today after it was all said and done. I think I am learning to like it after all. 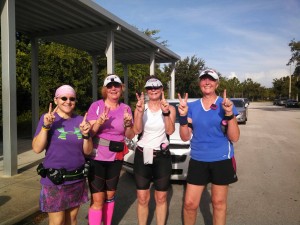