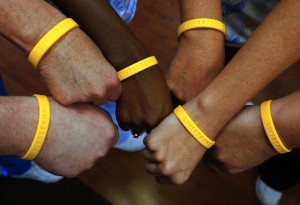 Just like many of you, I tuned in to hear what Lance Armstrong had to say last night to Oprah. After backing this man, a man that I thought was a great athlete, I left the interview feeling let down and just sad.

It’s not the actual doping that bothers me as much as the lies and deception do. Lying is one of my least favorite things in the world. It’s a horrible trait for a person to have. With Lance, it’s not just one lie, it seems to be lie stacked upon lie here. And, from what CNN says about the interview, Lance has only begun to tip the iceberg on what the whole truth really is.

I’ve been staring a lot at my yellow LiveStrong bracelet since last night. A part of me wanted to pull the thing off and chuck it. But, I didn’t do that. This is for two reasons, the biggest of which is that LiveStrong is a charity that has done a lot for cancer patients. It has brought millions of people together to fight for a cure for cancer. That is a cause I have and will continue to stand behind.

The second reason is that I believe that I can and will forgive Lance. The Bible says, Be kind to one another, tenderhearted, forgiving one another, as God in Christ forgave you (Ephesians 4:32). So, I will forgive him, I just wish he would come totally clean on it all. I mean, why go halfway? Just put your cards on the table and take your lumps. No, it’s not going to be easy, and it’s going to suck, but he did do this to himself. You have to take responsibility for your actions.

What do you think about the whole Lance ordeal? Will you still support LiveStrong?