↓
Home Menu ↓
Home→Blogging→Jingle all the way…

Whew, what a whirlwind last few days! I feel as though I’ve been busy practically non-stop. It’s amazing how quickly the holidays come and go when it’s all said and done. Since I’ve been working a lot (due to over-time), it’s kind of all a blur since last Friday. 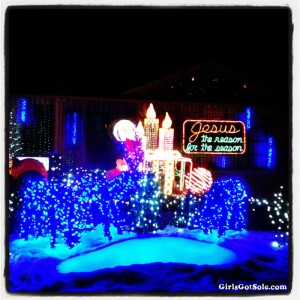 This house had all sorts of great lights that went along with music. The lights were programmed to “dance” with the songs. So neat.

On Saturday morning, my Galloway running group did a Christmas run! We got all jingle-belled up (that’s a word, right?) and had a good time despite the 38 degree frigid temps of the morning. I had planned on wearing my new green Skirt Sports skirt with a festive top and Christmas knee socks, but the colder temps just made that not happen. Instead, the night before I scrambled and ended up wearing my new Skirt Sports tough girl skirt (which is ocean/aqua, with black pants, so sort of greenish), my OUC half marathon tech shirt and my Jingle Bell run long sleeve tee on top of that. I ended up adding a pullover because I was so cold (yeah, I am a wuss, ha). The others in my group were dressed in layers as well, some with added reindeer antlers and santa hats. 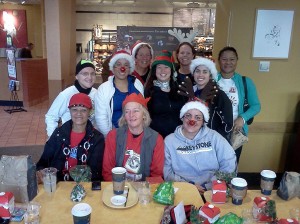 Some of my group, the Dream Chasers after our Christmas fun run.

We ended up running 5 1/2 miles after planning on doing 6 miles (the cold made us ready to stop when we got back to Panera even though it was a little short). We all then had breakfast at Panera and enjoyed chatting before everyone went on their way to finish shopping and such. It was not only a great way to start off the weekend, but ended up being the most festive event of my Christmas holiday.

I finished up some shopping on Saturday after coming home and putting in an hour and a half of over-time (working at home does make doing OT a lot easier). I stayed away from all malls and just went to a couple of stores. And then, I bought a new cell phone. Merry Christmas to me, I guess. 🙂

On Sunday morning, I got up and got ready for church. Since the church I have been going to wasn’t going to have a service (they were only having services on Christmas Eve), I went to a friend’s church which is about 20 minutes away. I have been to her church a few times and the people are really great. It was a beautiful service and was so nice to hear that people had been wondering how I have been doing. The church really cares about people and that’s why I think I’m going to be going back there on a regular basis again. I feel welcomed there unlike anywhere else I’ve been in a long time.

After church, I went to Whole Foods and picked up the pies for Christmas as well as the other food stuff needed. I then drove over to my parents house and dropped it all off. I ended up hanging out there a bit longer than planned, but it was nice to spend time with my mom. Once I got back home, I got to baking. I baked a cinnamon coffee cake (from the Compassionate Cooks cookbooks) as well as some cinnamon oatmeal cookies. The baking went pretty well considering I’m a bit slow since I don’t bake that often. I was glad that I got the cake done most of all, as I had been wanting to bake it for Christmas morning. I had baked the same coffee cake a couple of Christmas’ ago and it was a big hit with everyone. 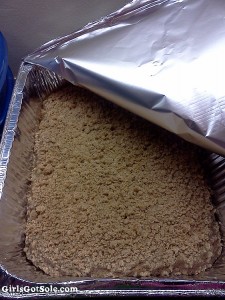 On Monday morning, I logged into work at 9:30am for what ended up being a loooonnngg workday. I was scheduled to go in at 11am, but logged on early to put in some more overtime. It wouldn’t have been so bad but every doctor’s office was closed (I work doing authorizations for a pharmacy), so there wasn’t much we could do but fax, fax, and fax some more. I could not have been happier when it was finally 8:00pm. I then packed up my clothes and such as well as my birds into the car and headed to my parents house. I was spending the night so that I didn’t have to drive over in the morning.

On Christmas morning, I woke up and headed out the door to run. I put in just over 5k and was pretty happy with my pacing. The weather was pretty nice overall. The over-eating began slowly thereafter. I had a few too many cookies and pieces of coffee cake. Then later, I had a lot of spaghetti (what we all had for dinner). Not to mention a piece of pumpkin, then apple pie. I was so full and could not remember the last time I felt that way. Thank goodness I never do that anymore. Really made me think how I used to eat that much food (or more) all those years before I lost weight. 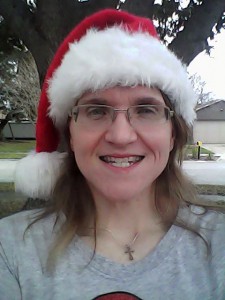 I spent the rest of the day with my family watching A Christmas Story and A Christmas Story 2. It was a nice day overall, I just wish I had been off on Monday or today, as I had to go right back to work this morning.

How was your Christmas holiday? Did you travel to visit family? Did you get stuck working?

Hill run with some of my group this morning. Was a

If you openly declare that Jesus is Lord and belie

Bike workout before work this morning. Got in a li

11 miles on the bike today for cross-training. Sle

8 mile run this morning with my group. Was more hu

This morning's sunrise during my run. Couldn't cho

Be merciful, just as your father is merciful. #b

Let yourself rest. Sometimes, we just need to rest

When you find a gel that your stomach tolerates, i