Yesterday, August 9th was coined, Jeff Galloway Day here in Orlando. Well, at least for this year. 🙂 The Olympian and running coach came out to Orlando to do a fun run first thing in the morning with the Orlando Galloway group as well as any other local runners who wanted to join in. Jeff then put on his Running School at Track Shack, a three-hour long session covering his run/walk/run program, nutrition, injuries, and mental training. This year’s running school event had quite the turn-out with friends from nearby Lakeland Galloway in addition to Orlando Galloway program runners. 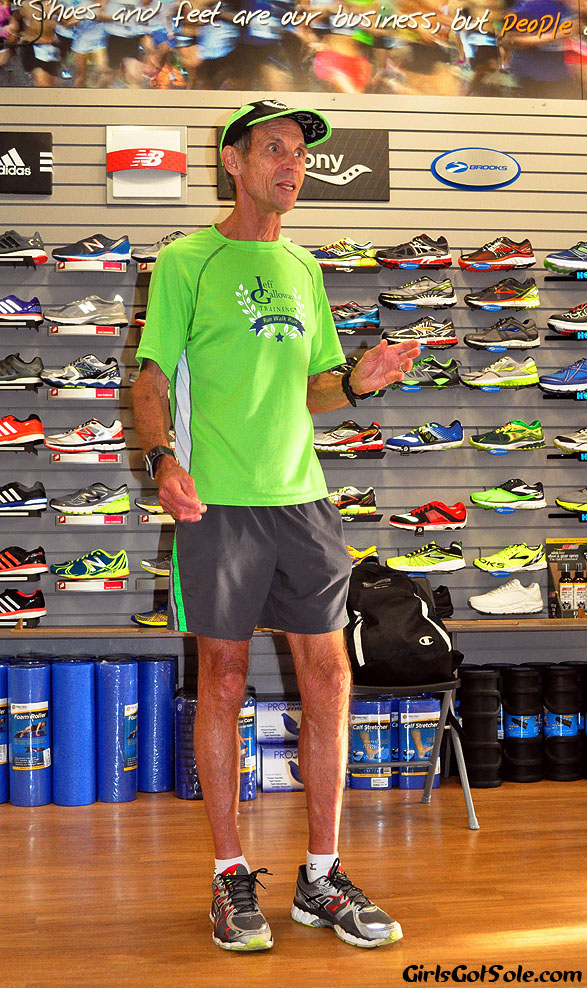 This year’s school was my third time attending and I always learn something new each year. Jeff is an amazing teacher and run coach for thousands of runners all over the world. I know here in Central Florida, we are grateful that we get opportunities to see him a few times a year since he is always in town for runDisney events. We usually get to see Jeff Galloway for our summer marathon training kickoff in June, but he was over in Japan getting his training programs started in that country.

The first thing Jeff spoke about was the monkey mind. This is the portion of our brain that monitors stress during our runs. Negative and anxiety hormones result from this monkey brain. This part of our brain also makes us feel pain more intensely. While this monkey brain is a million times better processing things, it is the cause of our physical stress. In order to gain control of this monkey brain, we need to work on cognitive thinking with things like mantras on our runs.

The run/walk/run method with the Jeff Galloway program is based upon more than 60,000 instances based upon the magic mile time trial. Strategic walk breaks help you go faster. Our ancient ancestors ran 200 yards at a time, they mostly walked. This allowed them to go out and do many miles at a time, because of the walking. We get great benefit from these planned walk breaks. This is used from training all the way through to race day. 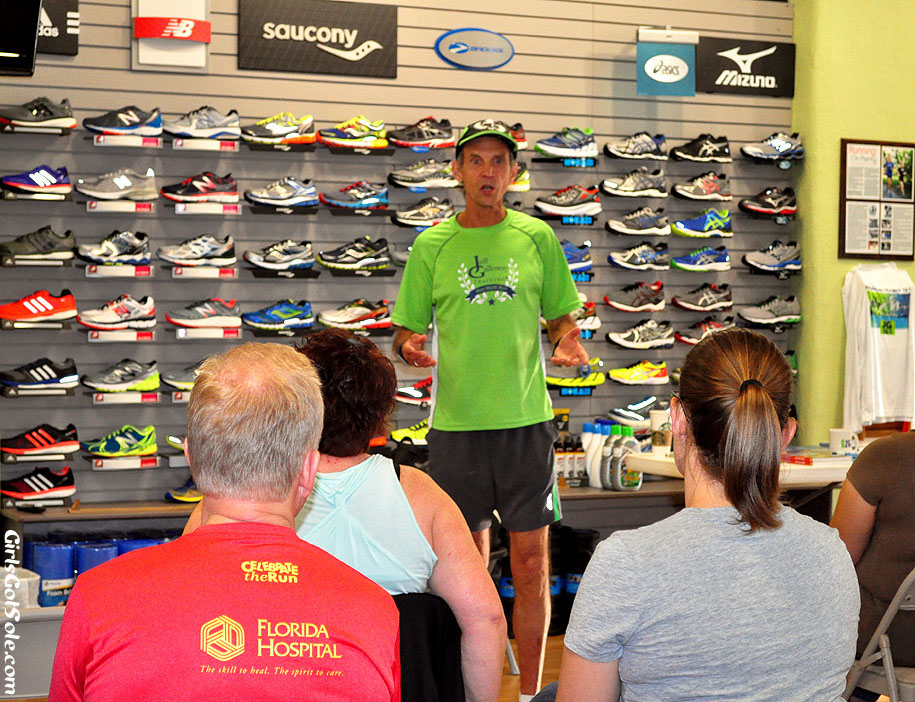 When it comes to training runs, Jeff continually states that you cannot go too slow on a long run. The Kenyans (who as we all know are amazingly speedy) also slow down when they train for 2-3 minutes per mile. “If it’s good enough for the Kenyans, it’s good enough for us”, says Jeff. In addition, if you have to walk some of a training run, you will still get the same benefit from those miles as you would if you run/walk/run that workout.

As far as the weather is concerned, there is a slow down depending upon the temperature. You would slow down 30 seconds per mile for each 5 degree above 70 degrees. Here in Florida, that means we have to really slow our pace during our training runs, especially this time of year. Jeff again reiterated that you cannot go too slow on a long run. That is good to hear when the temperature is 90+ degrees outside!

Talking intervals when you run, Jeff has changed this year to walking no more than 30 seconds no matter what run/walk/run interval you are doing. He informs that his studies have shown no further benefit results from walking more, and in fact, it can slow you down as most people tend to walk slower. When choosing your interval for a given run or race, it is a matter of preference in combination of what pace you want to do. What works for one person may not work for another. He explained that some of his e-coaching clients do intervals anywhere from 45:30 to 5:20 (run being the first part of that interval), so experimentation is recommended.

Stretching is always a topic of discussion at running school. Jeff states that no study has shown a benefit for distance runners. In fact, there are a lot more injuries resulting from doing the stretching. There is more risk for you to stretch. Jeff absolves all of his training program runners from stretching duties. 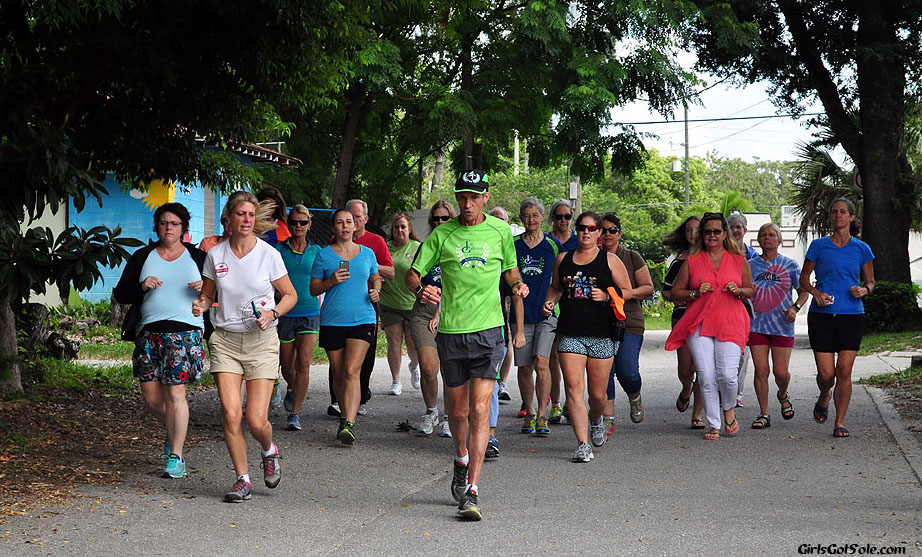 If you want to work on increasing your pace, Jeff recommends three different workouts. The first is speed mile repeats the weekend after a long run for marathoners. Run at 30 seconds faster than your race pace goal. Half marathoners would do 1/2 mile repeats. You take your time goal and half is walking while the longer segment of this workout would be running. The second speed workout you can do is cadence drills. Use a 30:30 timer, count how many times one foot touches the ground for the first round. Then the next round would be working to increase that number, up to eight times. It’s a steady progress exercise, work up to more rounds each time you do this. Third workout is acceleration gliders. These can be done once or twice a week and you should do them four to eight times.

Mental training is such a big subject for marathon runners. We have to work just as hard on our mental training as we do our physical training. Jeff has an entire book on this and I previously blogged about it. Definitely worth having in your running book collection. What you can do is do race rehearsals in order to set yourself up for success on race day. You plan and act everything out just as if it were the real thing. This gives you confidence and allows you to visualize the big day. These can be done a few times, as many as you want or need. Magic words are a big tip from the coach. They allow you to control your frontal lobe and keep positivity flowing. His magic words are relax, power, glide. Repeat this over and over to yourself as needed. And, if you need it, there’s dirty tricks. These are quick fixes for getting you through a tough spot during a race. Jeff uses his example of a rubber band. He imagines putting this rubber band around a chosen runner ahead of him, then putting it over himself so this runner propels you to push and eventually get past him or her. This helps YOU be in control and call the shots. Sure, a dirty trick like the rubber band is silly once the monkey brain gets a hold of it, but it’s all about getting into that frontal lobe and controlling your brain.

Jeff went over much more than this, and I have covered a number of his tips, advice and previous running school sessions on this blog. His personal website is a great resource for so many of the things he discusses, especially on his blog. He has a number of published books, some focusing just on certain topics as well. His training program book is chock full of much of what is discussed during running school. I still reference to that book four seasons in with his program.